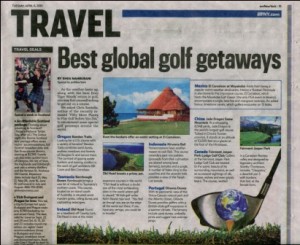 Fifty More Places To Play Golf Before You Die was recently featured in AM New York (circ. 337,000 Manhattanites). Other press enquiries are welcome -- nay, strongly encouraged!

Writers like myself with products to peddle (like books) pray for good press — or any press!  I’ve worked around the marketing communications business for some years and often try to facilitate positive press placements…usually to no end at all.  But then again, sometimes manna (or, in this case, headlines) fall from heaven.  Shortly after the release of my first golf book (Fifty Places To Play Golf Before You Die), a publicist at Stewart, Tabori & Chang informed me that a magazine called Real Simple had expressed interest in possibly including the book in their Christmas Round-Up List.  Not being much of a super-market visitor or a magazine reader in general, I replied “That’s great” and turned my attention back to the pitch letter that might land me somewhere toward the middle of the local PennySaver (if things went well).

A few weeks later, a friend called my wife and told her that she’d seen my book in Real Simple.  “Ha!” I laughed.  “My publicist said that it might be there.”

Over the next two days, I watched the book climb and climb, finally reaching #33.  I believe that I only emailed my friends and family once every half hour or so during this period.

Then, though December was still days away, it began dropping.  The problem:  OUT OF STOCK.  (That’s another story.)

But the point is, there is a very real strength in good press, and even if its difficult to correlate sales precisely to press clippings, I can say that I’ve had no other books in Real Simple since 2005…and no other books that have reached #33.