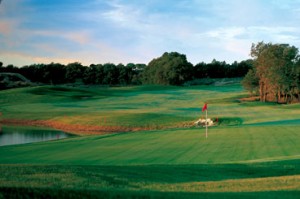 The view from behind the green on the 13th at PGA Cataluna, Tour Course (formerly known as the Green Course).

“When Jim Dondero and I decided to start an upscale epicurean golf travel company, we attended the PGA Merchandising Show in Orlando (the show is held each January),” Gene began.  “We wanted to get a sense of what venues might be a good match for what we hoped to offer our clients.  The Spanish Tourism Board was exhibiting at the event, and we stopped by to chat.  I have to admit that I didn’t know too much about Spanish golf beyond Valderrama and Sotogrande.  We were asking about quality golf venues in the La Rioja region, as the fine vintages coming from there would cover the wine-tasting side of a visit.  The representative said that there was no golf to speak of in Rioja, but there’s good golf a bit east in the region of Catalonia – at PGA Golf de Catalunya.  I’d never heard of it and had been around a bit, but I made a mental note.  When we did a visit to Spain and France later that year, we visited and played the Green Course (the resort’s tournament venue), as we visit all of the destinations that we represent.  While it doesn’t have all the grand trappings of a private club like Valderrama, it was as close to pure golf as you can find on the Continent.  The standards of course maintenance are a little bit differerent in Spain than in the states.  When you get away from the very top rung of courses, you get a rapid drop in quality.  When we see a course built and maintained to U.S. standards, it catches our attention.”

Spain is not an unknown destination for golf travelers.  British and Irish citizens frequently find their way to Costa del Sol in the south for an infusion of Vitamin D and mild weather golf.  Catalonia and its largest city, Barcelona, see far fewer golf visitors, though many flock here to frolic on the beaches of the Costa Brava that stretch north from Barcelona.  Catalonia lacks the depth of courses that Costa del Sol can claim, and for some this speaks in the region’s favor.  “There are some wonderful courses in the south with great vistas of the Mediterranean,” Gene continued, “but there are times when your tee shots are framed by rows of condos.  Barcelona is a genuine Mediterranean city and affords visitors a more authentic experience.  After a few days in Barcelona, a visit to Catalunya is a fine escape to the bucolic countryside of the Costa Brava.

PGA Golf de Catalunya is the creation of PGA European Tour Courses, an entity that was initially formed as a joint venture between IMG and the PGA European Tour.  The company owns and manages a network of courses across Europe with the goal of building and maintaining properties of a quality could host a major tourney.   The company’s holdings include courses in Portugal, Germany, Norway, Finland, Estonia and Ireland.  The two courses at Catalunya were laid out by European Tour professionals Neil Coles and Angel Gallardo, who between them hold 25 European Tour titles.  (Coles also shares a distinction with Sam Snead, being the only other player to win a professional tournament in six different decades.)  “The Green Course at Catalunya is a parkland layout, with dense stands of cork oaks and umbrella pines,” Gene said.  “There are several lakes on the property, and vistas of distant mountains.  Overall, it’s a challenging design, but not overly finicky.

“I found the series of holes from 11 through 13, which approach and work their way around one of the lakes, especially compelling.  The 11th is a 190-yard par-3, and plays downhill with a drop of 40 feet to a large green.  It’s more visually intimidating than actually difficult, so long as you make note to club accordingly, as the lake begins behind the green.  Number 12 is a 540-yard par 5, working gently uphill.  You play your tee shot over the corner of the lake.  There’s a large cork tree that guards the green on the left; if you’re too close to the tree, your approach is blocked, so you have to think the second shot through carefully.  The 402-yard par-4 13th comes back downhill toward the lake; there’s a superb view from the tee of the course and surrounding countryside.  The green sits up on a little plateau and has water in front, water to the right and water behind.  There’s a great premium to hitting the fairway on this hole, even if means hitting a fairway wood or long iron off the tee, as you don’t want to try to hit this green from the rough.”

Catalunya is not the sole club of interest in greater Barcelona.  Thirty minutes west of the city is Real Club de Golf El Prat.  This club used to be near the beach, but was moved recently to its current location in rolling countryside near the town of Terrassa where Greg Norman Design constructed 45 holes.  “On some courses where you slice and dice nines, the different sets of holes have radically different feelings,” Gene observed.  “At El Prat you can fashion together many different combinations, but there’s a consistent feeling throughout.”  Gene even found a track worth visiting near Rioja.  “There’s a little public course up in the forested hills called Izki Golf,” Gene added.  “It’s a Seve Ballesteros design.  You may not see top-flight course conditioning here, but it still offers excellent quality golf in close proximity to one of the world’s greatest wine regions.

Before visiting PGA Golf de Catalunya or any other area courses, Gene urges clients to linger a while in Barcelona.  “It’s simply an amazing city,” he enthused.  “Anyone remotely interested in food needs to experience the tapas bars and La Boqueria, one of the world’s great markets.  Not only are the seafood and produce remarkable – the merchants are the best-dressed I’ve ever seen.  An architectural tour of the city is also in order.  Whether you like Antoni Guadi’s work or not, you must see it.  One of his buildings – the Sagrada Familia church – has been under construction since 1882, and it’s not slated for completion until 2026.  However, you can still walk through.”

Gene A. Holland, Jr. is principal and co-founder of CORK & TEE (www.corkandtee.com), which offers customized epicurean golf travel.  He was a member of the varsity golf team at the University of North Carolina at Chapel Hill, where he played with notables such as Davis Love, III and Jack Nicklaus, II.  Following his collegiate playing days, Gene spent eleven years as a club professional, earning his PGA Class A membership and honing his skills as a player, golf instructor and administrator. After receiving his MBA from UNC’s Kenan-Flagler Business School, he worked nearly five years as a commercial banker before launching CORK & TEE.

Getting There:  PGA Golf de Catalunya is near the town of Girona, which is 65 miles from the airport in Barcelona.  Barcelona is served by most major carriers.

Accommdations:  The Meliá Golf Vichy Catalán Hotel (+34 972 181 020; www.meliagolfvichycatalan.com) is located in the midst of the Catalunya course.  In Barcelona, Gene was impressed by the five-star Casa Fuster (+34 932 553 000; www.hotelcasafuster.com.)