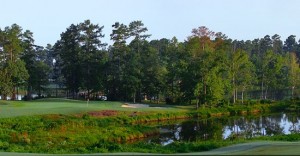 The par-4 16th at the Lake Course at Grand National, one of the 22 courses scattered over 11 sites along Alabama's RTJ Trail.

Watching the out-of-state traffic speed through Alabama en route to points south circa 1990, Dr. David Bronner had an epiphany of sorts.  He surmised – quite correctly – that the trunks of many of those cars held golf bags.  And he believed that there was no good reason why many of those sojourners would not linger in the Heart of Dixie to tee it up…that is, if there were high quality, affordable courses for them to play.  Three wouldn’t be quite enough.  Nor would five.  Or ten.  18 would be just about right.  And since Dr. Bronner was CEO of the Retirement Systems of the state of Alabama, he had access to the capital that was necessary to make it happen.  Still he needed someone to take what some considered to an enormous gamble and make it a winner.  That someone was Bobby Vaughan, then a director of golf at Tanglewood Park in North Carolina.  He also needed a big name to hang on the project and garner the publicity that was necessary to make it work; why not go after the living legend, Robert Trent Jones, Sr.?

That’s exactly what he did.  Mr. Jones was retained, Bobby Vaughan assembled a crack team, and the project took hold.  $120 million, a few closed door negotiations to secure the land that was donated by corporations and municipalities, many bulldozers and three years later, seven sparkling new golf complexes – three with 36 holes, four with 54 holes — stretched over 300 miles from Mobile on the coast north to Huntsville at the foothills of the Appalachians.  The Robert Trent Jones Golf Trail was born.

It must give Dr. Bronner wonderful satisfaction to know that the Trail is now Alabama’s number one tourist attraction…and tourism is the state’s number one industry.

As Robert Trent Jones’ chief design associate at the time, Roger Rulewich had his hand – quite literally – in the design of every one of the 324 holes of the original trail (six more courses have been built since the initial Trail was conceived).  “Most of our work wasn’t done from plans,” Roger recalled.  “We developed a rough layout for a given course, and the next day started constructing it.  Almost all the design was on the ground.  Having the support of the pension system, we were able to do things I wouldn’t have ever imagined doing.  When we decided there was something spectacular that might be done, we could generally do it.  Some sites were not defined in terms of acreage until we were done; we established the property lines after the fact.  I can’t imagine a better way of working.  We had a sizable budget – and the permissions – to do what we wanted to create something great.  It was a magical thing.”

The Robert Trent Jones Trail is an amazing accomplishment, not simply for the vision of its progenitors and the scope of that vision, but for the incredible quality and individuality of each layout.  There’s no mass production on the Trail, just the inspiration that may have come with the semi-delirium of the most frenetic, largest scale golf construction project in the history of the game.  “Bobby Vaughan and I would leave from one site and head to the next.  We thought the site that we left was our favorite, and it was, until we got to the next one.  We put everything we had into every course.  The sites Bobby selected were distinctive and different; he didn’t want to repeat the same course again and again.  We fell in love with each of them.”

Another facet of the Trail that’s truly amazing is that it’s difficult to pay more than $67 for a green fee.  Sweet Home Alabama, indeed!

The complexes on the RTJ Trail – Cambrian Ridge, Capitol Hill, Grand National, Hampton Cove, Highland Oaks, Magnolia Grove, Oxmoor Valley, Ross Bridge, The Shoals, and Silver Lakes — are each very different, but share some common characteristics.  The 54-hole settings have two 18-hole courses (one out and back, one with returning nines) and one 18-hole par-3 course.  The 36-hole complexes have three returning nines, and a nine-hole par-3 layout.  These par-3s are not your standard pitch and putts; some holes come in at over 200 yards, and they’re as well thought out as their 18-hole neighbors.  Another characteristic that the courses all share is an abundance of tee boxes – up to 11 on some holes, amounting to as much as 3,000 yards difference between the front and back – which give the less gifted golfer some hope of maintaining their equilibrium.  From the blues, blacks or purples (yes, purples), these courses pose a supreme challenge.  Finally, there’s an absence of homesites around the courses, and ample beauty.  “I remember Dr. Bronner saying ‘The only house I want to see on these courses is the clubhouse,’” Roger said.  “He wanted golf courses that stood on their own, not part of an overall development scheme.”

There are simply too many fine layouts, too many interesting holes on the Trail to go into much detail.  Some highlights are Grand National, where Jones, Rulewich, Vaughan et al had 600-acre Lake Saugahatchee to work their magic around and over, including the picturesque 230-yard  peninsular green 15th on the Lakes 18; the Canyon nine at Cambrian Ridge, which offers more topographical change then you thought possible on a southern course, including a 501-yard par 4 that descends 200 feet from the back tees; and the River Course, the only Robert Trent Jones, Sr. layout in the world lacking a single bunker (this due to concerns that the river, which is prone to flooding, would make maintaining traps a nightmare).

“One of the great compliments we’ve received about the Trail is ‘We don’t see anything repeating itself,’” Roger said.  “Doing that many courses at the same time made this a challenge.  Each hole we cut or shaped, we never thought of the other courses.  We looked at each hole as making a statement about the kind of golf hole we wanted to build.  We weren’t consciously trying to avoid being repetitive.  I don’t think we ever attempted to make comparisons, or even avoid comparisons.  It just worked out.”

Roger Rulewich is the chief golf course architect and principal of the Roger Rulewich Group, LLC, a company he formed in 1995 in Bernardston, Massachusetts after 34 years with Robert Trent Jones, Sr.  He was accepted into the American Society of Golf Course Architects in 1974, and served as President for the 1987-88 year.  Roger has been the principal force in the design, remodeling and field direction of more than 150 courses throughout the United States and the world.  His list of credits include the Robert Trent Jones Golf Trail; the Apple Rock Course in Horseshoe Bay, Texas (selected as Best New Resort Course of 1986 by Golf Digest); Metedeconk National Golf Club, a private course in Jackson, New Jersey; and the Crumpin-Fox Club in Bernardston, Massachusetts, rated the best public access course in New England.

All the courses on the RTJ Trail are situated within 15 miles of the interstate, and each course lies within two hours of the next.  Many may choose to begin at the northern or southern ends of the Trail, Huntsville or Mobile, respectively.  Others may begin in the middle near Montgomery or Birmingham.  All are served by domestic carriers.  Even playing 36 holes a day, you’ll need two weeks to play them all, should you decide to do it in one shot.

The original seven golf complexes on the RTJ Trail have increased to eleven, including Cambrian Ridge, Capitol Hill, Grand National, Hampton Cove, Highland Oaks, Lakewood, Magnolia Grove, Oxmoor Valley, Ross Bridge, The Shoals, and Silver Lakes.  Greens fees range from $43 in the low season (winter months) to $64 in the spring, with fees at Ross Bridge, Lakewood and CH Judge somewhat higher.  Tee times are available 15 days in advance of play; value packages can be booked by calling 800-949-4444 or visiting www.rtjgolf.com .

If you book a package through the RTJ Trail, hotels can be arranged for you, with prices averaging around $50/night per person.  A comprehensive list of accommodations is available from the Alabama Department of Tourism (800-Alabama; www.touralabama.org).