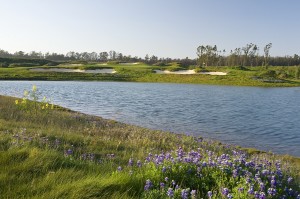 The Challenge Course at Monarch Dunes (in Nipomo, California) is ranked in the top ten of the nation's par-3 courses. (photo courtesy of Monarch Dunes)

On May 1st, more than 150 golfers lined up to plunk $100 down to play a 13-hole par-3 golf course called Bandon Preserve, at the Bandon Dunes Golf Resort, on the coast of southern Oregon.

This is not your father’s chip & putt.

Par-3 courses are a frequently overlooked facet of the golf world, a playing field that’s not taken completely seriously.  As the name implies, the holes are all fairly short – generally 200 yards or less – and can hypothetically be reached by players of modest ability in one shot.  Par-3 layouts are generally not sanctioned by the United States Golf Association, and hence need not adhere to any particular rules.  Some might be 9 or 18 holes, though you’re almost as likely to come upon 6-, 10- and 12-hole layouts.  Par-3 courses are frequently perceived as practice areas, an extension of the driving range, and somehow not quite “real golf.”  Given this shaky status in the pantheon of golf course experiences, it’s no surprise that many par-3s have received somewhat less care in design and maintenance than, say, a U.S. Open venue.

“When I was learning the game, I played par-3s pretty regularly. My mom would drop me off and say ‘Here’s ten bucks, I’ll get you in 3 hours, have fun,’” said Drew Rogers, ASGCA, a golf course architect based in Toledo, Ohio.  “Sometimes you’d  have to search hard to find a guy that you could pay.  The holes were pretty pedestrian and didn’t have much in the way of features. The greens were all identical circles, usually crowned, and they were often lighted for night play.  Not much effort was ever put into their creation or their maintenance.  It was always fun to play the par-3’s, but I wouldn’t label my experiences then as anything too special.”

“If you were to review every par-3 course in America, most would fall into the ‘rudimentary’ category,” said Ron Whitten, Senior Editor/Architecture for Golf Digest.  “However, the same can be said for most regulation golf courses.  Par-3’s play an important role.  They are the sandlots of golf, where people can go to build a passion for the game.  After World War II, par-3s started to appear in greater numbers, thanks in part to the efforts of architect Geoffrey Cornish, who built many short layouts.  These were entry-level courses, created with the hope of getting people interested in the game.  With a little luck, beginners could hit some greens, maybe even make some birdies.”

The roots of par-3 golf can be traced to Great Britain.  The first known par-3 course opened for play in Portsmouth, England in 1914, primarily for the diversion of non-golfing vacationers.  Short courses gained some competitive élan in 1933 with the launch of the Short Course Professional Championship, now known as the British Par-3 Championship.  Irish golfers also advanced the cause of short courses, forming the Irish Pitch & Putt Union in 1961 to govern competitive events.

While the image of par-3 courses is decidedly downscale – flat, monotonous, unimaginative are descriptors that come to mind – short need not be ugly nor unchallenging.  Noteworthy examples include the par-3 course at Augusta National, which has holes that replicate some of Augusta’s greens and approach shots.  There are also par-3s at Pine Valley in New Jersey and at San Francisco’s Olympic Club, where this year’s U.S. Open will be held (on the regulation par-71 course).  “There’s a par-3 tournament held at Augusta the day before the Master’s begins,” Whitten continued.  “It’s been televised the past few years, and that’s done a lot to elevate the status of par-3 golf.”  Public golfers will find fine par-3 layouts in Alabama along the Robert Trent Jones Golf Trail (a series of golf complexes spanning the state), in California north of Santa Barbara at Monarch Dunes, in northern Michigan at Treetops Resort…and now in Oregon, at Bandon Dunes.

There’s reason to think that golfers will see resurgence in the popularity of par-3 courses.  First, there’s the economics; short courses don’t require as much land, and the holes are cheaper to construct and maintain.  Demographic trends also favor short courses.  “People have less time for golf, and you can get around a par-3 in just an hour and a half,” said Mike Keiser, the owner of Bandon Dunes Golf Resort, which features four regulation courses.  “And baby-boomer golfers are getting older.  Many of our clients used to play 36 holes a day for several days.  Bandon is a walking only facility, and some of these players simply can’t walk 36 anymore.  When I mentioned to some regulars that I was considering a par-3 course – a memorable par-3 course – to a man, they said ‘Hurry up and build it.’”

Does one think small when envisioning a smaller golf course?  Not necessarily.

“Philosophically, we approach the design of par-3 courses the same way that we approach a full-length course,” said Bill Coore, ASGCA, of the golf course architecture firm Coore and Crenshaw, creators of Bandon Preserve.  “No different design tenets come into play.  I’ve always felt that short par-3 holes can be some of the finest holes in golf.  They negate the need for strength.  An 18- or 20-handicap player can hit a shot that’s as good or better than the shot a tour player can hit.  Par-3s balance the playing field, and that makes things fun.”

The 13 holes at Bandon Preserve range from roughly 80 to 175 yards, and unfold on undulating land that slopes gradually to the Pacific.  The fescue turf, the shape and speed of the greens, the bunkering are all in keeping with the look and feel of the long courses at Bandon.  “Our directive was to build the best holes we could find on the available land, holes that would fit in on the other courses,” Coore continued.  “We thought Mike (Keiser) might be concerned when we came up with 13, but he said, ‘I don’t care.  I’m not superstitious.’

“I don’t think Bandon Preserve will be perceived as second class golf,” Coore added.  “Even the little 78-yard 8th hole will hold its head up.  ‘I may be little,’ it might say, ‘but I’m in your face.’”