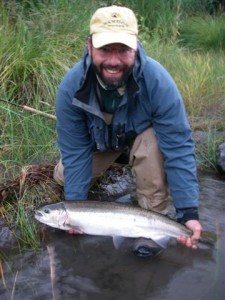 The author with a native Deschutes steelhead caught during a float of the lower river, from Mack's Canyon to the Mouth.

The Deschutes River slices through the center of Oregon, flowing some 300 miles north from its humble beginnings at Little Lava Lake in the Cascade Mountains to its terminus at the Columbia River.  In the lower 100 miles from Pelton Dam to the Columbia, the Deschutes is a powerful, even imposing, river.  The rugged, 2000-foot tall basalt canyons and high desert environs that envelop the Deschutes augment its stark beauty; a river of such fecundity seems misplaced amidst such stark, sagebrush surroundings, a veritable oasis.

The oasis of the Deschutes offers anglers a double bonanza – wild rainbow trout and summer steelhead.  “The Deschutes is a singular rarity, in that it supports a prolific endemic wild trout population, as well as the best floating line steelhead fishery in the lower 48,” says Mark Bachmann, who’s fished the Deschutes since the early 70’s.  “During the fall, an angler can chase steelhead in the morning and evening, and fish for redsides during the day.  Not a bad combination!”

Deschutes redsides are a subspecies of rainbow trout called “Desert Red Band Trout“ or Onchryncus Mykiss Iridus.  They average between 13” and 18”, with some larger fish to 24” landed each year.  While not extremely large by some western river standards, these fish are broad-shouldered, extremely strong and understand how to use the Deschutes’ powerful currents to their advantage.  Many Deschutes anglers will recount occasions when they’ve hooked a 26” fish, battled it for 15 minutes, and finally brought it to hand to find that they’ve actually been fighting a 15” redside.

The rich biomass of the Deschutes provides well for its residents.  “The Deschutes has a PH level of 8, which makes it one of the most prolific insect generators you can imagine,” Mark continued.  “It’s a bug factory.”  Caddis make up a significant part of the redside diet through much of the year, and patterns mimicking various stages of their lifecycle – pheasant tail beadheads for nymphal stages, soft hackles for emergers, and elk hair caddis for adults – are standard fare.  Stoneflies also make up a significant part of the trout’s diet.  If the fish won’t move for dries or smaller nymphs, a Kaufman’s Stonefly fished close to the bottom will often stir up some action.  Fish pockets close to shore; the redsides are seeking cover from the river’s rapid flow just like you.

The stoneflies lead to an annual frenzy in the upper 60 miles of the lower Deschutes – the salmon fly hatch.  From mid-May to mid-June, these orange bundles of protein emerge from the river and crawl up the branches of riverside cottonwoods and alders.  When the wind blows, fish move under the trees and slurp away.  Action doesn’t generally last through the day, as it doesn’t take too many of these bugs to satiate the fish.  If you catch it right, however, it makes for a memorable morning.

While the redside fishery alone is enough to merit the Deschutes special status among western rivers, it is the steelhead runs that bring anglers in droves.  “Deschutes steelhead are very aggressive, and inclined to take flies near the surface,” Mark said. “I believe this occurs because of the size of the river, the water temperature, its coloration, and the shade the canyon provides.  You have all the factors for a good surface-oriented fishery working in your favor on the Deschutes.”

The Deschutes offers summer steelheaders a particularly long season of fresh incoming fish.  Three distinct runs of fish enter the river.  A run of hatchery-bred fish generally commences in early July, and is made up of fish average 6 to 12 pounds.  They are followed by a wild run of fish – the “A” run – that enters the river in later July and August, and is comprised of smaller fish in the 4 to 6 pound class.  From September through November, another run of wild fish (the “B” run) enters the river, and is comprised of fish weighing from 10 to 16 pounds. Because the Deschutes runs several degrees cooler than the Columbia, many steelhead aiming for upper Columbia tributaries take up temporary residence in the river, adding to the fun.

“The Deschutes is a premium waking fly river,” Mark offered.  “Though I believe the most reliable way to catch fish is to fish a darker wet fly just below the surface.”  The Deschutes has spawned a number of hair-wing patterns, including the Mack’s Canyon, the Streetwalker, and the Freight Train.

A key to success is finding water where steelhead are likely to rest, and where you can present your fly at the right speed.  Ideally, water should be moving at the speed of a slow walk, be three to six feet deep, and include structure, such as boulders or ledges.  Deschutes anglers deploy the classic dry line steelhead approach:  cast across and slightly downstream, throw a mend in the line to slow the fly down, and let the fly swing down below you.  You’ll want to keep a loop of line in your hand, as the fish will often grab the fly gently on the swing and swim back to its lie with the fly in its mouth.  If you set the hook prematurely, you’ll pull the fly away.  When the fish feels the steel, it will often set the hook itself.  Then all hell breaks loose.

“I’ve had fish take me 3/10 mile down the river,” Mark reminisced.  “Keeping up with a hot fish like that on the slippery basalt is no small feat!”

A certain magic descends upon the Deschutes in early fall, when the sun dips just below the top of the rimrock canyons, casting shade and cool across the green waters.  Anglers rise from their siestas to congregate at the reliable runs above Mack’s Canyon, throwing successively longer casts down and across, down and across.  Sometimes, as one of the Union Pacific freight trains chugs by on the tracks that parallel the river on the western side of the river, you’ll hear the click-click-click of line slowly leaving the reel.  The clicks soon accelerate into a scream, as though the angler has hooked into the train itself.

Mark Bachmann has been catching steelhead with flies since 1963, and now is part-owner of The Fly Fishing Shop in Welches, Oregon.  He also guides steelhead anglers over 80 days a year on the Sandy River and the Deschutes.   An FFF certified fly casting instructor, Mark is the author of the Sandy River Steelhead Journal, and has worked tirelessly to preserve the Sandy River watershed.

Prime Time: Prime Steelhead season is August through October.  Redsides fish well from mid-May through June and then again in the early fall.

Getting There:  Maupin and Madras, Oregon are both roughly two hours from the Portland International Airport.  While many anglers float the Deschutes to cover the most possible water, a bumpy (though passable) access road gives landlocked anglers access to over 30 miles of the river.

Accomodations: The towns of Maupin and Madras generally serve as headquarters for Deschutes trips.  Neither town is known for its opulent accommodations, though several reasonably priced motels are available in each town.  Maupin options include the  Deschutes Motel (541-395-2626) and Imperial Lodge (541-395-2404).  Some outfitters conduct multi-day float trips on the river; camping out is a wonderful option, as it gives you first crack at good steelhead runs at first light on your “camp water”.

Guides: There are a number of guides that work the Deschutes; during the peak of the steelhead season or the salmon fly hatch, it takes some ingenuity to find good water.  Three good choices include: Mark Bachmann (800-266-3971; www.flyfishusa.com); Brian Silvey (800-510-1702; www.silveysflyfishing.com) and John Smeraglio (541-395-2565; www.flyfishingdeschutes.com).

Equipment: If there was a river built for spey rods, it’s the Deschutes.  A spey outfit in a 7 or 8 weight (13’ or 14’) allows you to throw a long line with less fatigue, even in areas where there’s limited back casting room.  A spey rod lets you cover more water, and in steelheading, the more water you cover, the better your odds.  A floating line and 150 yards of backing, with a nine foot leader tapered to 1x and tippets from  six to ten pounds will work for most situations.  Later in the season when the water cools, a sink tip can be handy.  Proven wet fly patterns include Mack’s Canyon, Freight Train, Street Walker, and the Fly DuJour, in sizes 4 and 6; for waking patterns, bring Afterdinner Mints, Muddler Minnows and Steelhead Caddis, in sizes 4 and 6.  For trout angling, a 9’ 5-weight outfitted with floating line is ideal, with 9 foot tapered leaders in 4x or 5x and tippet from 3 to 6 pound.  Hatches vary greatly with the season – consult a local fly shop before visiting.  NOTE:  Angling from the boat is not allowed on the Deschutes, and the river is powerful and the bottom slick.  A wading staff and cleated wading shoes are strongly recommended.

(from Fifty Places To Fly Fish Before You Die)