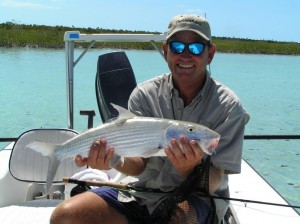 While shepherds were whacking bits of dried sheep dung around the spongy coastline of eastern Scotland in golf’s formative days, in the late 15th century, sportsmen and women to the south, in England, were tinkering with the use of artificial baits in what would come to be known as fly-fishing.

The two sports share more than their ancestry. Both tend to appeal to those with contemplative, even analytic, temperaments. Both can arouse a powerful, even obsessive, fascination among the faithful, as well as a never-ending accumulation of gear.

The connection between golf and fly-fishing first struck me 10 years ago, when a fishing guide recounted a day when he had taken Tiger Woods and Mark O’Meara out on the Deschutes River in Oregon to cast flies for steelhead.

As my friend recalled this special day on the river, I noted that many golfers I know fly-fish, and vice versa. Perhaps it’s the outdoor setting, pitting man against an indifferent if not inimical nature, be it in the form of finicky trout or gaping bunkers. Perhaps it’s the similarity of the motions of swinging and casting — the fact that the ball or fly goes farther when you move smoothly.

“There’s never a locker room on tour that doesn’t have a fly rod in there,” said Davis Love III, a 20-time winner on the PGA Tour and the captain of the American Ryder Cup team. “Some of the guys will bring rods around with them on their practice rounds to make a few casts.”

Love said it was the lakes on golf courses that got him interested in fishing. He began dabbling in fly-fishing because several other players on the PGA Tour, especially O’Meara, Jack Nicklaus and Paul Azinger, enjoyed it.

Love has fished in places like the Bahamas and Silver Creek, in Idaho, but his current favorite fishing spot on the tour is the Blue Monster at Doral, near Miami.

“One of the ponds on the Blue Monster course has peacock bass,” he said. “You can see them hanging around the rocks way out. Sometimes a group of us will go out after the day’s round. You have to make your longest cast.”

For Nick Faldo, golf and fly-fishing are intimately connected. He said he became interested in fishing in 1986 when he was changing his swing.

“My doctor took me down to the River Test in the south of England to give me a break from the range,” Faldo said. “There’s a famous mayfly hatch that occurs on the Test at that time, known as Duffers Fortnight. If you can’t catch a fish then, you’ll never catch one. I was hooked.

“I find fly-fishing completely engrossing. I love the tranquillity, the sound of the river. When you come upon a rising trout that’s picky and you have to try six different fly patterns to get him to take, 30 or 40 minutes will fly by, and that fish has had your complete attention. When you’re fishing, you’re not clock-watching. You get lost in time.

“Fly-fishing is like golf in that you don’t get a second chance, especially when casting to a bonefish. You quickly learn to get everything right — cast, line position, drag. One thing wrong, and ‘bogey!’ — you lose the fish.”

Nick Price, winner of 18 tour events, including three majors, said one appeal of fly-fishing for golfers was the way the fields of play changed and demanded different techniques. “Each golf course has its own kind of beauty, though a parkland layout is quite different from a links course,” he said. “Likewise, a steelhead river in British Columbia is quite different than a chalk stream in England, though both have appeals. And both require different approaches to find success.”

“You can be playing in a major championship on Sunday, surrounded by throngs of people on the course, signing autographs before and after,” Price said. “A day or two later, you can be alone on a bonefish flat in the Bahamas. The seclusion fly-fishing provides is a nice balance.”

Ben Crane, a four-time winner on the tour, described fly-fishing as a “mental vacation” from the grind of the golf tour. “Playing on tour can be a little one-dimensional, as you’re constantly on the road, thinking about one thing: golf,” he said.

But when he is fishing, Crane gets to think about something else.

“When I’m out there, I think of only one thing for seven hours: what is the fish thinking?” he said. “You still have to be very focused. Where’s the fish holding? What’s the depth of the fly? Is it the right fly?

“In golf, saving one stroke a day can be huge; the difference between 72 and 71 can be $5 million. Likewise, in fly-fishing, little details can mean catching more fish. Out on the course, golfers tend to go all-in. The best fly-fishers also go all-in.”

This story originally appeared in the New York Times.