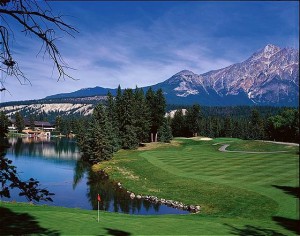 Players must skirt the crystal blue waters of Lac Beauvert on their approach to the sixteenth at Jasper Park Golf Club.

The promotional literature of the Fairmont Jasper Park Lodge includes the following guest book entry from 1925:

“A New York man reaches heaven, and as he passes the gate, St. Peter said, ‘I am sure you will like it’. A Pittsburgh man followed and St. Peter said, ‘it will be a great change for you.’ Finally there came a man from Jasper Park Lodge, ‘I am afraid’ said St. Peter, ‘that you will be disappointed.'”

The entry, penned by Sherlock Holmes creator Sir Arthur Conan Doyle, certainly speaks to the incredible mountain scenery of the valley where the Fairmont Jasper Park Lodge rests.  We can only guess what Doyle, an avid golfer, would’ve written had he had the chance to play the golf course, which opened the following year.

“When I first played the Jasper Park Golf Club, I had the overwhelming feeling that it might just be the perfect golf experience,” Bob Weeks began.  “The sun was shining, the scenery was incredible, the layout of the course was great.  I recall thinking that if a golf nirvana existed, this was it; it was as close to perfection as I’d experienced.  And I don’t even remember how I played!”

The golf course at Jasper came to be in part thanks to the Canadian National Railroad.  As the railroads pushed west across Canada in the late 1800s, great hotels were built along the way – a lure to put paying passengers on the train.  To the south in Banff National Park, Canadian National’s rival – Canadian Pacific Railway – constructed a golf course (including nine holes routed by Donald Ross) to complement the Banff Springs Hotel.  Not to be outdone, Canadian National’s Sir Harry Thornton commissioned Stanley Thompson, already a rising star in golf course architecture circles, to build a grand course in the valley near crystal clear Lac Beauvert, adjoining the Jasper Park Lodge.   It was not long before the Jasper Park Golf Club was praised as one of the greatest golf courses in the world.  (Soon after Canadian Pacific hired Thompson to upgrade their course, which would also become a world class golf destination.)

Bob first visited Jasper in the early 1990s.  “Being Canadian, I’d long heard about the historic Stanley Thompson courses in the Rockies, thought I didn’t know what to expect,” he continued.  “For starters, the drive into Jasper is stunning for a guy like me who grew up in the city.  At every turn, there’s a remarkable mountain vista.  You’re in a national park, and there are elk, mountain goat and bear walking along the road.  The lodge property itself is slightly understated – there’s a main building with a large lounge looking out on the lake and the mountains.  The lodge is circled by little cabins.  From the outside, you don’t expect them to be fancy, but they are, with a cozy fireplace.  When I made it to the course, I was expecting it to be hard; in the 90’s, the ethos was that a good course had to be difficult.  That wasn’t the experience at all at Jasper.  It’s not an easy track, but the playability is tremendous.  Thanks to the nuances of Thompson’s design, you experience it differently each time you play, yet you don’t feel beaten up.  Every time it’s enjoyable.  You never feel like you want to pack your clubs away.”

Stanley Thompson’s brilliance as a golf course architect is not widely recognized beyond Canada, but in recent years his work has been enjoying increased scrutiny and acclaim from design aficionados.  Thompson devotees may find difficulty reaching consensus on naming his finest design — Highland Links, Banff Springs, Capilano and St. Georges, along with Jasper, all rank high on the list – though no lesser luminaries than Alister MacKenzie and George Thomas placed Jasper amongst their favorites…anywhere.  The course beautifully illustrates two of Thompson’s signature design traits – an ingenious integration of course features with the natural surroundings, and elegant, imaginative bunkering.  “From some of the tee decks, your driving target is a mountain peak,” Bob described.  “When you closely investigate the mounding behind the greens, you’ll notice that they’re a perfect replication of the mountains in the background.  Every time I go around the course, new subtleties reveal themselves.  I always come away thinking that Thompson was a genius – especially when you consider the kind of earth moving equipment that was available in the 1920s.”  The bunkering at Jasper brings the notion of sand hazards to high art.   On the tenth hole (called The Maze, thanks to its 11 bunkers), one of the bunkers is in the shape of an Octopus; another is the shape of the constellation Boötes Arcturus.    “Thompson is said to have done much of his routing at night, riding around the grounds on horseback,” Jasper’s Director of Golf Alan Carter explained.  “One of those rides inspired the Boötes Arcturus bunkers.”

Speaking of surroundings:  being situated in a national park in the Canadian Rockies, the woods around Jasper are home to elk, black and grizzly bear, moose and even wolves.  To prevent larger ungulates from running amok on the greens – but to allow ranging carnivores to maintain their migratory travel patterns – a special fence has been constructed around the course; animals that are lower to the ground (like wolves) can pass through the bottom section of the fence.  Director of Golf Alan Carter related a recent incident when the course was closed thanks to the presence of a grizzly on the 8th hole; grizzlies always get to play through at their own pace!

There are too many defining moments at Jasper Park to give each its proper due – the vista of the “Old Man” mountain formation on the par 5 second hole, the blind tee shots on the par 4 3rd and 8th holes, the 3-hole jaunt onto the peninsula that juts into Lac Beauvert on the 14th through 16th.   For an appreciation of Stanley Thompson’s design prowess (and sense of humor), one must linger at the par-3 9th, dubbed “Cleopatra.”  The name is derived from the hole’s backdrop, Pyramid Mountain, and from the fact that it once took the general shape of a woman, reclining on her back.  The hole measures 231 yards from the tips, though with an elevation drop of 80 feet, it plays much shorter.   Seven bunkers adorn the hole, and three of these are well in front, though they appear closer from the tee.  These three bunkers were missing from Cleopatra’s initial incarnation; instead, there were two mounds that more than suggested a woman’s breasts.

The story goes that the Canadian National Railway owed Thompson half of his fee for laying out Jasper, and that he very well knew that Cleopatra would get the railroad’s attention.  It worked.  On Jasper’s opening day, Thompson accompanied Sir Harry Thornton on his first round.  When they reached the ninth, Thompson reported that Canadian National’s president simply stared down at the hole—and, in Thompson’s words, “blew a gasket.”  Cleopatra’s curves were soon replaced with the fronting bunkers, though not before Thompson received the balance of his fee.

Getting There:  Jasper National Park is almost equidistant from Calgary and Edmonton (about 5 hours drive), though the ride from Calgary is stunning – one of the world’s great drives.  Calgary is served by most major carriers.

Accommodations:   The Fairmont Jasper Park Lodge (866-540-4454; www.fairmont.com/jasper) has 446 guestrooms, each with an air of rustic elegance.  Many outdoor activities are available.  During high season, rooms begin around $500 CAD.