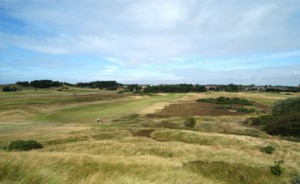 Though slightly inland, Southport & Ainsdale has a distinct links feeling.

“I love golf, but I also really enjoy English football (soccer),” Bob Wood began.  “Merseyside is home to some of England’s most outstanding golf courses, plus seven premier league football teams.  If you go over during the season (August through May), you can combine a fine game of golf with first-rate football spectating, even in the same day.  For me, it doesn’t get much better!”

The county of Merseyside in northwest England officially incorporates the boroughs of Birkenhead, Wallasey, Liverpool, Bootle, and St Helens, radiating north and south from the banks of the Mersey River.  From a golf visitor perspective, Merseyside can be said to extend north up the coast to Southport and Lytham St. Anne’s; from a footballer’s perspective, it reaches east to Manchester.  Tourism interests have dubbed the stretch from Blackpool in the north to Wirral in the south “England’s Golf Coast,” and with good reason – there are twenty courses within an hour (give or take) of Southport, including three venues on the current British Open rota:  Royal Birkdale, Royal Lytham St. Anne’s and Royal Liverpool.  Within 15 minutes of the seaside resort town (which has been likened to an English version of Carmel, California), there are five other golf links that could easily host an Open.  These include Hillside and Southport & Ainsdale.

The Hillside Golf Club was established in 1911 as a nine-hole layout.  Its first big change came in 1923 when the course was relocated to its current locale, literally a short-iron from Royal Birkdale, in the Birkdale Hills.  (Birkdale was relocated to its current site in 1899.)  The second big change occurred in 1967, when the redesigned course (featuring a new back nine) opened for play.  Many who have played both courses feel that Hillside is every bit the layout of its revered neighbor.  “The back nine is built into and around a series of huge dunes,” Bob described.  “The front is pleasant if unremarkable, but the back is easily one of the most spectacular nines I’ve ever seen.  The contrast is considerable.”  One peak on at Hillside is reached at the 11th hole, 508-yard par-5.  The tee rests atop a sand dune; once you’ve made the climb, you’re rewarded with a panoramic view of the Irish Sea, and a number of golf holes – both on Hillside, and at neighboring Royal Birkdale and Southport & Ainsdale.  “I played Hillside during the week of the British Open,” Bob continued.  “From the 11th, you can look right at the 18th hole, with the grandstands and TV towers.  I’ve attended a number of British Opens, but this gave me a very different perspective – seeing the venue from another world class golf course.” 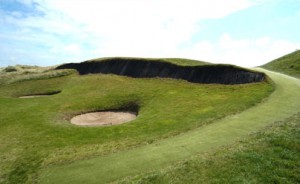 Railroad ties (or "sleepers") augment some of the bunkers at S&A.

Like Hillside, Southport & Ainsdale started its life as a nine-hole course, in 1906.  Not long after the club was relocated to its current location, across the train line from Hillside, and expanded to 18 holes.  In 1923, the new course received a facelift from Scotsman James Braid, a gifted player (and contemporary of Harry Varden) who won five British Opens.  Braid was nearly as gifted on the boards as he was on the fairways, designing or remodeling more than 200 courses around the United Kingdom, including redesigns at Carnoustie, Troon and Prestwick.  (There are several “James Braid Golf Trails” in Scotland for travelers seeking a slightly different Scottish golf experience.)  At S&A (as the club is affectionately known) he built six new holes and reworked twelve others among the sandhills, heather and gorse; 15 of the original 18 holes exist today much as Braid intended.  S&A has been called one of the finest links designs in England.  “Southport & Ainsdale is an authentic links layout, though it’s not directly on the ocean,” Bob said.  “It has a very natural flow, and the members there are quite friendly.  It made some of its reputation as the first course to host the Ryder Cup twice, in 1933 and 1937.”  The hole most likely to stay with you once you’ve left the S&A is the par-5 16th, dubbed Gumbleys.  (Braid was in the habit of naming each of his holes, this 5-shotter was named for one of the club’s founding members.)   You’ll aim your drive at a large bunker some 300 yards out, lined above with a bank of “sleepers” (English parlance for railroad ties).  From here, it’s a blind approach to a long narrow green, backed by a sprawling dune.

The appeal of a visit to Merseyside go beyond its fabulous coastal courses.  Manchester and Liverpool are thriving cities, a perfect counterpoint to the charming resort town of Southport.  (What Beatles fan could resist the chance to tour the boyhood homes of John and Paul, or to board a “Magical Mystery Tour” bus tour to see Penny Lane and Strawberry Fields in Liverpool?)  The Lake District, which inspired poets of an earlier age, is also an easy drive away and showcases England’s most beautiful mountain scenery.

And there’s the football.

In 2008, Bob had the chance to travel to Merseyside on several occasions, thanks in part to the hosting of the British Open at Royal Birkdale.  “My first visit was in May,” Bob recalled, “and one Sunday we drove out to Southport from Liverpool in the morning and played Birkdale.  We had the kind of weather that the players experienced during the Open – which is to say, five different kinds of weather!  We spoke to some members about the changes that had been made to the course in preparation for the tournament.  One of the most significant modifications was made to the 17th green.  When we got to there, it was out of character relative to the other greens on the course – knobby and multi-tiered.  There were only four or five spots where the pin could be placed.  It turned out to be an important hole during the Open—Padraig Harrington made an eagle here on the final day to seal his victory, while second place finisher Ian Poulter took 3 putts here on Sunday.  On Saturday, Anthony Kim eagled the hole as well, which put him in contention [Kim tied for 7th in the tourney].  After our round, we headed back to Liverpool and Anfield Stadium to see the Liverpool football club play Manchester City.  Liverpool is one of the best known clubs in the Premier League and Anfield is one of the most famous stadiums.  It was the ultimate day.”

Bob Wood is a 28 year veteran of Nike, who served as President of Nike Golf from 1998 to 2008. He was born and raised in Southern California, and majored in Viticulture at the University of California, Davis. His career at Nike started in 1980 and includes time as Vice President for Footwear Product Marketing and Vice President for USA Marketing. His passions include his family, playing electric and acoustic guitar, skiing, golf and of course, football. He supports Arsenal Football Club, based in London.

Getting There:  England’s Golf Coast is most easily reached from Manchester, which has non-stop service from New York on several airlines, including Continental Airlines (800-231-0856; www.continental.com).

Accommodation:  The England’s Golf Coast website (www.englandsgolfcoast.com) lists accommodations around Southport and beyond.  If you choose to stay in Liverpool as Bob did, Visit Liverpool (+44 151 709 8111; www.visitliverpool.com) lists lodging options – including the Beatles-themed Hard Day’s Night Hotel.