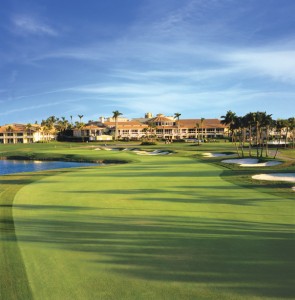 For anyone who’s ever stood over a three foot putt with a round of drinks on the line, the pressure of facing such a putt when there’s $1.2 million at stake – and there are ten or twenty million people watching you on television, some of whom are secretly hoping you choke – is almost inconceivable.  If that wasn’t enough weight on the pro golfer’s shoulders, the holes that the pros play are not known for being pushovers.

The factors that make for a difficult golf hole are as countless as the ways a once-a-week player can duff a shot.  Ominous water carries and endless deserts of sand can intimidate.  Deep rough and glass-like greens can frustrate.  And sometimes, certain holes just seem destined to come between the player and a decent score.  As six-time PGA Tour winner Steve Pate said, “There are certain holes that just get me every time.  On face value, they shouldn’t be difficult, but for me they always are.”

So what are the  toughest golf holes in America?  I asked four pros who’ve spent considerable time – and have had considerable success — on the tour to name some of the most difficult holes they’ve encountered.  Considering how many golf holes the pros face in a year on tour (over 500 for a player participating in 30 events), it’s surprising how many of the same holes showed up on our panel’s respective lists.  The first hole that came up is the eighth at Pebble Beach, a 416-yard par-4 that proceeds south along cliff sides overlooking Monterey Bay.  “It’s easily the most scenic as well as the hardest hole in the world,” said 2004 U.S. Senior Open winner and seven-time PGA Tour winner Peter Jacobsen.  “Even without the wind and rain that you’ll sometimes find there, it’s tough.”

Another hole that showed up is the twelfth at Augusta National, a seemingly benign 150-yard par-3…except for the wind.  “You’re hitting at a tiny target, and if the wind is blowing (and it often is), you just don’t know how far it is,” offered Steve Pate.

The fifth hole at Pinehurst #2 (site of the 2005 U.S. Open) is another hole that strikes trepidation into even the most gifted players.  “You have a downhill tee shot to a severely sloped fairway, which makes it a hard fairway to hit,” Peter Jacobsen said.  “The uphill second shot is to one of the historic table top Pinehurst greens that run away from the cup in all directions.”

One of the glories of golf is that on any given day, you can hit at least one shot just like a pro.  Pray to the golf gods that you save that shot for one of these fabulously difficult holes.

Mark McCumber has ten PGA Tour victories, including the 1979 and 1985 Doral-Eastern Opens; 1983 and 1989 Western Opens; the 1983 Pensacola Open; the 1987 and 1994 Anheuser-Busch Classics; the 1988 The Players Championship; the 1994 Hardees Classic and the 1994 TOUR Championship.  On the international circuit, he won the 1988 World Cup in Australia, representing the United States with Ben Crenshaw.  Mark also played on the 1989 Ryder Cup Team.  He is president of Mark McCumber & Associates (www.mccumbergolf.com), the golf course design division of McCumber Golf

Steve Pate has won six PGA events, including the 1987 Southwest Golf Classic, the 1988  MONY Tournament of Champions,  the 1988 Shearson Lehman Hutton Andy Williams Open,   1991  Honda Classic.  1992  Buick Invitational of California, and the 1998  CVS Charity Classic.  Steve played on the 1991 and 1999 Ryder Cup teams, and was voted 1999 PGA TOUR Comeback Player of the Year.  He is a principal in Pascuzzo & Pate Golf Course Architects (www.2Pgolfdesign.com), whose recent work includes Monarch Dunes in Nipomo, California.

Joe Rassett played professional golf from 1983 to 1995, with a four year hiatus due to an injury.  A four year All-American from Oral Roberts University, he had seven collegiate victories during his tenure.  Joe was a semi-finalist in the 1979 U.S. Amateur and lost to eventual champion Mark O’Meara, and was “king of the profession for a day” as co-leader of the 1983 U.S. Open (Oakmont) after two rounds.   Joe has served as the Director of Golf at Longboat Key Club (www.longboatkeyclub.com) and currently works at IMG Academies Golf & Country Club at El Conquistador (www.imgacademies.com).

The eighth hole at Pebble Beach, a 416-yard par-4, is renowned for its daunting second shot over a chasm of Monterey Bay.  Average players, lacking the might to position themselves properly for this approach shot and/or to carry the cove, would benefit their tallies by bailing out and laying up on the left side of the fairway.  But duffers don’t travel from all ends of the earth to play it safe, so take your best swing and drop a ball into the Pacific.  It’s all part of the experience.

The 12th at Augusta National is a diminutive 155 yard par-3 named “Golden Bell,” yet for more than one professional coming around Amen Corner, the bell ringing here tolls despair, as very decent shots can easily find one of the hole’s three bunkers – or worse yet, Rae’s Creek, which flows in front.  The problem is the wind.  “It’s always hard to figure this one out,” Peter Jacobsen said.  “The swirling winds make club selection almost impossible.”

Many – pros and duffers alike – consider this 476-yard par-4 among the most brutal golf holes anywhere.  “You drive to a blind fairway that slopes from right to left and runs away from you,” said Joe Rassett.  “If you hit a good drive, you’re still faced with a second shot of 180 to 200 yards on a downhill right to left lie that needs to be hit to an elevated green that sits at an angle that’s not conducive to a positive mental image.”

While the 7th and 8th at Pebble may hog the media spotlight, it’s the 462-yard par-4 ninth that worries the pros.  “It’s definitely the hardest hole for me at Pebble,” said Mark McCumber.  “It plays downhill, but a good tee shot leaves you on downhill lie.  You have an awkward stance for your approach shot, and your club is delofted.  Your target is a small firm green, with the ocean to the right.  You’d like to come up the left, but there’s a cavernous bunker waiting there.  I’d take a 4 there any day; I never played a tourney at Pebble without at least one bogey on the ninth.

Many feel that the 16th at Cypress Point comprises 231 yards of the most beautiful and challenging golf to be found anywhere.  “You have to carry some 220 yards over the Pacific Ocean to find the green,” Peter Jacobsen said.  “Add in a cross-wind, and it almost becomes a short par-4.”  Only three players have made a hole-in-one on the 16th, including crooner/golf enthusiast Bing Crosby.

Players teeing off at the 2007 U.S. Open at Oakmont have proven their mettle by the act of making it to this fabled tee.  But this 467-yard par-4 opener – voted the hardest opening hole in golf by PGA of America – provides little time chance to rest on one’s laurels.  “The fairway is just 24 yards wide with bunkering on both sides of the fairway,” Joe Rassett said.  Your second shot is roughly 200 yards downhill to a green that is notoriously fast and slopes from front to back and right to left.”

Mark McCumber offered a little clarification for the infamous 18th hole at Doral:  “People refer to the course as the Blue Monster,” he said, “but it’s really the name for the hole.”  The “blue” references the 449-yard par-4’s abundant water hazards on the left; the “monster” could allude to how one feels if they blow up here.  “It’s a difficult driving hole,” Mark continued, “and once you reach the landing area, you have a mid-iron (if the wind is blowing) into an angular green that’s fronted by water.  Pros have made doubles or triples here to lose.  If I’m up a few strokes in a tourney, I play it safe – drive to right rough, wedge to fairway, wedge to green.”

The Lake Course at the Olympic Club is known for the trees – approximately 40,000 of them – which line each fairway.  Though the course has no water hazards and only one fairway bunker, even slightly errant shots are severely penalized.  “I always found it extremely difficult to hit the fairway on number 17 (a 522-yard par-5),” said Steve Pate.  “You have to hit a draw to hit the fairway, and I hit the ball left to right.  If you’re not in the fairway, it’s a long haul.”

At 219 yards, the 17th at Bay Hill (home of the Bay Hill Invitational Presented by MasterCard) is one of golf’s more daunting par-3s.  “I’ve seen a lot of things happen there,” mused Mark McCumber.  “The green is L-shaped, and a typical tough pin is back right.  The hole is fronted by a pond and a deep bunker.  The pond wraps around behind the green.  You’re hitting a 2, 3 or 4-iron, and you only have 30 or 40 feet of green to work with.  If you don’t hit a perfect long iron, you can’t hold it.  There’s nowhere to hide.”