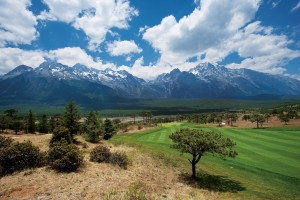 Modern China is a land of superlatives. That’s what you have to remember when you come across a golf course there that stretches 8,548 yards – Jade Dragon Snow Mountain – as of this writing, the world’s longest golf course.

The 2008 British Open at Royal Birkdale illustrated that a course needn’t be backbreakingly long (nor peppered with water hazards!) to be difficult; Padraig Harrington’s winning score on the seemingly modest par 70, 7,173 yard layout was a three-over 283.  Yet through the middle and latter part of the 20th century, courses kept growing.  Some say it was to accommodate advances in equipment; others, that it was to give bragging rights to certain architects, and to fuel the egos of those players with enough machismo to step to the back tees…though in the latter case, most have no good reason beyond unchecked ego to be playing from the tips!)  The 8,000 yard barrier was first broken in 1964 at Dub’s Dread Golf Club in Kansas City which measured in at 8,204 yards (it’s since been cut back by over 1,000 yards).

In 1972, the Pines Course at the International Golf Club in Bolton, Massachusetts was remodeled by Robert Trent Jones, Sr. to become the world’s longest course, measuring 8,325 yards from “The Tiger” tees (this, of course, before the birth of Mr. Woods); at least the par from there is 77.  (Australia has gone the International and even Jade Dragon one step better; a series of holes is being constructed across the Nullarbor Plain, a treeless desert stretching from the town of Kalgoorlie in West Australia to Ceduna in the south.  The 18-hole track – which is taking shape to spur tourism in this rather inhospitable and infrequently visited region – will stretch some 750 miles.)

Jade Dragon Snow Mountain Golf Club is located north of the city of Lijiang, in the northwestern corner of the Yunnan province.  It takes its name from an immense glacier – 22 miles long and 13 miles wide – that a long ago observer looking north from Lijiang decided resembled a green dragon reclining in the clouds.  The course rests near the base of the glacier – which is to say at a height of 10,000 feet.

Given its location, its altitude and its length, the act of playing a round at Jade Dragon Snow Mountain Golf Club has the aura of embarking on an expedition – as soon as you leave your hotel.

The first hole is a par-5, 681 yards from the back – a diminutive 606 yards from the blues.  There are a few forced carries over lakes, and you have to be careful to land your first carry short of the second lake – something of a mathematical feat, considering that you’re not completely adjusted to the added distance you get from the 10,000 foot elevation.

It was an overcast day when my friend Jeff played Jade Dragon Snow Mountain, and a certain lack of oxygen and the need for many layers of clothing made the altitude apparent. (“You felt at times like you were under water,” Jeff added.  “I’m fairly certain there were attendants with oxygen tanks riding around the course.”)  But the drama of the setting really hit home when the clouds began to lift.

The course ends with a 695-yard par-5, and then the fireplace beckons.  “If you have the energy left to tee the ball up on the 18th, you’re winning,” Jeff quipped. ]]But there are rewards waiting in the clubhouse after your epic day.  They have a Japanese-style soaking tub and a restaurant that serves terrific food.  But best of all, you have a real sense of accomplishment, like you’ve swum the English Channel or climbed a mountain (which you kind of have).  Given the grandeur of the setting and the altitude and the course’s absurd length, it’s safe to assume that no one will ever build such a course again.  And you’ve conquered it.

Getting There:  Jade Dragon Snow Mountain Golf Club (+86 888 513 1888) is near the city of Lijiang, which can be reached via domestic flights from Kunming, Shanghai and Beijing.  Several domestic airlines serve the city, including Air China (800-882-8122; www.airchina.com) and China Eastern Airlines  (www.ce-air.com).

(From Fifty More Places To Play Golf Before You Die.)