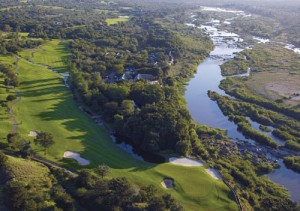 “There are MANY great golf courses around the world,” Gary Player declared.  “When you try to think of a course that’s a must-play, you look for something COMPLETELY different.  Most people will agree that Leopard Creek gives visitors something very different, something most golfers have never experienced before.”

That something is the chance to interact—at times, quite closely—with the wild animals of the bushveld—while experiencing a course that’s ranked as one of South Africa’s finest.

Leopard Creek Country Club rests on the banks of the Crocodile River and borders the southern boundary of Kruger National Park, in the Mpumalanga Province near the northeastern corner of South Africa.  Rocky hills (“koppies” in the local parlance) envelop the course, providing a stark contrast to the emerald green of the fairways.  The club was created by tobacco magnate Johann Rupert, who recruited Gary Player to design the centerpiece golf course; the course opened in 1996.  No expenses were spared in the construction of the track, which was built with the stated goal of creating a South African equivalent of Augusta National.  Leopard Creek is extremely exclusive, with membership by invitation only; current members include Gary, Jack Nicklaus, and Ernie Els, among others.  While membership is only in the realm of dreams for most of us, guests at the Malelane Sun Hotel (which is on the property) may apply for the opportunity to play on weekdays at a price that’s fairly modest for those bearing American dollars.

The Leopard Creek development takes pride in the gentle cohabitation of the golf course and homes with the bush country and its residents.  “We’ll get up for breakfast some mornings, and see 30 elephants grazing 15 meters from our dining room window,” Gary said.  “You can see and hear hippos with their babies in the streams around the property.  Sometimes you’ll even come across giraffe on the grounds.”  Giraffe are among Leopard Creek’s more amiable visitors.  Members warn guests to show discretion in pursuing wayward shots into the rough, as the region is home to four species of poisonous and extremely dangerous snakes—black mambas, Egyptian cobras, black-necked spitting cobras and African puff adders.  You’ll also want to be prepared to drop a provisional ball should your first shot come to rest near the water, as the Crocodile River does not take its name from whimsy, and resident hippos can also be quite dangerous (they’re reputed to take more human lives than any other mammal in Africa).  “When the course was first constructed,” Gary recalled, “we had to close it for five days because some lions got in through a broken fence.  After all, the lion’s motto is ‘If you can’t beat ‘em, eat ‘em!’”

Thanks to its exclusivity, one might play an entire round at Leopard Creek without encountering any other two-legged mammals.  The amenities are equal to the course; players are offered an ice-cold towel at the turn to freshen up, and you have the option to order pate for a mid-round snack.

When asked to name a favorite hole, Gary didn’t hesitate a moment.  “The thirteenth—a par 5—is my favorite hole by far.  The Crocodile river runs all along the left side of the hole.  Across the river, there’s 22,000,000 acres of Kruger National Park.  The green hangs out over the river at a height of more than seven stories.  You might be putting out and look down and see a crocodile thrashing about with an antelope.  If you sat on the green for a few hours with a pair of binoculars and a sandwich and some Cokes, you’d see things you’d never imagined seeing.  We South Africans love our game preserves.  There’s a great thrill in seeing the animals in their natural habitat.”  Wildlife encounters aside, the hole is also a good test of golf.  The fairway is slim, and a stream must be carried with your second shot to set up properly for your approach.

The  535-yard par-5 9th hole and the 475-yard par-4 18th are two other perennial favorites of Leopard Creek regulars.  The downhill 9th plays to an island green.  The 18th also plays downhill to a peninsular green that juts into the lake on the left; the pin is often placed at the outer left portion of the green, goading players to bet it all.  The lake shared by both greens is home to a number of hippo, and the occasional croc.

No visit to the Mpumalanga Province—no matter how excellent your round at Leopard Creek—is complete without a closer look at the game reserve and its inhabitants.  For Gary, it’s part of the program.  “When I take American guests to Leopard Creek, we get up early and go out in the bubble jeep—a jeep covered with Plexiglas, so you have a complete view out—and drive through the game reserve.  We’ll see lions just five meters away, as well as leopard, elephant, and water buffalo.  We’ll come back to the big thatched roof clubhouse and have a great breakfast, and an elephant will walk by ten meters away.  After breakfast, we’ll play golf.”

An outing at Leopard Creek is indeed something different!

Gary Player is one of the legends of golf.  Since turning professional in 1953, he has garnered 163 career championships, and worldwide career earnings of over $12 million.  Gary’s major championships have included Three Masters (1961, 1974, 1978), three British Opens (1959, 1968, 1974), two PGA Championships (1962, 1972) and the US Open(1965); his Senior Major Championships have included Three Senior PGA Championships (1986,1988, 1990), two Senior US Opens (1987, 1988), three Senior British Opens (1988, 1990,1997) and the Senior Players Championship (1987).  Gary’s interests outside of playing golf include breeding thoroughbred racehorses; farming; physical fitness; The Player Foundation benefiting children’s education; and a successful business enterprise, Black Knight International, which includes Gary Player Enterprises, Gary Player Design, Gary Player Golf Academy and Gary Player Golf Equipment.  A native of South Africa, Gary has received numerous honors in his 50-year career, including induction into the World Golf Hall of Fame in 1974; South African Sportsman of the Century award; 2000PGA Tour Ambassador of Golf Award;  the 2003 Laureus Lifetime Achievement Award.  Most recently he was awarded the Order of Ikhamanga (by President Mbeki of South Africa) for excellence in golf and contribution to non-racial sport in South Africa.
If You Go…

Course Information:  Leopard Creek plays 7,316 yards from the Championship tees to a par-72.  While Leopard Creek is extremely private, guests of the Malelane Sun Hotel may be granted weekday playing privileges.  Also, a number of operators offer golf tours of South Africa, and many of these tours include Leopard Creek on their itinerary.