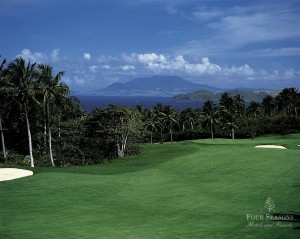 The weather is always balmy at the Four Seasons resort on the island of Nevis.

Forget the cold winds and spitting rain of Ballybunion and Bandon Dunes.  Golfers who visit the Caribbean are willing to forsake a little history and tradition for a kinder and gentler climate.  “Clients who consider the Caribbean are looking for an island golf experience,” said Matthew Diehl, marketing manager for Links Golf Travel [www.linksgolftravel.com].  “They want to play in the jungle, with views of the ocean and the mountains.  They want to play along the coast, with palm trees swaying.”

Amongst aficionados of golf course design, the Caribbean has not traditionally been viewed as a standout destination.  This, simply because the sun and surf that make the islands so appealing on so many levels is hell to pay on turf grass.  The challenges of growing and maintaining first-rate playing surfaces have historically discouraged many top-shelf designers and developers from doing adventurous work in the Caribbean.  But in the last ten years, this has changed, with the introduction of a new turf hybrid — Seashore Paspalum.  “Agronomic advances are making golf more viable on the islands,” said Brian McCallen, acclaimed golf travel writer.  “The new hybrids require less than half the pesticides of earlier grasses, are salt tolerant, and can even be irrigated with brackish water.  They’re low maintenance, they’re very playable, and their fueling a boom in new, high quality courses.”

Some of the up and comers on the Caribbean front include the Green Monkey at the Sandy Lane Resort [www.sandylane.com] in Barbados (Sandy Lane’s other 18-holer, The Country Club Course, hosted the 2006 World Golf Championships); Punta Espada, a Jack Nicklaus design at the Cap Cana Resort [www.capcana.com] in the Dominican Republic (the first of three Nicklaus Signature Courses that will be built there); and

El Camaleòn, a recent Greg Norman design at the Fairmont Mayakoba resort [www.fairmont.com/mayakoba] in Playa del Carmen, 42 miles south of Cancun on Mexico’s Yucatan Peninsula (the course recently hosted the Mayakoba Classic, the PGA’s first-ever, full-field event in Mexico).  “It used to be that Acapulco and Cabo San Lucas were the golf spots in Mexico,” said Bill Hogan, president of World Wide Golf (www.wideworldofgolf.com).  “Within the next ten years, the Mayan Peninsula will exceed those venues, thanks to the many fine new courses being built.  In addition to El Camaleòn, there’s Moon Palace (a Nicklaus design), Playa Mujeres (another Norman design) and the Hilton Cancun.  There are at least four more being built.  The resorts around Cancun provide excellent quality and great value.”

Of the old guard Caribbean golf resorts, one stands out for everyone:  Casa de Campo [www.casadecampo.com.do] in the Dominican Republic, and Teeth of the Dog, one of Pete Dye’s first breakthrough designs, and one that’s considered among his greatest.

The “teeth” of Teeth of the Dog refer to a local nickname for the island’s jagged-edged coral reefs, which are often in view along the track’s famed sea-side holes – particularly the fifth through the eighth.  Of those holes, Dye has said “I had to manufacture the seventh, but the others were all right there.  You usually don’t find such things along the edge of the ocean. It was like the Man upstairs had laid out those holes.”  “I love to send clients to Casa de Campo,” Matt Diehl continued.  “All three courses – Dye Fore, The Link and Teeth of the Dog offer a very different experience, and they’re all fantastic.”

Among its many charms, Teeth of the Dog includes two of golf’s great ocean side par 3’s:  the 157-yard fifth and the 224-yard 7th.  When the wind is coming off the water, it takes nerve to start your shot over the Caribbean – and faith that the breeze will bring it back to the peninsular greens.  Dominicans, who collect balls from the shallows along holes five to eight, find many willing takers among players heading for the back nine.

The Punta Espada golf course is one of three Jack Nicklaus Signature Golf Courses that will be built at Cap Cana.  “Nicklaus was given a lot of valuable real estate to work with at Cap Cana,” said Brian McCallen, “and he made the most of it.”  Indeed, 15 of Punta Espada’s holes overlook the Caribbean, and eight wind along the coastline.  The 249-yard par-3 requires a long carry over the sea, though there’s plenty of space for the weak of heart to bail out short and left of the green.

The first hole at Temenos sets the stage – the 390-yard par-4 slopes downhill to a green that’s framed by the Caribbean and the rocky terrain of nearby St. Maarten.  Temenos has lots of up and down, and lots of water hazards.  “I’m impressed with Greg’s work,” said Brian McCallen.  “It’s not just another guy copying Pete Dye.”  If you tire of golf, one of the course’s saltwater ponds is stocked with bonefish – another Caribbean distraction!

“Don’t let the monkey bunker distract you,” warned Bill Hogan.  “This is a first-rate course.”  The Green Monkey is  a Tom Fazio creation, hewn from a defunct quarry with considerable elevation changes and constant views of the Caribbean.  (The monkey comes from the Bajan Green Monkeys common here.)  “With the two courses at Sandy Lane, Royal Westmoreland and Barbados Golf Club,” Hogan added, “Barbados has four excellent golf courses that would satisfy any American country clubber.”

At Mayakoba, Greg Norman worked with a team of environmentalists to apply a Mayan forestry management philosophy called socoleo, to preserve as much of the mangrove forest as possible.  The results is a track that weaves elegantly through a dense jungle environment, and includes unexpected obstacles – most notably, a cenote (underground cavern) on the first fairway, some 300 yards from the tee.

Puerto Rico boasts 23 courses (with six more on the way) The Westin Rio Mar offers two excellent tracks.  “The Norman design (River Course) goes through rugged jungle terrain along the Mameyes River,” Matt Diehl said, “and the Tom and George Fazio layout (Ocean Course) is along the coast.  You get two very different experiences, both quite good.”  The 16th at the Ocean Course, a long par-3 along the water, stays with players long after they’ve left the island.

In the shadow of the spires of the Atlantis Casino, the Ocean Club at Paradise Island (near Nassau) has gained notoriety for hosting the Michael Jordan Celebrity Invitational Tournament each January.  Designed by Tom Weiskopf, the Ocean Club is a perfect resort course – that is, challenging from the back tees for better players, not overly punishing for once-a-month players.  The par-4 fourth hole is especially memorable with its water-surrounded green.

Caye Chapel is the name of the island a short flight off the Belizean mainland that the golf course graces; in fact, most of this smallish caye is given over to the track, which moves north and south between saltwater ponds inhabited by tarpon and saltwater crocodiles.  (Be VERY careful about retrieving errant shots!)  The par-5 16th stretches 623 yards along the west side of the island, offering distant views of Ambergris Caye and the mainland.

The island of Nevis sees fewer visitors than other Caribbean escapes, and that means open fairways at the Robert Trent Jones, II-designed course at the Four Seasons Resort.  “This golf course is not oversubscribed,” observed Brian McCallen.  “You don’t need to make a tee time, and it’s very relaxed.  And that adds to the sense of luxury of the place.  The track works its way up the side of a volcano, with monkeys in the trees and great views of nearby St. Kitts.”

Montego Bay has catered to traveling linksters for many years with a number of golf resorts.  For Matt Diehl, Cinnamon Hill Ocean Course (designed by Robert Von Hagge) at Rose Hall Resort stands out.  “It’s really a teaser course,” Diehl said.  “The front nine is a great warm-up; it’s very open and inviting.  The back nine gets more difficult, with more traps and dense foliage coming into play.  Overall, it’s a really fun place to play.”  Tryall Club [www.tryallclub.com] is another Jamaica favorite.