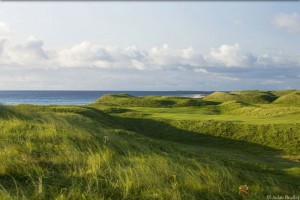 Golf writers love the thrill of discovering a new destination for their readers, a heretofore hidden gem.  Back in 1990, John Garrity experienced that thrill of discovery in a very profound way, uncovering an 1891 Old Tom Morris design on the isolated Scottish island of South Uist.  The course -Askernish – had not simply eluded American visitors.  It had literally been  lost to the ages!

“I was on my first overseas golf assignment for Sports Illustrated,” John recalled, “to do a piece on the Royal & Ancient.  To make trips abroad cost-effective, the magazine would assign writers several pieces germane to the region we were visiting.  In addition to the St. Andrews essay, they asked me to explore an Old Tom Morris course that was supposed to exist out in the Hebrides.  The thinking was it would be very close to a time machine, and would illustrate what a genuine Scottish links course would have been like in the 1890s.  It was a long voyage out to the island of South Uist, and when my wife and I finally reached the course in question, it was very evident that Tom Morris had not been remotely involved.  It was a meadow with dead crows hanging from a surrounding fence.  I saw something that looked like a tee, teed up a ball and hit out toward Newfoundland.   I eventually found the ball and walked forward to see if there was anything that looked like a green.  I found a green site, threw my hat down to mark the spot and returned to try to find my ball.   It couldn’t be found, so I dropped another and hit.

“As we were playing, a truck arrived carrying two guys with a lawn mower and a flag.  They started mowing grass behind us.  A little while later, the ninth hole appeared.  We soon learned that this little nine-holer disappeared each winter, and that  the greenskeeper was a chef at a local hotel.  Old Tom Morris or not, we spent several days there and had a pleasant time.  The course had a little hand-drawn scorecard with a map of the course.  It showed two tees for each of the nine holes, but I could never find the alternate ninth tee.  I was determined to find it, and wondered if it could it be up on a dune in a corner of the meadow.  We walked up, and that’s where it was. It held no interest for me however, when I saw what was south of it – a stretch of land that looked like Ballybunion, only more severe.  This was the only point on the nine hole course where you could see this land-the land, I was certain, where Tom Morris had built his course.

“As it was only May the grass hadn’t grown very high, and I decided to play it.  From the tee, I could see what appeared to be a fairway, the sea to the right, mountains to the left.  I hit a two iron, and then pitched up to a natural green site.  I gave myself two putts, then scrambled up to the top of the next dune, where I could make out another hole.  It was just me, Sports Illustrated photographer Lane Stewart, a dead sheep and lots of rabbits – or at least, lots of rabbit holes. I continued for six or eight holes, playing golf very much the way the ancient players did. In the early days, you found your own “course,” following the contours of the land as you saw fit.  I called this course  ‘Askernish Old’ in my story, and I called the nine-holer ‘Askernish New.’  The story always had a special place in my heart, one of my first big assignments as a golf writer.  But I never heard anything back from Scotland; Askernish Old seemed to have gone lost again in my absence.   I, however, never forgot about the course.  It was always in my mind that I’d get back there, though it never happened.”

John indeed had rediscovered a lost Old Tom Morris design.  A magazine account by Morris’s friend and frequent companion, Horace Hutchinson, made mention of Morris’s trip to South Uist, and the layout of eighteen holes on “the rolling dunes of Askernish Farm.”  For a few decades, the course was played regularly by visitors and more affluent locals; it was maintained by farmers using scythes.  When the land fell back into agricultural use in the 20s (under the complexities of Scottish crofting law), the course beganreverting to its pre-golf state.  It was consigned further to oblivion when a local hotelier commissioned a 12-hole course to be built on the flatter land adjacent, in large part because it could be easily maintained with grass-cutting equipment that was used to keep the local airstrip (also nearby) in shape.

John’s story picks up some 17 years later.  “I was sitting in the press room at the U.S. Open in Oakmont (in 2007), checking email,” John continued. “There was one from the office saying that someone was trying to reach me from Askernish, Scotland – a Ralph Thompson.  I had a good idea of why he had called.  I’d recently done a little satirical column on the Golf.com website, listing my top 50 courses.  It was set up to look very scientific, though if you looked closely, courses were ranked upon my having had memorable experiences on them.  Poipu Bay was on the list, as I had played a pro-am with Tiger Woods and we’d won.  Number one on the list was Askernish Old – my conceit being that the course didn’t really exist-at least not anymore.  Or so I thought.

“I called Ralph Thompson from the press room and he picked up in two rings. I was ready to confess my little joke, when he explained how the folks at Askernish were beside themselves that people were already discovering them, and the course wasn’t even quite ready to open.  Ready to open?  I was shocked as he explained how someone else (a golf consultant named Gordon Irvine) had stumbled upon Askernish Old, and with the help of designer Martin Ebert, the course was being re-built.  Ralph invited me to visit and be among the first golfers to play it in its new incarnation.

“When I visited in the spring of 2008, the course wasn’t quite playable – 15 holes were open, but if you missed the fairway, you were lost.  There were more rabbit burrows -deeper then I remembered – but the old Tom Morris greens had reappeared.  The new holes that Ebert had built were pretty good- but the course really begins on the seventh, where you look out on this otherworldly dunes landscape with fairways snaking through it.  We got to play two days – me and a group of potential investors – and on the second day I made history.or so I thought.  We were playing the par-4 15th hole, called Old Tom’s Pulpit.  It has a bizarre green – the front juts out like a pulpit, with a punchbowl behind the pulpit.  I hit a gap wedge or nine-iron in, and when I got up there, people on the green said, ‘You’re in the hole! ‘I was very excited – I thought I’d notched the first eagle on the reinvigorated Askernish Old.  Then they broke my heart:  My ball was in a rabbit hole, not the flagstick hole.”

It’s unknown at this time if the first eagle has been notched at Old Tom’s Pulpit.  But if by any strange circumstance Askernish Old should go missing again, John Garrity has generously volunteered to help club members locate the lost links.

John Garrity is a Senior Writer for Sports Illustrated, where he’s worked since 1979.  At SI, he has covered many sports, but his beat has been golf since 1989.  A Golf Writers Association of America multiple award-winner, John is also a regular contributor to Golf Magazine and Travel & Leisure Golf, among other publications. He’s authored over a dozen books, including Tiger 2.0 and his most recent title, Ancestral Links.

Getting There:  Askernish Golf Club is on the island of South Uist in the Outer Hebrides islands off the northwest coast of Scotland.  Flights are available from Glasgow to Benbecula (on North Uist island) on British Airways (800-247-9297 ; www.ba.com).  You can also take a ferry from the mainland to The Uists on CalMac (+44 8000 66 5000www.calmac.co.uk).