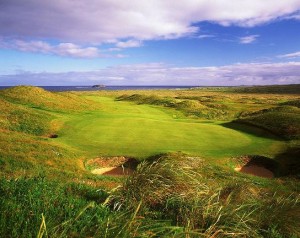 The 13th on the Glashedy Links at Ballyliffin is an epic journey of 572 yards through the dunes of northernmost Ireland.

There are many “best-kept secrets” among the cabalistic corps of golf travel enthusiasts.  But if you were to canvass a random roomful of golf writers from the British Isles, odds are pretty good that one of the “secrets” they’d share would be Ballyliffin.

“In 1991, I was working on a guide to courses in Great Britain and Ireland that I’d done for several years running,” Nick Edmund said, recalling his introduction to Ballyliffin.  “I asked a golf photographer friend, Matthew Harris, if he had a favorite course.  He said ‘Ballyliffin.’  I thought he meant Ballybunion, and I asked him if he was sure about the name.  He replied ‘Yes.  You must go and see it.’  Two months later I visited.  I absolutely fell in love with it.  It was everything you could hope for in a links course—extraordinary rippling fairways, ocean vistas.  It was completely unadulterated, as if it had been there for 300 years, and the people there were so incredibly friendly.  I thought I’d seen every important links course in Ireland, but here was Ballyliffin.  The only thing preventing it, in my opinion, from being heralded as a truly great course was the layout’s rather modest bunkering.  Still, this didn’t detract from the experience.”

Ballyliffin is the most northerly golf course in Ireland, situated in the tranquil, tiny resort town of Ballyliffin on the Inishowen Peninsula.  “To reach Ballyliffin, you travel quite a way through peaceful countryside,” Nick described.  “You don’t see much more than a few sheep.  Then you come over a hill, and there’s the links land and the sea.  The hills you travel over provide a striking backdrop during your game.”

The original nine-hole course at Ballyliffin was established in 1948, designed and constructed by local enthusiasts.  In 1973, a new 18-hole course—called the Old Course, by the way—was opened, on a 400-acre site near the original links.  The design for this track had contributions from architects Eddie Hackett, Charlie Lawrie and Harry Pennick, as well as Martin Hampton, an agricultural advisor in the region.  Their piecemeal collaboration created a course that seems to have been routed by forces of nature.  The highlights are plentiful on the Old Course.  The par-3s are all memorable, particularly the 162-yard 5th hole, where your tee shot is played to a stage-like green that’s flanked by sand hills left and right.  One of Nick’s favorite holes is the left-to-right turning 488-yard par-5 4th.  “You start from an elevated tee, and from here you can view much of the course, the Atlantic and Glashedy Rock, Ballyliffin’s own Ailsa Craig.  It’s got that classic rippling fairway, and you can see the entire hole unfold before you.   Though there can be a tricky crosswind, the green is reachable in two.  It rests on a natural plateau, and there are no greenside bunkers – but then none are necessary.  It’s a great feeling if you get up in two, but it’s by no means an easy five.”

Nick was passionate about Ballyliffin, and took it upon himself to spread the good word.  “In 1993, I was introduced to Nick Faldo’s manager in connection with a book I was doing about courses in Ireland.  I asked him which Irish courses Nick had seen.  Had he been to Ballybunion?  His manager said, ‘No, but it’s on the top of the list.’  I mentioned some other courses, among them Ballyliffin. He then said, ‘Why not put an itinerary together?’  I thought he was just being polite, but I put it together and sent it along all the same.  Come June, Nick Faldo and his entourage were hovering over Ballyliffin in a helicopter.  Later that day, Nick said that the Old Course was the most natural links course he’d ever played.  As you might imagine, coming from Nick, this really put Ballyliffin on the map.”

In 1992, the Ballyliffin Club began contemplating the addition of a second 18 on their site.  Pat Ruddy and Tom Craddock were brought in to review the opportunity and reported to the club that the land “was probably the finest piece of links golfing terrain that they had ever seen.”  By 1995, the Glashedy Links—named for the rocky island a mile off the coast—opened to critical acclaim.  Where the Old Course is charming beyond compare, bumping and rolling in every conceivable direction, Glashedy is just plain formidable.  “A mighty course,” Nick declared, “built on a grand scale!”  Long at over 7,200 yards, with narrow fairways and an abundance of revetted (turf stacked) bunkers, players having an off day will find little mercy here.  Yet Glashedy serves up the same spectacular views as its somewhat friendlier neighbor.  From the elevated tee on the183-yard par-3 7th, 100 feet above the green, much of the course is visible.  The 572-yard par-5 13th is an epic ramble through a valley of sand dunes.  An elevated green awaits at the end of trail, postponing any hope of rolling a clumsily struck iron shot onto the putting surface.

With the same inevitability of the tides that ebb and flo around Glashedy Rock, Nick Edmund and his new acquaintance Nick Faldo were pulled toward Ballyliffin.  “By the time Glashedy opened, I was running my own golf marketing company and Ballyliffin Golf Club was a client. I attempted to involve Nick Faldo in a commercial relationship with the club.  There were favorable talks, but it didn’t quite happen. However, I got to know Nick and his associates better and, a few years later, I ended up going to work for Faldo Design.  The years passed until 2004.  Through all this time I’d never forgotten about Ballyliffin, and I still wanted to somehow involve Nick Faldo with the Old Course.

“On a 2004 visit to Ballyliffin, it suddenly occurred to me how I could get Nick involved – he could completely revise the bunkering on the Old Course!  I contacted the club, who I still had very good relations with, and made my pitch:  Nick has a very strong affection for the course, he appreciates its strengths as well as its weaknesses; what do you think about him renovating the bunkers?  Thankfully, they said ‘Yes!’  Thus far, the front nine has been completed, and the back should be done by the spring of 2006.  It’s been a small dream come true to make this happen, squaring the circle, as it were.  When these strategically placed little pot bunkers are all added, it will be one of the best courses, unquestionably, in the British Isles.”
Nick Edmund has observed that the 19th hole and the Bar are synonymous: a place of relaxation and where the winnings from a weekend foursome can be put to good use. For Nick, the Bar and the 19th hole have been his two careers. After qualifying as a Barrister in 1984 he began to practice at the English Criminal Bar. Golf, however, has been a major distraction all his life. In 1987 he was invited to produce a ‘where to play, where to stay’ guide to golf in Britain; the successful Following the Fairways resulted and 13 editions of this book have been published. Nick is a regular contributor to the leading American golf magazine, LINKS, and among his other published works are the award-winning Visions in Golf, the Strokesaver Guide to the Classic Courses of Great Britain &Ireland, and nine golf year books. Since 1998 Nick has been responsible for developing Nick Faldo’s golf course design business, Faldo Design. He is married to Teresa and they and their two sons, George and Max, live in London.

Getting There:  Ballyliffin is Ireland’s most northerly Golf Club, 10 miles due south of Malin Head, Ireland’s northernmost point.  The closest international airport is in Belfast, Northern Ireland; from here, it’s two hours to Ballyliffin.  Direct flights to Belfast are available from Newark, NJ on Continental (800-231-0856; www.continental.com).  The town of Derry is just 25 miles from Ballyliffin, and the airport here is served by British Airways (800-AIRWAYS;www.britishair.com) from London and Glasgow, Scotland.  Ballyliffin is roughly a 4-hour drive from Dublin.

Accommodations:  Ballyliffin is a resort town, though pleasantly devoid of the tacky trappings Americans might associate with the phrase.  A variety of accommodations are available, ranging from hotels to self-catering (rental) houses.  A number of options are listed at www.ballyliffingolfclub.com.   Nick Edmunds recommends the newly opened Ballyliffin Lodge & Spa (+353 7493 78200; www.ballyliffinlodge.com).