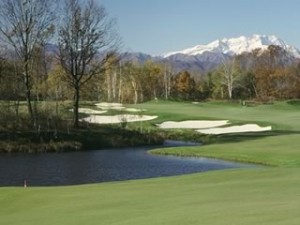 The Del Conte Course at Bogogno offers frequent vistas of the nearby Monte Rosa massif.

The lake region of northern Italy conjures up many pleasing images for sophisticates seeking a respite from the demands of modern-day life:  three hundred year-old villas along sparkling Lake Como, perhaps populated by handsome celebrities like George Clooney (who does keep a home on the lake in Carate Urio); charming bistros, serving up rich risottos and lively Barbarescos, pressed from Piedmontese Nebbiola grapes; and the twinkling Pennine Alps to the north along the border with Switzerland, perennially frosted with snow.

An inviting getaway indeed, made even more promising by the presence of fine golf courses like Bogogno.

“I was addressing a conference in Monte Carlo, and was approached by a charming Italian named Renato Veronesi,” Robert von Hagge recalled.  “He was planning to develop some land northwest of Milan into a residential country club, with two courses – much like what we see in the United States, but a very radical concept for Italy.  He had a long list of golf course architects who he had considered for the project, but the short list was Jack Nicklaus and me.  He invited me to come and visit the property, and soon after I made the trip.  I’d say that it was a seven on a scale of one to ten – rolling farmland and timber, with views of the Alps to the north.  It had everything it needed to be something special.  Acquiring the land had been quite a feat.  Renato had patched together 40 pieces of property from nearly that many landowners – some had been in their respective families since the 12 and 13th century.  We drew up some routing plans contingent on acquiring these parcels – all but one was eventually purchased, and we won the assignment.”

Robert and his then assistant, now partner, Rick Baril, created two dramatically different layouts at Bogogno.  The Del Conte 18 has an inland links flavor, wandering over flattish terrain with the peaks of the Monte Rosa mountain chain framing many of the holes.  The Bonora 18 is a more traditional parkland layout, climbing through hillier parts of the property.   “Del Conte is a little more challenging than Bonora,” Robert continued.  “Bonora has wider fairways and more expansive openings to the greens.  Our idea here was to create a lovely walk, even if you didn’t have a golf club in hand.   To that end, we created several streams that circulate through the woods, as the sound of water gurgling through the forest is quite pleasing.  On both courses, we strove to bring the long views of the Alps into focus as much as possible.  Great backgrounds can make shots unforgettable.  Del Conte is on higher ground, so whether you turn left or right, you’re looking at mountains.”  This is no surprise, considering that some of the peaks of the Monte Rosa massif reach over 14,000 feet – including Dufourspitze (Punta Dufour in Italian), the tallest mountain in Switzerland.

The romantic or epicurean in you may wish to linger in the bistros of the neighboring hamlets — Bogogno and Cressa, among others – to feast on the region’s unique cheeses and decadent white truffles (some valued at over $1,500 a pound).  “We had some of the most marvelous meals of my life in those towns,” Robert recalled, “and stayed in some charming bed and breakfasts.  One of our favorite little hotels – San Rocco — was in a town on Lago d’Orta called Orta San Giulio.  San Rocco is in a former monastery, and it’s just across the water from Isola di San Guilio, which houses a basilica of the same name, parts of which date back to the tenth century.”  You’ll do well not to become too sated or too relaxed – there’s more golf to be had.  Palaza Arzaga, near Verona, has an 18 hole layout (by Jack Nicklaus, Jr.) and a 9-holer (by Gary Player) on the banks of Lake Garda.  Golf Club des Iles Borromees, between the cosmopolitan city of Milan and Lake Maggiore, offers up brilliant vistas of both the Ticino Alps and the Milan skyline.  Closer by, in Agrate Conturbia, is the Golf Club Castelconturbia, with three sets of nine laid out by Robert Trent Jones, Sr.  The weather in the region is clement enough to permit year-round play, and it’s quite conceivable to ski and golf on alternate days in the winter season.  Golfing gourmands may find the best of both worlds with a Piedmont cooking school/golf extravaganza that’s been assembled by Wide World of Golf.

The opportunity to spend time with the people of the Piedmont is one of the great pleasures of any visit to northern Italy.  Robert had many chances for interaction, and some of the most interesting were on the golf course itself—before it was done.   “In our design methodology, we don’t get too granular with our board specs,” Robert explained.  “We make most of our refinements on the ground, and spend a lot of time with the on-site construction crew.  It’s the best way to communicate with the shapers, and to catalog what the player’s going to experience, shot by shot.  When we started building the course, many of the farmers and other people who Renato had purchased land from followed us about, taking note of everything we did.  After all, we were changing the complexion of the property that had been intertwined with their lives for generations, and they wanted to see if we’d be making improvements.  Sometimes there would be as many 30 people following us.  I speak no Italian and they spoke no English, so they got an interpreter.  As we’d talk through a step in the construction process, the group would sometimes utter a collective “Oh!”  Other times they’d clap.  I’d share the sketches we’d made of given holes, and make copies afterward so they had something they could take home to help explain what was happening.

“When I visit Borgogno, I still sometimes see the same farmers who followed me around the course walking the country roads around the property.”

Robert von Hagge was literally born and raised on a golf course.  Before his 17th birthday, he had worked as a caddy, shop boy (cleaning and repairing golf clubs), caddy master, golf course maintenance crewman, assistant greens superintendent, assistant golf professional, and as a commercial illustrator for sporting magazines.  In 1955, Dick Wilson, one of America’s foremost golf course architects, employed him as an apprentice golf course designer. By 1959, Robert was being recognized within the profession as a principal designer with the Wilson firm. By the end of 1962, he had been involved in all or part of the design of 40 golf courses in the U.S. and abroad; later that same year, he resigned his affiliation with the Dick Wilson Company in order to start his own firm.  To date, Robert has created some of the world’s most outstanding and award-winning courses, and has been responsible for the design, redesign or partial design of over 250 golf courses in the U.S., Caribbean, and 16 foreign countries.  He is a principal with the design firm of von Hagge, Smelek and Baril.