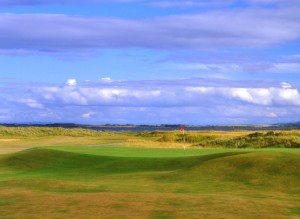 Many visitors to Scotland – whether they have 3 days or 3 weeks – try to squeeze in as many courses as possible, moving from town to town and coast to coast to squeeze centuries of golf into a matter of hours.  In the summer of 2000, Lorne Rubenstein took 3 months to focus on one town and one course (more or less).

“Back in 1977, I traveled from Canada to Great Britain to play in the British Amateur tournament in England,” Lorne began.  “In preparation for the competition, I went to Dornoch, up in the Scottish highlands.  I’d read Herbert Warren Wind’s article in the New Yorker magazine about the course.  Wind stated:  ‘It is the most natural course in the world. No golfer has completed his education until he has played and studied Royal Dornoch.’  I was only intending to go up for a day or two, but I liked it so much, I stayed for a week.  The place really imprinted itself on my brain.  I started writing about the game soon after, and though I visited Scotland frequently to cover tournaments over the years, I had not been back to Dornoch…though the thought of going back always loomed in the back of my mind.   In 2000, I decided to take a break from the tour to spend a summer there.  It wasn’t solely for the golf; I wanted to spend some time in a beautiful, quiet village in a remote place in Scotland.  My wife is a college English teacher, so she was able to come along, as she didn’t have classes in the summer.”

Dornoch is roughly 30 miles north of Inverness, which some wags call Scotland’s northernmost bastion of civilization.  To put things in perspective, thirty miles north of Inverness places Dornoch at the same latitude as Hudson Bay and Juneau, Alaska; as such, many golf pilgrims never quite make it here.  Written records show that golf has been played in Dornoch since at least 1616; only St. Andrews and Leith show records of earlier play.  “People equate Scottish golf with the town of St. Andrews,” Lorne has observed, “but if you take the golf away, St. Andrews is still a charming university town with great historical significance.  If you take the links away from Dornoch, it would be largely forgotten.  If any town in the world deserves to be described as the village of golf, it’s Dornoch.”

The course that members and guests play today took began to take shape in 1886 when Old Tom Morris was recruited from St. Andrews to add nine holes to the existing nine.  Three years later another nine holes were added, and Dornoch was on its way to immortality.  Donald Ross was a native of Dornoch, and played the course before and after Morris’s additions.  He was known to have spent long hours walking the course, and as greenskeeper here from 1895 to 1899, he made refinements to the design; the links here certainly informed his design work in America.

“Finding a place to live in town was difficult,” Lorne continued, “as there just aren’t many rentals available.  Eventually I found a seedy flat above the only bookstore in town.  A college student would have found the flat seedy, but it had a view of an ancient cathedral, and I’m as much a bookstore aficionado as I am a fan of golf.  Dornoch is one of the most arresting places I’ve visited, snugged between the sea and the mountains.  There’s a lovely path above the golf course that you can walk.  I also did a lot of cycling on the country roads.  The chance to take in the larger landscape and get to know the people was just as important to me as gaining an understanding of the course.”  Some visitors to Scotland will comment on the reserve and reticence of the populous.  For Lorne, time and familiarity melted away much of this reserve.  “Dornochers are skeptical by nature of people who would like to bring their outside ways to the village, but they soon warm to you. You have to prove yourself, to show that you have come to Dornoch because you want to experience their way of life, not to transport yours there.”

There are so many fine moments at Dornoch.  The tee shot on the 161-yard par-3 sixth (Whinny Brae), where any shot vaguely to the right slowly falls away into oblivion.  The tee shot on the dogleg par-4 14th (Foxy), where a well-struck draw places you in the best position to approach the green.  One of Lorne’s favorite moments comes on the third hole.  “When you come around the corner from the second green, you head through some hedges, and then the entire courses spreads itself out, all there for your viewing.  It’s golf on open ground with an ocean-view.  I knew it from my first visit in 1977, but it’s still powerful to me.

“Many days I would play first thing in the morning with half a bag of clubs, and be done by nine; you don’t need all 14 clubs out there, as you can play so many inventive shots on the ground.  The rest of the day, I’d go for walks or bike rides or spend a few hours in the bookstore.  Sometimes in the afternoon I might go to the pub on the second floor of the golf club and watch players coming in while sipping a club ale or single malt.  They even have wireless now in the pub!  I might go back out on the course around nine in the evening.  My wife doesn’t play golf, but she’d often accompany me.  I wouldn’t necessarily play 18 holes – I might play five or six, or just stop every now and then and hit a shot.  Other times, I’d take a book and sit on a bench that’s near the sixteenth green.  Some evenings we’d walk out to the farthest reaches of the course, near the ninth tee.  Out there, you feel like you’re on the edge of the world.  The little 13th became a favorite during my summer.  I recall one night when the wind was blowing hard across the green from the sea, and I hit a variety of shots with different clubs—holding shots against the wind, riding the wind, hard hooks on the wind. I could have stayed there all evening, because there were so many ways to play the hole.”

If you make it as far north as Royal Dornoch, you owe it to yourself to visit some of the Highlands’ smaller golfing pleasures.  These include Brora, which has a full-time greenskeeping force of sheep and cattle; Tain, which features an Alps hole (which the locals call the Dolly Parton hole, as the second shot must be played blind over two large mounds); and Golspie, a little links course whose players have battled erosion along the course’s shore holes by building massive stone piles.  If Lorne were to play 100 rounds of golf in the Highlands, 70 would be at Dornoch.  “Everyone has a spiritual home,” Lorne concluded.  “Dornoch is mine.”

Lorne Rubenstein has written a golf column for The Globe and Mail, Canada’s national newspaper, since 1980. He’s written eight books, including A Season in Dornoch, Links: An Insider’s Tour Through the World of Golf, and books with the late Canadian golfer and master ball-striker George Knudson, Nick Price, and David Leadbetter. Lorne hosts Acura World of Golf, Canada’s longest-running golf show on television; it’s on The Sports Network. He writes a regular column for ScoreGolf, a national publication in Canada, and has written for magazines around the world, including Golf Digest, Golf Magazine, Golf Journal, Links, Esquire, T&L Golf, and Cigar Aficionado.  He is a past winner of Golf Writer’s Association of America award for the best feature article.