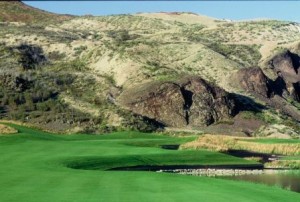 Life is hard in a mining town, and it only gets harder when the mine closes down.  This was the fate that faced Anaconda, Montana (population 7,000) in the early 1980s.  The Washoe Smelter, which produced nearly one sixth of the world’s copper, dimmed its fires forever, eliminating 1,100 jobs (and over 60% of Deer Lodge County’s tax base) overnight.  To make matters even worse, Anaconda was left with the detritus of nearly 100 years of smelting operations.  The region of town that had housed the smelters was so environmentally degraded by arsenic and other by-products of the smelting process that it was listed as one of the largest EPA Superfund sites in the country.  The Atlantic Richfield Company (ARCO), who had purchased the land from Anaconda six years before its Superfund designation, was faced with the task of removing tons of waste material from the property or taking remedial action.  After meetings with the Environmental Protection Agency and the Anaconda community, ARCO determined that remedial action – in the form of a golf course – would be more cost-effective, and offer better land reuse opportunities.

Thus began a group of professionals quest, including John Olenoski, to transform a toxic dump into a golf destination.

“I was working in the Florida office of Jack Nicklaus Design in 1994,” as a Design Coordinator,” John recalled. “A very dear friend of mine, Bruce Borland, was the lead Designer on the Old Works project but due to his busy schedule, Jack offered me the Old Works project out in Montana and promoted me to a Design Associate.  Word went around the office about what kind of site it was.  My associates were joking around, telling me I was going to come back like one of those fish with three eyes from the Simpson’s television show.  At the time I thought, ‘Jeez, will my next project be at Chernobyl?’  But when we flew out to Anaconda for the ground breaking ceremonies I saw that the site had many great features for a golf course – nice  topography, a beautiful stream running through the site, and lots of interesting features from the smelting days. Plus, there’s the backdrop of the surrounding Pintler Mountains. The people I met that day thought I was crazy being so excited about a site that most considered the town dump.

“There’s no question that there were some doubters around town, and this became apparent right at the outset of construction. We at first, had to do retention dams to keep runoff from coming off the hillsides onto the site. We hydromulched the faces of the dams, to prevent them from eroding.  The hydromulch has a greenish blue tint that’s very brilliant when it first goes on, but fades pretty quickly.  When the tint faded, people up in town were saying, ‘Told you you couldn’t get anything to grow down there!’  This went around the town like wildfire.”

Environmentally sound or ‘green’ golf course design has gained momentum in the last few decades, thanks to increased ecological awareness.  To conserve water and limit fertilizer use, new turf grasses like Seashore Paspalum have been developed; this grass can be irrigated with salty water.   Many designs now incorporate drainage systems that catch storm water so it can be recycled throughout the course.  Course designers are also paying closer attention to native plant species.  By preserving or incorporating vegetation indigenous to the region where a course is being built, designers create a more natural setting.  This can protect and even stimulate wildlife species.  But restoration projects like Old Works take the green design concept to a whole new level.

In keeping with the classic design notion of working with what the site has provided, the Nicklaus team incorporated debris from the smelter’s heyday into the layout, including flues, smelting ovens and brick walls.  An engineered soil cover (or “cap”) of 18” to 23” was installed over contaminated soil; this cap, comprised of clay, as well as topsoil and vegetation, provides a safe buffer for both players and workers. To manage water infiltration, special liners were used under bunkers, tees, greens and the course’s two lakes.  Eleven independent drainage networks were installed, and 133 surface grates were installed to catch and route flows into the networks.  To reduce the potential for irrigation infiltration through the soil cap, a central computer, flow sensors, and on-site weather station were installed that assists in managing the amount of water used each day.

While some of the wonders of Old Works lurk under the fairways, many are quite visible and add to the pleasure of a round.  Most distinctive among these are the course’s black bunkers, which are made from slag, a residue of the smelting process.  “There was a mountain of slag as we drove in,” John said.  “Something like twenty million cubic tons. We thought it might work in lieu of conventional sand.  They set up a bunker filled with slag at the Deer Lodge Country Club, we took Jack over to try it. He felt it played quite well, and was excited to use it.  We sent the slag off to labs, and even to an optometrist, to test it to be sure it wasn’t harmful and met Jack’s bunker sand requirements. The lab results came back saying it is nearly an ideal bunker sand, if you can accept the color.  During Jack’s playing test of the slag, one spectator asked, ‘Will you have black and white bunkers on the course?’  Jack jokingly replied, ” No, I don’t think so, I’ve never been much good at checkers.’”

Great piles of slag and old furnace flues seem incongruous with a fine golf course, yet at Old Works, they prove intensely harmonious, seamlessly blending the land’s past and present.  The past is especially present on the front nine, where the par-5 third hole has a fairway bordered by calciners (a type of furnace), the par-3 4th hole has a backdrop dominated by an old flue, and the par-3 7th hole is played from an elevated tee comprised of slag.  “It was difficult at times to keep some of the artifacts in the layout,” John said.  “The original plan called for the entire site to be capped.  Working with the EPA, all the i’s had to be dotted, all the t’s crossed.  We had to wear steel toe boots, safety vests, and hard hats, and use decontamination trailers during construction of the course. Jack would wear the hard hat and safety vest but wanted nothing to do with the steel-toed boots, during his visits.”

Small towns, especially those that have been beaten down by adversity, show a great propensity for banding together for survival.  The day of the Old Works Course grand opening must have represented a small step toward rejuvenation, and the townspeople of Anaconda responded with the kind of enthusiasm they may not have experienced for decades.  “As Jack and our group were riding into town, there were banners at the car dealerships reading, ‘Welcome Jack!,’ John recalled. “They closed the schools, and all the kids were out on the site, hoping for autographs. Jack signed hundreds of them that day.  As for the course grand opening,I think it was one of the biggest openings we’d ever been involved with.  Some 3,000 spectators showed up to watch Jack play this unique golf course, it was like a tournament out there.

“That was seven years ago, and I’m sure that some of the enthusiasm has waned,” John continued.  “But I’d like to think that having that course built made some kind of difference to that town.  And that sense of maybe making a difference has made Old Works one of the most rewarding projects I’ve ever worked on.”

John Olenoski began his golf architecture career with celebrated designer Arthur Hills in 1985.  After five years with Arthur Hills, John joined Nicklaus Design in 1990 as a design coordinator.  In addition to Old Works, John was given the opportunity to be associated with a number of outstanding Nicklaus signature courses, such as Colleton River, Hilton Head Island, South Carolina, Eldorado in Cabo San Lucas, Mexico and Cimarron Hills, in Georgetown, Texas.  He now operates Olenoski Design, based in Austin, Texas.

Anaconda, Montana is 25 miles west of the city of Butte, and10 miles west of the junction of Interstate 15 & 90, approximately halfway between Glacier and Yellowstone National Parks.  Butte is served by by Horizon Air (800-252-7522; www.alaskaair.com) and Delta Connection/Skywest (800-221-1212; www.delta.com) via Salt Lake City and Seattle.

Old Works measures 7705 yards from the back tees, with a slope rating of 133.  The course is situated at 5,000 feet, and the altitude will help you cover the distance.  Greens fees range from $29 in the early spring and fall to $50 in the late spring and summer.  Tee times can be made at 888-229-4833.  Detailed information about the course is available at www.oldworks.org.

Old Works has put together golf packages with a number of properties in Anaconda, which are listed at www.oldworks.org/packages.html.  To learn a bit more about the region’s rich mining heritage, consider a visit to the Anaconda Visitor Center Complex.  If you’re a hunter or angler, don’t forget to bring your gear.  Anaconda is in the heart of southwestern Montana, and the sporting opportunities abound.