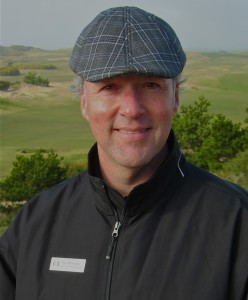 Since June of 2010, Jeff Brinegar has presided over what many consider to be America’s most sought-after “must-play” new course—Old Macdonald, the latest addition at Bandon Dunes.  Assuming the mantle at Old Mac is, in many respects, a perfect culmination of Brinegar’s golf aspirations to date.  The course that brought him here is testament to both patience and the determination necessary to help make your own opportunities.

I visited with Jeff recently on a trip down to Bandon, and had the chance to learn a bit more about his ascendancy at Old Mac – and some of the pleasant surprises he’s found at the northwest edge of Mike Keiser’s Oregon empire.

CS:  One might say that you’ve been steadily making your way to Old MacDonald for nearly ten years.  Can you describe the path that brought you here?

JB:  I took a job as a pro at the Golf Club at Hawks Prairie in Olympia, Washington in 2000.  Shortly after starting, I made a trip to Bandon Dunes.  I had played a few times in Scotland and really loved links golf, and I’d heard that Bandon was supposed to be just like Scotland.  After just one round, I knew this was where I wanted to be.  For the next four years, every time I came down, I tried to meet people on the staff to let them know that if an opportunity ever opened up, I’d be very interested.  In 2005 I got the call, and came on board as second assistant pro at Bandon Dunes.   I spent the next two years at Bandon Dunes as the first assistant, became head pro at Bandon Trails in 2008 and then head pro at Pacific Dunes in 2009.  In 2006 I told Matt Allen, who was then Director of Operations, that I really wanted the fourth course.  (Allen is now G.M. at Chambers Bay in Tacoma, WA.)  I’d had my eye on the land east of Pacific Dunes for a while, and wanted to be part of its development.  It’s been an amazing journey—from giving tours as the course was first being mapped out to being in charge of the 10-hole loop during the course’s pre-opening phase to seeing the looks on guests’ faces as they come into the shop, so eager to play.  People are giddy when they arrive.

C.S.:  To me, it would seem that being the pro at a course that’s the focus of so much attention would be like sitting in a hot seat.  Did you feel any anxiety or pressure as the clock ticked down to opening day?

J.B.:  Old Macdonald was much more exciting than frightening.  The team here has had other major openings in the past, and they know how to do it.  As long as you stay on or ahead of your schedule, you know everything is in place—the course is ready, the shop is ready and the staff is trained.  Frankly, I was more anxious about what the world would think.  On the people side of things, we do everything we can for visitors to have a positive experience.  But the proof is in the pudding.

C.S.:  From my experience – and the experience of every other person I’ve spoken to who’s played Old Mac – it’s a pretty delicious pudding.  How would you characterize the feedback you’ve been receiving in the clubhouse?

J.B.:  The most consistent thing we hear is that people say they’ve had so much fun; they want to play it again.  For those of us in the golf business, the fun factor is key.  That’s what brings people back, and what makes a course appealing to players with a broad range of abilities.  Depending on the tees you play from and the weather, you can get a different course each time you go out. Players of all skill levels are going to hit a lot of fairways and a lot of greens when they play Old Macdonald.  Though when you get on a green like the 8th, our Biarritz Hole, which is 24,000 square feet, you may still have some work cut out for you.

Once players adjust to the ground game – real links golf – it’s only a matter of time before they figure out how to attack these enormous greens and generous fairways. The strategic qualities of Old Macdonald provide for some wonderful discoveries as players get to know the course.

As I said above, regardless of your skill level we want our guests to feel comfortable.  Old Mac is the first of the four Bandon courses to offer a set of Royal Blue tees for players who might enjoy playing a course that measures out at around 4,300 yards. The response from people who’ve played the Royal Blues is, “Finally, a set of boxes that makes sense for me.” We now have Royal Blue tees on all four courses.

C.S.:  Have you received any unexpected feedback?

J.B.:  I’ve been surprised that many visitors have a decent knowledge of Charles Blair Macdonald’s legacy as a golf course architect.  We certainly did our best to explain the concept of Old Macdonald as the course was being built, but you’re never sure how much that message will resonate.  I’ve had people come into the shop afterwards and say ‘I didn’t  think a Redan Hole (#12 at Old Mac, inspired by #4 at Macdonald’s National Golf Links of America which in turn was inspired by #15 at North Berwick) could be done in such a setting, but I think Macdonald would’ve loved it.’  At the same time, I’ve really enjoyed explaining C.B. Macdonald’s contributions to people who are less familiar with his work, and how the holes that he paid tribute to at National – and that Tom Doak and Jim Urbina have reinterpreted here – have helped set the standard for golf course architecture in America.

C.S.:  I was speaking to Scott Millhouser (the head pro at Bandon Trails) the other day, and he mentioned that you and he had had a trip back east to play a little golf – including Pine Valley, Fisher’s Island and National Golf Links.  How did National compare to its offspring?

J.B.:  From the very beginning, Jim Urbina said ‘Go play National if you’re going to be part of Old Macdonald.’  I finally got the chance this fall, and it was inspiring.  At National, Macdonald based each hole roughly on a hole that impressed him during his time abroad—though it would be incorrect to think that he merely copied them.  He felt the originals had one or two good strategic elements.  He sought to rethink them to add in new strategic elements where they might improve the hole.

Tom and Jim didn’t try to replicate the holes, but they interpreted them in keeping with the landscape here.  I’d say that 15 are carved from the National template, the three others are originals inspired by the MacDonald ethos.  There are incredible moments on Old Mac – the mystery of hitting a blind approach shot on the #16 Alps Hole, the tee shot on the #3 Sahara hole, the approach shot on the#10 Bottle hole.  When you walk up the hill on #3 and finally see the whole course before you, it’s a spectacular moment.  The wide-open setting, the style of bunkers—it’s all very 1910.

J.B.:  I’m right where I want to be.  My experience at all four courses at Bandon has been out of this world.  It’s been a pleasure to work with a visionary like Mike Keiser, who’s so focused on the purity of this game.  He’s the modern-day Johnny Appleseed of links courses.  I hope he continues to plant new links around the world.