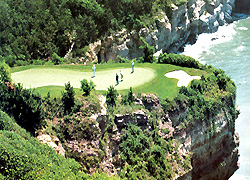 Several holes at Golden Pebble run along the cliffsides; during low tide, villagers harvest kelp and snails from the beaches.

Considering China’s new infatuation with capitalism, it’s not surprising that the number of golf courses here is increasing at an exponential rate—from zero twenty years ago to approximately two hundred in 2004 to an estimated twelve hundred by 2008.  Though the number of courses has increased dramatically along with the quality of the designs, Golden Pebble remains a highlight on the Sino golf spectrum.  It’s distinguished by its spectacular setting on dramatic cliff sides above the Yellow Sea, on land that’s essentially a national park area.  “Though the course would ultimately have some homes as part of the overall development, the owners did not want to compromise the dramatic landscape,” said Peter L.H. Thompson, the American architect who designed Golden Pebble.  “We also wanted to leave some shore access for local residents.  We set out to make the course recede back and fit into the land, and to limit the amount of earth that we moved, as there were many fossils, and many sensitive geologic formations.  The area had been the site of a village, and there were cultural and religious elements here and there—for example, two statues along the cliff’s edge, the Goddess of the Ocean and the God of the Lost Seafarer.  We were allowed to move them, but only once ceremonies were performed.  The government didn’t particularly care what was done, but we felt that it was important to respect the mores of the villagers.  Despite all the communist teachings they’ve been exposed to, the local people fall back upon the old teachings in times of duress.”

Photographer John R. Johnson was on hand for the creation of the course, and it was an experience that shed a bit of light on the way of life in a small Chinese fishing village.  “They had hundreds of people working on course, many husband and wife teams.  These people had no concept of what a golf course was.  They were shown pictures of what they were building and followed instructions.  They had some heavy equipment but were not making much use of it.  I remember the image of a backhoe sitting idle, with people working all around it, digging irrigation ditches by hand.  The husband would swing a pickax, and his wife would scoop out the dirt in between swings.”

A number of holes at Golden Pebble run along the cliffs and provide some fascinating topographical relief.  Looking ahead across the seascape, one can take in the next hole as a three-dimensional cutaway while the current hole is being played.  “This setup pulls you through the course visually as you’re physically progressing along,” Peter L.H. Thompson added.  “The tide is very pronounced at Jin Shi Tan, running two to four meters.  If you play the ocean holes at different times of day, you encounter very different scenery.  Sometimes the water is lapping against the cliff; other times, the villagers are on the beach harvesting snails.”

One of the most stunning holes at Golden Pebble is the par 3 139-yard seventh.  From the tee, a pagoda rests to the left, and another pagoda looms in the distance on a point of land, by a larger building that acts as a kelp factory.  Players hit across an abyss to a small green that juts out above the beach.  “When the wind blows, it can blow the ball right off the green,” John continued.  “This happened after my tee shot.  I went to the drop zone, hit the ball up on the green, and the wind blew it back right off the green to me.  This happened four times before I just gave up.”  During his visit, John hiked down to the kelp factory.  “They pull these small boats loaded with kelp up from the beach by a cable and lay it out in the sun to dry.  It was fascinating.”

John Johnson is President and Creative Director of Johnson Design Golf Marketing, which creates collateral and digital marketing materials for a broad cross section of the industry. He is highly sought out as a speaker for marketing, branding, Internet and image issues in the golf industry.  As a golf course photographer many of you already know John by the images he has created for public and commercial use. Besides every major golf publication, motivational posters and various coffee table books, his client and project list is like a who’s, who of the golf world. He has twice been awarded “National Golf Photographer of the Year.”

Getting There:   Golden Pebble is located approximately 30 miles from the city of Dalian, which is roughly an hour’s flight from Beijing.  Dalian has direct flights from most major Asian cities.  The resort is served by light rail, shuttle and taxi.  Jin Shi Tan is part of a national tourist zone, and is quite open to foreign visitation.  The prime visiting season is May through September.  Some visitor information (in English) is available by calling 790 0241 790 2034.

Course Information:  Golden Pebble Golf Club is a par 72 layout and plays 7,119 yards from the back tees.  Technically a private course, visitors can play by staying at one of the hotels in Dalian, or by working through a tour operator.  An interesting side note:  the developers visited several golf courses in Canada while planning their resort, including Banff Springs.  They were taken with the great log lodges they encountered there, and contracted with a Canadian company to build a lodge for Golden Pebble.  The log lodge was built, taken down, shipped to China, and put back together again.