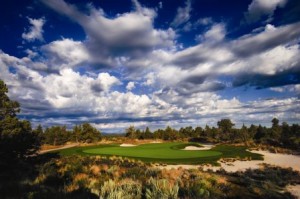 The par-3 14th at Pronghorn, just outside of Bend, Oregon.

I wake each day to National Public Radio’s Morning Edition.  One recent morning, the story corresponding to the opening of my eyes did not concern troop withdrawal in Iraq or flooding in Arkansas.  It was about America’s glut of golf courses and how the laws of supply and demand are compelling many courses to close.  “The golf courses that were built, in many cases, were built purely as an amenity to sell real estate, where the developer really didn’t do any due diligence to determine whether the golf course could survive and thrive as a business on its own,” Greg Nathan of the National Golf Foundation said in the report.  The story went on to explain how some of the courses that are closing are being transformed into public parks.

I’m very much in favor of public green spaces.  Yet as I nursed my coffee that morning, I found comfort knowing that despite some real estate challenges, Pronghorn – an upscale golf course development outside Bend, Oregon – was not going away anytime soon.  And thanks to the aforementioned challenges, the resort was now open (on a limited basis) to the likes of me.

I was living in Portland in 2004, and have nary a memory of Pronghorn’s June opening that year, just over the mountains in Bend.  Considering the fanfare that would follow (Golf Magazine Living (2006) ranked Pronghorn “#1 Best New Community in the West”; Travel & Leisure Golf (January 2009) ranked “Pronghorn the #1 Golf Course Community in the Country”; LINKS names Pronghorn one of the 20 “Best of the Best” golf properties in the prestigious Premier Properties Real Estate Guide for 2008-2009…and on and on), this seems surprising.  In retrospect, I’m fairly certain that I blocked out any mentions of Pronghorn because it was clearly going to be the kind of place where I would only spend time if I moved to central Oregon and took up looping…and got pretty good at it.  Pronghorn was ultra-private, and it was unlikely that I’d be able to pony up the half mill (or much more) for a villa or estate while I was still spry enough to swing a golf club.  No one in my golf group traveled in such fiscally blessed circles either, so Pronghorn was written off as another course I would likely never play.  My Oregon golf fantasies focused on Bandon.

Six years and several economic downturns later, things have changed.  Without going into the drudgerous details, some lots and homes at Pronghorn remain unsold, and greens and fairways still need to be watered and mowed.  For now, the 640 acres of Pronghorn (much of it, anyway) are now open for public visits. 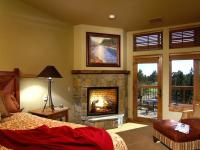 Guests at the once all-private Pronghorn enjoy suites or villas along the 18th fairway of the Nicklaus course.

Pronghorn is set in the midst of a vast swath of juniper forest just northeast of Bend, a region of high desert that looks out on both the perpetually snow-clad Cascades to the west and the rugged Ochoco Mountains to the east; rock climbers will recognize Smith Rock to the north.  The property rests four miles from any public road, so there’s truly a sense of being away from it all.  Oregon’s high desert has a special feel – serene with long views, but more inviting than the bleached landscapes of the southwest – all scented with sage.  Lodging for guests is in one of a series of villas along the 18th fairway of the Nicklaus Course.  Upon my family’s arrival at our appointed domicile, my girls ran from room to room to room, screaming “This is the nicest place we’ve ever stayed at!”  The rooms are very nice, the picture of rustic elegance, with lots of leather, tasteful golf course photos and landscape watercolors on the walls, and a gourmet kitchen with glistening Viking appliances – the stove was far too nice to cook on.

Though the villa was quite inviting, I was a bit more interested in the fairway outside the window.

The Nicklaus Course – Bandon by the Sagebrush

The Nicklaus Course at Pronghorn is billed as a desert course.  By some criteria, this may be so.  But as Central Oregon’s high desert is less austere than 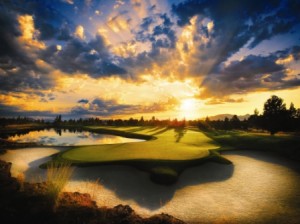 The short par-4 13th, one of the few water holes at Pronghorn's Nicklaus course.

the Sonoran desert, Pronghorn seems less target-, landing area to landing area-oriented than other desert courses I’ve experienced—which is to say, not unduly punitive.  Yes, there was scrub to clear on some tee shots, and I have little doubt that one could find rattlesnakes if you were to slice a drive into the junipers during the summer.  (It was still cool during my visit, and the “buzz-worms,” as some of my Bend friends call them, were still languid.)  But I found the course very playable for someone of my ability (a shaky 20-handicap), with generous landing areas and accessible paths to the green.  A key barometer of playability – I lost only one ball over 18 holes!  In this respect – and in the manner in which the course blends with the contours of the surrounding landscape – it’s oddly reminiscent of Bandon Dunes…albeit a Bandon Dunes where the Cascades have supplanted the Pacific, lava ridges have replaced grassy hummocks, and juniper and sage stand in for gorse.

The Nicklaus course at Pronghorn is a treat – and by all reports, the members only Fazio course is every bit as good.  But the real appeal of Pronghorn (and all of central Oregon) for golfers is the abundance of other high quality outdoor amenities available in the region.  I’m 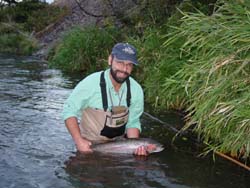 The author with a Deschutes steelhead.

a passionate fly fisherman, and within 25 miles of the resort I can find four first class trout streams (the Crooked, the Fall, the Metolius and the Middle Deschutes) plus a dozen decent lakes.  Expand the radius a bit more, and you can include the world famous Lower Deschutes, with its native rainbow trout and summer steelhead; the Deschutes also attracts rafters and kayakers.  (Guided fishing is available from Deep Canyon Outfitters.)  Road and mountain bikers will find plenty to command their attention in and around the Cascades west of Bend.  Mt. Bachelor – while perhaps not quite up to Vail/Snowbird standards in terms of terrain and powder – is a quality ski/snowboard hill that dwarfs eastern ski slopes…and is open during several months of the golf season, allowing for “powder/putt” days.  There are lava tubes and other interesting geologic phenomena to explore, horseback riding – the list goes on and on.  If you have younger family members along on your visit, Pronghorn offers several pools, and organized kids programs through Camp Pronghorn; in the summer, these programs include week-long camps built around different themes, such as “Discovering Dinosaurs” or “The World of Bugs.”

For a city of less than 100,000 residents – and especially given its humble lumber town origins – Bend boasts a fine assortment of restaurants.  Yet you needn’t stray off property to enjoy a fine meal.  We teed the kids up with mac and cheese one evening during our stay and enjoyed a leisurely sunset dinner of beef tenderloin at Cascada (in the 55,000 square foot clubhouse), which fittingly looks west over the mountains.

Pronghorn currently has a number of packages available, including a “Stay & Play”  deal entitling guests to one round on the Nicklaus Course, a night in a Junior Suite at one of the villas, one full-service breakfast and access to many of the resort’s facilities, including pool, sports courts and kids programs ($279/individual; $399/couple).  If you don’t have time to stay, outside play is available on the Nicklaus Course for $195 (plus forecaddie fee).  Visit www.pronghornclub.com to learn about other package options – include the golf/fly fish/ski Trifecta.