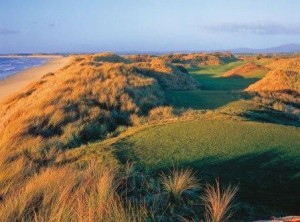 Links style golf has been successfully imported from the coastlines of Scotland and Ireland to points as far afield as Lake Michigan (Whistling Straits) and the Oregon coast (Bandon Dunes).  Perhaps its most unlikely export – and certainly one of its most successful – has been to the isolated coast of northern Tasmania, in the shape of Barnbougle Dunes.

“A young entrepreneur named Greg Ramsay had seen the land at Barnbougle, which belonged to a potato farmer and businessman named Richard Sattler,” Michael Clayton began.  “Greg had worked as a caddie at St. Andrews, and had a love for links golf, and he recognized the property’s potential.  He kept ringing Richard about the sand dunes on the edge of his property.  I think Richard, who knew absolutely nothing about golf, thought Greg was a bit mad, but eventually he gave in to his enthusiasm and persistence, saying  ‘If you can raise the money, you can build the course.’  Greg asked Bruce Hepner (from Tom Doak’s design firm) and me to look at the land and read us the ‘This design will make you guys famous’ speech.  He was certainly right about the land, and my design partners (John Sloan and Bruce Grant) and Tom Doak’s company signed on.  There was some question about the viability of the project from a business perspective.  Many felt it was too far away, too windy – too this, too that – and that there was nothing like such a project in Australia, both in terms of the site and the fact that this course would be open to the public.  Mike Keiser [who’d overcome many of the same objections at Bandon Dunes] soon stepped in and lended his support.  The local government was very supportive, and Richard agreed to proceed.  By 2003, work had begun.”

And by 2006, just two years after opening, Barnbougle took its place in Golf Magazine’s “Top 100 in the World” list.

The Australian state of Tasmania rests some 150 miles south across the Bass Strait from Melbourne; it’s sometimes called ‘the island off the island.   Tasmania is cooler than mainland Australia, and a bit wetter.  With its mountainous terrain and slower pace of life, it may seem to have more in common with New Zealand than Australia, especially to western perceptions.  (Those whose exposure to Tasmania has been limited to the Tasmanian Devil character from Warner Bros. Looney Tunes cartoons may be surprised to learn that such an animal does exist, carnivorous marsupial the size of a smallish dog).  With its rolling dunes, marram grass and breathtaking ocean vistas , Barnbougle could be easily mistaken for Ballybunion on Ireland’s west coast – with wider fairways.  “Barnbougle is not a difficult course,” Michael continued.  “Some of the fairways are amazingly wide – 80 or 90 yards.  Still, it’s amazing how crooked players can hit it when they don’t feel constrained by the trees that they’re accustomed to have lining the fairways – especially when the ball gets into the wind.   If there’s one complaint some people have about Barnbougle, it’s that the course is too windy.  It’s true that it can be windy at times, but no more so than Royal Birkdale or Shinnecock Hills.  After all, it’s the wind that formed the land that that makes the course worth playing.  In reality, the course is routed so the longest holes are with the prevailing wind; with the exception of the last few holes, only the shorter holes are against it.”

One of the shorter holes that captivates Michael Clayton (and most visitors) is the fourth, which measures a scant 296 yards from the tips.  On days when the wind is down the hole is certainly in reach, though to reach it, one must carry a gaping bunker that’s 20 feet deep—and reputed to be the largest sand trap in the southern hemisphere.  “If you can carry it at 220 yards or so, you can kick it down on to the green,” Michael advised.   For those of us less able to depend on such a carry, he advises to play to the side of the fairway that’s opposite the day’s pin placement.  The 446-yard eighth hole is another great hole, though it has sparked some controversy among regulars.  “It’s a long par-4 with a dune in the middle, essentially splitting the fairway,” Michael explained.  “You have to choose which path you’ll take off your drive.  It’s a harder play to the left as there’s more carry and less room, but you have a much better perspective of the hole as you’re higher up.  It’s a big two-shot hole however you look at it.  Perhaps the fact that it arouses debate shows that it works as a golf hole.”

“One of the things I love about Barnbougle is the relaxed atmosphere of the place,” Michael said.  “There are none of the restrictions or stratifications that are so much a part of the Australian private club scene – it’s very friendly, and guests feel none of the intimidation that public golfers experience when visiting a private club.  A bit of this comes from Tasmania’s rural character, the rest from the fact that Richard was unacquainted with many of the formalized customs of golf.  He didn’t want rules like ‘no jeans,’ and there aren’t any such rules.  People come to experience the beauty of the place and the great game that the course affords.  An added pleasure is the chance to mingle with the people who live here.  At night, the clubhouse turns into the local restaurant, and many non-golfers come in for dinner or pint.  To me, it’s wonderfully refreshing.  If the same course was in Melbourne, guests wouldn’t have the chance to meet and mingle with the course’s staff or neighboring farmers.”

For Michael, one satisfying facet of Barnbougle’s evolution was the development of a new golfer, Steven Sattler (landowner Richard’s son).  “Steven was 13 or 14 when we started breaking ground on the course.  A farm boy, he’d grown up playing football; though he might have heard of Greg Norman, he’d certainly never played golf.  As the grass of the fairways started growing in, he started to play.  Soon he was good enough to be invited to compete in a schoolboy’s tourney, which took place at a course in town.  He’d never seen another golf course, and when he came back, he said ‘It was terrible, trees all over it, just terrible.’  Visiting the other course, he began to realize that what he had in his back yard was truly something special.”

Michael Clayton turned professional in 1981 after a very successful amateur career, which included winning the Australian Amateur Championship in 1978 and the Victorian Amateur Championship in 1977 and 1981.  After turning professional, he devoted his time between the Australian and European tours, winning a number of tournaments including Victorian Open Championship 1982 and 1989, Korean Open 1984, Tasmanian Open 1984, Australian Matchplay 1991, Coolum Classic 1994 and Heineken Classic 1994.  As well as being a talented professional golfer, Mike is a journalist, writing regular golfing articles for the Melbourne Age Newspaper and Australian Golfing Magazine.  He is also an accomplished golf course architect, with designs at Ranfurlie, Barnbougle Dunes and St Andrews Beach (the latter two with Tom Doak) to his credit.

Getting There:  Barnbougle Dunes is in the Tasmanian town of Bridport, roughly 1.5 hours from the airport in Launceston, which is served from Sydney and Melbourne by Qantas Air (800-227-4500; www.qantas.com).

The Course:  Barnbougle Dunes plays 6,724 yards from the tips to a par 71.  Green fees are $98 ASD for 18, $120 ASD for all-day play.  Barnbougle is a walk-only course, unless guests have a medical certificate to verify an illness or disability.

(from Fifty More Places To Play Golf Before You Die)