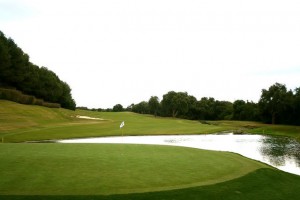 The 17th green at Valderrama, site of frequent architectural re-interpretations.

For the last decade Club de Golf Valderrama, near the southern tip of Spain, has been widely considered the finest golf course in Continental Europe.  Many draw parallels between Valderrama and Augusta National in Georgia, a recognition of the course’s immaculate conditions, thoughtful design and elite membership.  “Valderrama is extremely exclusive,” said Bill Hogan.  “Its membership is a who’s who of Europe’s business elite.  Many royal families belong there too. While it may very well be the Augusta of Europe, there’s one great difference:  with a little planning, a visitor from overseas can get out there and play.  You’re made to feel very welcome.”

The course that is now Valderrama had its first incarnation in 1974 as Sotogrande, and was designed by Robert Trent Jones, Sr.  When a second course was built near the site in 1981, Sotogrande’s name was changed to Las Aves.  The course evolved into Valderrama—and into a world class venue—thanks to the vision and resources of Jaime Ortiz-Patino, considered one of the great gentleman of golf.  A Bolivian tin magnate, Ortiz-Patino purchased the course and adjoining property in 1984, and lured Jones back to help him make the refinements necessary to project Valderrama into the limelight. (Valderrama, incidentally, is the name of estate that once graced the land.)  The evolution from good to great occurred with great rapidity; by the late 1980s, the course was hosting the Volvo Masters, one of the European Tour’s flagship events.  By the late 90s, Valderrama was hosting the Ryder’s Cup; it was here in 1999 on the par-5 17th that Tiger Woods’ eagle putt slid off the treacherous green, down a slope and into the adjoining lake, taking with it any hope for victory.

Valderrama is set on gently rolling land, with fairways bordered by mature cork and olive trees.  The cork trees frequently come into play, as many hang over the fairway, on some holes impeding approach shots from drives that are on the short grass.  (On the second hole, a large cork tree rests in the center of the fairway, providing a target, providing you can draw the ball appropriately.)  Special care has been taken to steward the land the course winds through; 40 acres have been set aside as wildlife sanctuaries, providing habitat for birdlife, amphibians, otter and over 20 species of butterfly.  Two prevailing winds can color a player’s shot choice:  the poniente, which comes from the land and is generally a hot breeze, and the levante, which blows in cool from the Mediterranean.  “It’s as pretty a golf course as you’ll find anywhere,” Bill continued.  “They’ve kept the standards of maintenance up to such a high level, it seems that each blade of grass is individually cared for.”

One should not merely play a round at Valderrama; one should spend a day there, as Bill explained.  “Valderrama offers a package called the Valderrama Golf Day, and I always recommend that our clients who are visiting there take advantage of this.  After all—if you could go to Augusta for a day, would you just play golf and leave?  You start out by having lunch in the dining room of this extremely elegant clubhouse.  The restaurant is one of the best in Spain, in my opinion.  The clubhouse is also home to Mr. Patino’s golf museum.  He’s assembled one of the finest personal collections of golf antiques in the whole world.  There are driving irons and feather balls from the 1700’s; many of these individual pieces are worth hundreds of thousands of dollars.  If you get permission, you can see this private collection.  For anyone with a historical bent, it’s worth the price of admission in itself.

“After lunch, you can play a round on Valderrama’s par-3 course.  It’s modeled after the executive course at Augusta.  It’s a blast, a chance to warm up.  If you wish, you can next visit the driving range.  Then it’s on to the championship course.  There’s a starter on the first tee, everything is very orderly, very proper.  Everyone there, from Mr. Patino to the General Manager Derek Brown, who’s Scottish, is extremely hospitable.  As you tee up, you look down and the tee box is manicured perfectly.  You’re frightened to take a divot; in fact, there don’t seem to be any divots.  Each group has a fore-caddie; you can take a cart if you wish.  There are some quite famous holes on Valderrama, like number four, which is often featured on ‘great golf hole’ compilations.  Each of the holes are distinctive.  The night after you’ve played, you can walk through the course quite clearly in your head and recall your shots—and which ones you might have played differently.  After your round, you return to the dining room for a splendid dinner.    The whole experience of the day is extremely special.”

The last four holes make for a great finish at Valderrama. “When I have groups there, we usually play a Ryder cup style tourney—which is to say, match play,” Bill said.  “Most of the matches are determined on the last 4 holes.  Number 15 is a downhill par-3 that plays over a barranca (gorge).  It’s great fun to hit down to that green.  Number 16 is a short par-4 that doglegs severely to the right.  On paper, it doesn’t look like a whole lot.  But if you’re not on the right place on the fairway, you’re not getting there in two.”

The par-5 17th has gained much notoriety in the last decade from its constant reworking by the likes of Seve Ballesteros, Roger Rulewich and Jaime Patino himself, as well as the dramatic role it’s played in several tournaments.  Drama and design controversy aside, it is a beautiful hole.  “There’s a natural amphitheatre as you approach the hole, to the right of the second landing area,” Bill said, “and a wall or gabion that’s covered with bougainvillea.  When the bougainvillea is in bloom, it’s just outstanding.”  Strong players can reach the small green in two, but their shots have to clear a lake that guards the front, and bite enough to keep from rolling into the prodigious bunkers behind.

“If the match hasn’t been settled by number 17, number 18, a long par-4, is a great match play hole,” Bill continued.  “You can try to bomb a drive over trees on the left to give yourself a short-iron to the green.  If you don’t make it, however, you’re in trouble.  I think the smarter play is to hit 3-wood or long iron to the fat portion of the fairway, and then hit another similar club up to the green.”

Bill Hogan is the President of Wide World of Golf (www.wideworldofgolf.com), America’s oldest golf tour company which has escorted golfers around the globe since 1957.  He is also principle of Hogan Sports Inc. (WWG holding Corp) and Hogan Golf Services, a consulting company.  Bill has played golf in 43 different countries around the world, has won 14 amateur team and individual tournaments.  He serves on the Golf Magazine Panel that ranks the World Top 100 and USA Top 100 Courses, alongside such golf legends as Arnold Palmer, Jack Nicklaus, Gary Player and Annika Sorenstam.  Bill is a member of St. Andrews GC in Scotland, Pasadera CC in California, Barton Creek GC in Texas, and serves on boards for such organizations as Virtuoso Travel Specialists, Visit Scotland tourism bureau, Wales Tourist Bureau and Hospice Foundation for the Central Coast.  He splits his time between Austin, Texas and Carmel, California with his wife Michelle and 3 children, Haley, Nick and Grant.

Getting There:  Club de Golf Valderrama is located in the town of Sotogrande in Andalucia province; it’s just a stone’s throw from the Rock of Gibraltar, which can be seen from the 11th green at Valderrama.  Sotogrande is on the outer limits of the popular Costa del Sol region, which is a major golf destination, having more than 40 courses.   Visitors traveling to Sotogrande can fly into Malaga, which is served by most major carriers and is one and a half hours from Sotogrande.  The city of Seville is also in Andalucia province, though it’s a few hours further from Valderrama.

Course Information:   Valderrama measures 7,018 yards from the championship tees and plays to a par-71.  Green fees range from 250 to 275 Euros.  For more information, visit www.valderrama.com or call +34 956 79 12 00; tee times can be made via email at greenfees@valderrama.com.