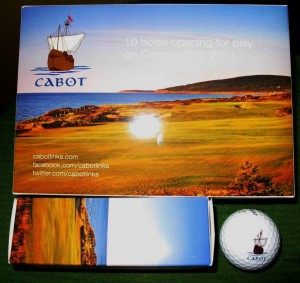 This box of Cabot Links Pro V1s easily out values the author's golf ball outlays for the next three years.

Given the imperative to show return on investment as soon as possible, golf course developers cannot afford to take a “build it and then they will come” approach.  Smart impresarios know that they should begin building buzz before the first bulldozer arrives at the proposed sight. Indeed, a high level of pre-pre-opening excitement about a course can keep seed money flowing should unexpected development bumps (like extra drainage work on the back nine or a major investor pulling out) be encountered  on the road to opening day.

As a sometimes golf writer of no major significance, I have yet to receive a leather golf bag emblazoned with the logo of the coming creation from RJT II or Greg Norman.  I have, however, received tasteful postcards from Renaissance Golf Design (Tom Doak’s company) illustrating new projects in progress, calendars from Rees Jones (mostly profiling past designs and renovations) and even a very glossy book highlighting a re-design in progress of the Old Course Hotel in St. Andrews (I can’t recall who funded that project).

Last week, I received my most impressive course-in-development package to date – a dozen golf balls from Ben Cowan-Dewar, one of the principals behind Cabot Links (www.cabotlinks.com), a much anticipated layout on the western edge of Cape Breton (the island of Nova Scotia’s mainland).  First, I must mention that this was not the reclaimed bag o’ balls so perfectly suited to my game that I generally pick up at the local department store, but four sleeves of Pro V1s, an arsenal whose retail value may very well eclipse my golf ball outlays for the last three years.  Inspecting each precious sphere – imprinted with the Cabot logo, a square-masted schooner asail on calm seas – I quickly estimated how long it would take me to lose the entire dozen (1.5 rounds) and weighed the relative benefit of giving the balls to various friends to curry favor instead of sending them into assorted ponds/forests.

But beyond the obvious value of the contents, I was taken with my Pro V1s packaging.  The outer box features a full bleed photo of an emerald green fairway bordered by a fringe of marram grass and the blue Gulf of St. Lawrence to the left and several islands in the background.  Toward the far right of the package lurks the suggestion of a pot bunker and a putting surface.  Each of the sleeves features the same image, wrapped around to give a panoramic perspective.  A greeting card bearing the image yet again on the front (branding is all about consistency!) accompanied the Pro V1s, and it features a paean to the possibilities of Cabot Links – dubbed “Canada’s only authentic links” – by no less a luminary than Lorne Rubenstein, arguably the dean of Canadian golf writers.

The image, incidentally, is of the 15th hole, a 418 yard par-four that hugs the beach from tee to green.

The promise of Cabot Links is indeed great.  There are few places on the Atlantic seaboard more beautiful than Cape Breton – home to an old school gem, Stanley Thompson’s Highland Links, two hours to the northeast of Cabot Links.  So the setting promises to be stunning.  And the assembled team – entrepreneur and architecture aficionado Cowan-Dewar, who is also co-founder of the Golf Club Atlas (www.golfclubatlas.com) and founder of GolfTI, a golf travel company; Ran Morrissett, Cowan-Dewar’s co-conspirator at GCA; Canadian architect Rod Whitman and Mike Keiser, of Bandon Dunes/Barnbougle fame – brings a tremendous pedigree to the project. (Keiser, who seems to know a thing or two about getting linksters to schlep to out-of-the way places in droves, joined the team a bit later in the game, and has been able to accelerate development.)

Construction is nearing completion at Cabot Links, and the course is slated to open for 10-hole play on Canada Day, July 1st (a 4,000-odd yard tease that served Keiser quite well at Old Macdonald); the full 18 will be open in spring of 2012.

Great promotional packages are only that.  But knowing Mike Keiser, Ben Cowan-Dewar and Ran Morrissettt – and having heard great things about the work of Rod Whitman – I imagine that Cabot Links will live up to the tasteful hype that will I likely have deposited at sundry municipal courses around Portland, Oregon by the time you read this.

Visit www.cabotlinks.com to sign up for updates on the course’s progress.