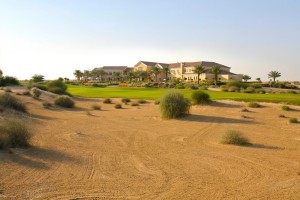 The ninth hole at Arabian Ranches.

Dubai is one of seven emirates of the United Arab Emirates, a small and tremendously wealthy nation sandwiched between Saudi Arabia and Oman.   Dubai city (often simply referred to as Dubai) is situated on the Persian Gulf near the eastern edge of the country.  Cultural commentators sometimes refer to it as the city of the future, a phrase spoken with a mix of wonder and, one senses, fear.  Though it’s geographically near the heart of Arabia, Dubai is a wild polyglot of ex-pats and guest workers—only 10 to 15% of the population of nearly two million is Arabic.  The city has experienced one of the most dramatic growth explosions witnessed anywhere in modern times, as city fathers hope to make it the business and recreation center of the Middle East; much of the city’s soaring sky-line did not exist ten years ago.  Anything, it seems, is possible, given adequate resources and unlimited imagination.  This sense of infinite possibility extends to golf.

Golf was introduced to the Arabian Gulf by Americans working in Saudi Arabia in the early days of the petroleum industry for companies like Aramco and Tapline.  Water (and hence, grass) being in short supply, makeshift courses were created in the midst of the desert, as late great golf writer Dick Severino described:

“The balls are red, the greens are brown and the fairways are more like runways. Only the rough lives up to its name.  The balls are red because in the glare of the desert sun you can’t always see a white ball against the sand and rocks. The greens are brown, or sometimes black, because they are made of oil-treated sand. The fairways are hard because they are made of sand or marl sprayed with oil and compacted to preserve them from the desert wind. As for the rough, one golfer put it this way: “There just ain’t nothing else out there.”

Regulation-length sand-oil courses were constructed in Saudia Arabia, Bahrain and Kuwait.  The first grass course in the Middle East – meaning grass fairways and greens – did not come into being until 1987.  This track, the Majlis course at Emirates Golf Club in Dubai, regularly hosts a PGA European Tour event, the Dubai Desert Classic.  It was the first of many to spring up.

“On my first visit to Dubai, I was surprised to find so many golf courses in the midst of the desert,” Ian Baker-Finch recalled.  “I was even more surprised to find wall to wall grass.  The courses were of a parkland style, with lush green grass and trees everywhere.  When I spoke to Emmar Properties Chairman Mohamed Ali Alabbar about my vision for a golf course at the Arabian Ranches development, I told him that I wanted to see more desert incorporated in the design.  Soon after, we visited one of his botanical gardens to meet with an arborist to discuss what sort of local flora might be available to augment a desert design—a design that I imagined would bear more resemblance to a Scottsdale golf course or Palm Springs layout than the early designs I found in Dubai.”

With his design at Arabian Ranches, Ian Baker-Finch did not create distinct bunkers; instead, he attempted to incorporate the site’s sandy terrain as natural waste areas, this in part to enhance the impression of ‘fairway as oasis.’  “Before it became a development and golf course, Arabian Ranches was a camel and goat farm,” Ian said.  “There are native ghaf trees on the property [a member of the evergreen family, and one of the most robust plants in the desert].  When the camels were present, there was only 2 or 3 feet of foliage at the top.   Once the camels were removed, the foliage grew down nearly to the ground.  They add a great perspective to the course, and certainly let you know that you’re not in Scottsdale.”  Thanks to the big winds that blow here, the greens at Arabian Ranches are exceptionally large to give players a bigger target.

Building a course in the desert poses unique challenges – one that you might anticipate, and one that you might not.  “ Once you begin moving dirt around and exposing sand, the sand dunes will blow around,” Ian described.  “I remember being on the site and shaping several holes, only to come back the next day and find that they’d disappeared—they were covered with sand, returning to the desert.  It took weeks to recover.  We learned that the only way to proceed was to shape one or two holes at a time and intensively grass them.  If we did otherwise, they’d go away.”

The other problem Ian and the team faced at Arabian Ranches was water – too much water – in the wrong places.  “I had envisioned the fairways as being lined with native desert areas where an errant shot could be found and chipped back on the short grass,” Ian explained.  “Unfortunately, once you start watering a course, the wind blows it about a bit, and grass that’s dormant in the sand will grow.  I left Dubai for a time as the course was nearing completion and returned when it was slated to open.  I was horrified by what I saw – instead of barren areas adjoining the fairway, there were corridors of six-foot high grass.  This made Arabian Ranches seem so narrow that it was incredibly intimidating.  It’s a great credit to the greens keeping staff that they’ve managed to control the grass; it’s a constant battle.”

There are plenty enough golf courses in Dubai (and a number of others in development) to justify a golf vacation in this direction.  These include the two courses at Emirates Golf Club (Majlis and Wadi), the four courses at Jumeirah Golf Estates (Earth, Fire, Water and Wind), The Montgomerie, The Dubia Creek Golf & Yacht Club and the Four Seasons Golf Club Dubai.  But the city’s zest for over-the-top architecture and its incredible energy level are an equal attraction.  (Writing in the New Yorker, Ian Parker described the city as having developed so quickly, “it seems to be living in its near future, rather than its present.”)     “The growth that Dubai has seen is simply amazing,” Ian said.  “When I first went in 2000, one of my hosts took me to a symposium where pre-sales for new residential projects were being conducted.  One was called the Marina Project, which was described as having 50 high-rise buildings, 20 with 50 stories or more.  Three years later, it was finished – it houses 150,000 people.”  Must see creations include the distinctive Burj-al-Arab, billed the world’s first “7-star” hotel, with a design mimics the billowing sails of a dhow, the traditional Arab sailboats that ply the Gulf below; the Palm Islands, a series of man-made islands in the Persian Gulf that will one day hold luxury homes, retail establishments and hotels, and from the sky, resemble palms; and Ski Dubai, the Middle East’s first year-round, indoor ski resort, and the largest snow park in the world – no small technological feat in a place where temperatures can reach nearly 120 degrees!

Ian Baker-Finch, a native Australian, is best known for winning the 1991 British Open at Royal Birkdale.  He has won tournaments on all four major tours, and holds 16 titles worldwide.  Ian also served as Presidents Cup Co-Captain with Peter Thomson in1996, and three times as Captain’s Assistant to Gary Player for the International Team in 2003, 2005 and 2007.  He is also the president of Baker Finch Design, which has been developing courses with traditional values and modern designs, which include Kennedy Bay in Australia, Arabian Ranches Golf Club in Dubai, and coming courses in Ireland and St. Croix.  He has recently teamed up with Gary Player Design to design and execute golf course design concepts worldwide.  A well recognized TV personality, Ian provides golf commentary for CBS Sports on the PGA Tour, and for TNT at The Open Championship and has previously worked with both ESPN and ABC Sports.  Ian is a sought-after talent for corporate events.  Prestigious companies such as Accenture, American Express, Merrill Lynch and FPL have Ian Host their golf days and gala dinners.  Ian is involved in a select number of charitable events in both the US and Australia, and has helped to raise over a million dollars for organizations and causes which he is personally committed to.   He lives with his wife and two children in Florida.

Getting There:  Dubai is served from the United States via many carriers, including

Aeroflot (212-9442300; www.aeroflot.ru)  and Emirates (www.emirates.com).   The weather is most comfortable during the winter months, from November through March.

Accommodation:  There are eleven guests rooms available in the club house at Arabian Ranches  (+971 4 366 3000;  www.arabianranchesgolfdubai.com).  There’s a wide range of accommodations in downtown Dubai, from the world’s only 7-star hotel to one and two star properties.   Thatsdubai.com provides a list of available options.

(from Fifty Places To Play Golf Before You Die)