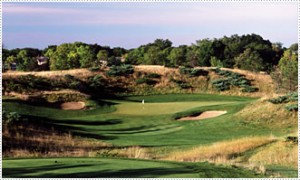 Question:  where was the site of the first 18-hole golf course in America?

In the sandhills of North Carolina, around Pinehurst?

Try again – it was just west of the city of Chicago, in the town of Belmont.  The year was 1893, the course was the first incarnation of the Chicago Golf Club, and its creator and most energetic booster was Charles Blair MacDonald.  MacDonald hailed from a wealthy Chicago family and attended university at St. Andrews in Scotland, where he befriended Old Tom Morris and fell in love with the game of golf.  He became well-versed in all aspects of the game – equipment manufacturing, architecture and playing (he was U.S. Amateur champion in 1895), and the enthusiasm he brought back to the Midwest helped make greater Chicago an important early golf outpost in the United States.  Many venerable golf clubs sprang up in the wake of Chicago Golf Club (which relocated in 1894 to its current location in Wheaton) – Butler National, Medinah and Olympia Fields, to name a few.   Chicagoland also has an abundance of fine facilities open to the general public—some 500 courses in all, including The Glen Club, which opened in 2001, yet harkens back to an earlier time.

“There are so many great, old private clubs around Chicagoland,” Josh Lesnik observed.  “The Glen Club is built on the tradition of these old clubs.  When you enter the grounds and the clubhouse, you feel like you’re discovering something special.”

The Glen Club, with its 195 acres of meandering streams, valleys and copses of mature pines and catalpa, is a surprising sanctuary in the suburb of Glenview on the North Shore, just 15 miles from the hubbub of The Loop.  It’s even more surprising when you realize that until 1995, the grounds of the Glen Club (and 800 surrounding acres) were the site of the Glenview Naval Air Station, which operated sea planes on nearby Lake Michigan, as well as anti-submarine planes.  The land here didn’t lend itself to a first-rate parkland course in its unadulterated state.  To help make this happen, the course’s developers, Kemper Sports Management (which oversee operations at over 75 courses around America) brought in Tom Fazio, an architect who’s been known to move a bit of dirt around to realize his vision.  “When you consider the location of The Glen Club, you expect flat terrain,” Josh continued.  “It’s actually quite contoured.  Fazio brought in two million cubic yards of dirt and 4,000 trees.  You’d never know that much of the back nine was built on a runway.  (Before the course was built, the base had an elevation variance of 3 feet; post-Fazio, some holes have as much as 40 feet in elevation change.)  The last two hours of your round, you’re in the center of a natural haven, surrounded by blue herons, egrets and ancient trees.  I think Tom did a great job in capturing the spirit of the old clubs of Chicago.  When I walked the course with Tom Doak, he stood on the seventh green and said it could easily be a Macdonald green at Chicago Golf Club.  While the fairways are wide enough to give the average player a good level of satisfaction, there’s plenty of challenge from the back tees for the guys playing the Nationwide event that’s held here.

“I always feel that if I survive the first seven holes, I can start to score a bit.  Six and seven are long par 4’s, as much golf hole as you’d want anywhere.  The fourth is a short par-3, maybe 40 feet downhill.  The green is surrounded by fescue-covered dunes-like mounds.  It’s fun to hit a big downhill shot.  Though the moniker ‘windy city” really comes from the bluster that our politicians can generate, the wind can blow on this hole and make club selection tricky.  The 8th hole is a favorite, a short dogleg left par-4.  There’s a creek that meanders along on the left side of the fairway, eventually emptying into a lake.  You don’t necessarily need a driver off the tee, but you need to be accurate.  On the back, the par-5 14 is a reachable in two par-5 if you risk flying the fairway bunker on the left.  The green here is surrounded by huge old trees; one holds an owl’s nest.  Number 16 is an uphill par 4, with a challenging approach shot to a two-tiered green.  You get the feeling you’re playing a hilly course, which is an odd sensation for Chicago.”

Part of the appeal of The Glen Club are the nostalgic touches that speak to old Chicago golf.   The clubhouse is home to the Illinois Golf Hall of Fame exhibit, which features plaques for each member, including Charles Blair Macdonald, Chick Evans (the first player to win both the U.S. Amateur and U.S. Open in the same year, who later established the Chick Evans Caddie-Scholar Fund) and PGA tour winner D.A. Weibring.  The 48,000 square foot clubhouse features a grand ballroom and 21 overnight rooms for visiting golfers.  “Each of the rooms are named after old clubs in Chicago,” Josh added, “and are decorated with black and white photos of the clubs.  The food and service at The Grill are memorable.  Overall, The Glen Club has a very old-fashioned feel.  Though it’s a public course, it has the ambiance of an old private club.”  In keeping with the past, the course has instituted a caddy program (rare for a daily fee course), which since Chick Evans’ day have been an important element of Chicago golf.

“One of my favorite moments at The Glen Club came in 2001, as we were preparing to open the course,” Josh shared.  “One of Chicago’s great amateur players, Bill Sheehan Jr. (who, among other achievements, won 1998 and 2000 U.S. Senior Amateur and 1999 British Senior Amateur), came out to play a pre-opening round with me—I was the General Manager at the time.  We were joined by Mike Keiser, who owns Bandon Dunes.  I was amazed by Bill’s ball-striking – the best I’ve ever seen.  And I was taken with Mike’s ideas about what people like about golf and golf courses.  As we made our way around, it was thrilling for me to see each of these men enjoy the course in their own way.”

Josh Lesnik is the president of KemperSports Properties.  From 1998 through 2000, Josh spearheaded the opening and operation of Bandon Dunes Golf Resort in his role as the resort’s General Manager.  He also served as the pre-opening and first-year General Manager of The Glen Club.   In his previous post at KemperSports, he served as vice president of marketing.  Josh holds a Bachelor of Arts degree from Drake University and a Master’s degree in marketing from Roosevelt University.

Getting There:  The Glen Club is in Glenview, IL, conveniently located to O’Hare and Palwaukee Airports.

Accommodations:  The Glen Club (847-724-7272; www.theglenclub.com) has 21 rooms available for guests; stay and play packages are available.  If you decide to stay in the city, the Chicago Convention and Tourism Bureau (877-244-2246; www.choosechicago.com) provides an overview of accommodation options.