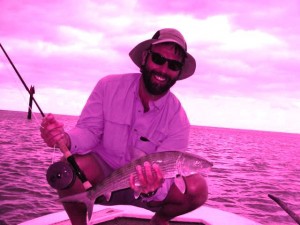 The author poses with a very average size bonefish from the flats around Andros Island.

Andros Island can make one rethink some of the attractions conjured up by the phrase “The Bahamas.”  There are no casinos, no high-rise hotels, no Club Meds, and precious little in the way of duty-free shopping. For its devotees, these are precisely the appeals of the Bahamas’ largest yet least developed island, a haven for birds, wild orchids, and most famously, bonefish.
The three islands that comprise Andros—North Andros, Mangrove Cay, and South Andros—total 2,300 square miles, and are home to roughly 7,000 full-time residents.  Most dwell in the island’s three villages, Nicholl’s Town, Andros Town, and Congo Town, leaving much of the island in its natural state:  a tangle of mangrove interspersed with fresh and saltwater channels that sustain a rich ecosystem, including 200 bird species and 50 orchid species. Along the island’s east coast, Andros Barrier Reef stretches 140 miles, making it the third-largest reef in the world. The marine life drawn to the coral reefs, along with the presence of 59 blue holes—vast underwater cave systems—has made Andros a popular snorkeling and diving destination.  Some of the blue holes spiral hundreds of feet below the ocean floor, creating miniature ecosystems of their own.  A descent into the Stargate, Conch Sound, and Little Frenchman blue holes are a rite of passage for passionate divers.  (Less seasoned snorkelers, take heart:  much of the marine life drawn to the blue holes congregates at the entrance, so you needn’t enter the cave to experience their appeal.)

The brilliantly crystalline seas surrounding Andros are dotted with hundreds of “flats”—shallow-water areas six inches to three feet deep—providing an ideal habitat for bonefish, one of light tackle anglers’ most prized species.  For bonefish aficionados, Andros offers a double bounty—both huge numbers of smaller bonefish (in the three-to-five-pound range) and good numbers of true trophy specimens eclipsing ten, even 15 pounds.  On almost any given day, an angler who can cast 50 feet will have shots at ten pound–plus bonefish; this can’t be said of anywhere else in the world.  Coming upon a school of feeding bonefish, their tails waving gently above the surface of the water as they root about in the sand for crabs and shrimp, is one of fly fishing’s most heart-thumping moments.  If you can make an accurate cast and convince the fish to take your offering, get ready for an adrenaline rush:  The bonefish’s spindle-shaped body and large forked tail are built for speed.  Hooking even a smaller fish is like tying into a speeding Ferrari.
The Andros Island Bonefish Club is well situated for Andros explorers, at the southeastern tip of the north island.  Spartan (but clean and air-conditioned) rooms look out upon the Atlantic. The property boasts a freshwater pool (a rarity on Andros) and many hammocks for afternoon naps in the Caribbean breeze.  While brief afternoon rain showers are not unheard of, winter visitors can count on lots of sunshine, and temperatures in the low 80s.  (May through October is considered the rainy season, and tends to be more humid.)  It’s not surprising that the Club’s chefs specialize in seafood; conch fritters are a local favorite.
Guests seeking a slightly faster pace can board a puddle jumper bound for the Bahamian capital of Nassau.  Through the 1600s, Nassau was known as a haven for pirates, who plundered British, French, and Spanish ships with equal enthusiasm as they made their way to the New World; this was the domain of the notorious Blackbeard (given name Edward Teach), who was said to have woven hemp into this hair and/or beard and lit it on fire for dramatic effect. Visitors today will find Nassauites far more accommodating, whether they opt for 18 holes at the Cable Beach Golf Course, a tour of Fort Charlotte (which dates back to the early days of British rule), or a few spins of the roulette wheel at the Atlantis Resort & Casino.  (There’s duty-free shopping, too.)
After a day on/in the water or rambling about Nassau, it’s customary for Andros Island Bonefish Club guests to gather at the patio bar that fronts the Atlantic. Over cocktails, a few visitors will usually rig a heavy fishing rod with a chunk of bait and hurl it off the patio in hopes of hooking one of the sharks that chase bonefish into the waters below as twilight descends.  The potential of having a 200-pound lemon shark catapult six feet out of the water trying to shake the hook as cocktails are being refreshed make an Andros happy hour something to remember.

Many travelers will reach Andros via Nassau, which is served by American (www.aa.com) and Continental Airlines (www.continental.com) , via connections in Fort Lauderdale.

(A version of this story originally appeared in American Lawyer)