Among Alaska’s fishing cognoscenti, the Kanektok River has long had a stellar reputation for its seclusion, scenery and angling. Insiders simply refer to the Kanektok as the Chosen. The river flows roughly 100 miles from its source at Pegati Lake, coursing westward between the Kilbuck and Akh 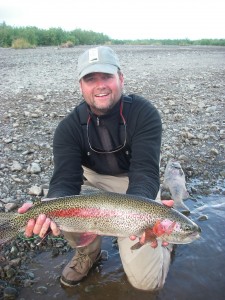 lun Mountains and the tundra of the Yukon Delta National Wildlife Refuge, before meeting the Bering Sea. Fish here include Dolly Varden, Arctic char, all five species of Pacific salmon and leopard rainbow trout, so nicknamed for their fine round spots.

There is a reason the Kanektok has remained so spectacular: the only way to fish it is to fly to the lake on a bush plane outfitted with pontoons and float a raft to the mouth. Anglers can opt for a weeklong guided excursion, which will cost $4,000 a person; or can hire an outfitter to fly them in and provide the raft and any other gear they may need, and go it on their own, for a total of roughly $4,000.

My fishing buddies Pete Gyerko and Geoff Roach and I opted for an outfitter last year. Although cost was a consideration, we mainly wanted to go it alone for the sense of adventure such a trip inspired. Catching fish until our arms hurt was one thing; surviving possible grizzly bear encounters, the elements and any other hardships the river might throw at us was another. Did I mention that one of the hardships would be the absence of beer?

Steve Powers of Papa Bear Adventures, who we retained as an outfitter, was adamant about the 1,200-pound weight limit for the Beaver de Havilland that would fly us in. Considering that the three of us were pushing 650 pounds — and that the raft and cooler added another 250 pounds — we did not have much room to spare. The cases of microbrews I had imagined did not make the first cut on our extensive packing list. Steaks and ice were out, too. After many menu revisions, multiple weigh-ins at home and sometimes heated debate (Do we really need two pounds of couscous?), we arrived in Bethel, thinking we were under weight.

But the scale said we were still 78 pounds over. Backup food, box wine and spare waders were tossed aside; still 10 pounds over. Lose the toilet seat or the bug tent. With the mosquitoes already gnawing on our ankles, the toilet went. One pound over. “Go light on breakfast,” Powers said, and we started in on the box wine and repacked our dry bags.

The next morning, we boarded the Beaver, and the pilot Boris Forester flew east. As we sailed above the clouds, Forester said, “I think we must be above the lake, but I want to be sure.”

We circled just above mountain peaks for a few minutes. When a small opening in the clouds appeared, Boris shot down. We were soon skimming the lake’s surface. Below our pontoons, red shapes darted — sockeye salmon that had reached the lake to spawn. Forester coasted to the shoreline, and we unloaded our gear. He edged the Beaver out of the shallows, waved goodbye and accelerated into the clouds. We were truly on our own.

As we began our float, we were struck by the abundance of fish life. For 15 miles, we drifted over school after school of pink salmon. It was impossible to get a fly to the Arctic char and Dolly Varden we hoped to hook, because each cast snagged a salmon.

By the next morning, the pinks had thinned out, and Geoff had tied on an egg pattern. (The Kanektok’s nonsalmon species favor salmon eggs when the salmon are spawning, and salmon flesh when the spawning is done.) A cast or two later, Geoff’s rod was bouncing violently, and he called out. I have seen Geoff catch many large fish in silence, and ran to see what was on the end of his line.

He pointed across the river to the trip’s first grizzly. The bear, a modestly sized 500 or 600 pounds, was combing the shore for salmon carcasses, and seemed indifferent to us. A few times it raised its head to sniff the air, but soon returned to scavenging.

Seeing the bear seemed to alter our luck. That day, we caught Arctic char and Dolly Varden at will — 30, 40, 50 apiece. Some were pushing 25 inches and 5 or 6 pounds, brilliantly mottled in black, gold and orange. We found a beautiful campsite that looked out at a mountainside dotted with stands of blueberries.

As Pete served up a meal of spaghetti with pesto (washed down with low-weight/high-octane Scotch), a mother griz and her cubs picked their way from bush to bush, methodically eating their fill. With the sun still high in the sky at 10 p.m. and a warm breeze blowing upriver to keep the bugs at bay, it could not get much better.

The float settled into a comfortable routine. Wake up, wader up, make breakfast, break camp, fish our tails off, make camp, make dinner, toast the day and go to sleep. Although there were copious signs of grizzlies at every gravel bar we waded — scat, half-devoured salmon, large paw prints — we had no more close encounters. As the river widened and braided up in its lower stretches, we found more and more of the Kanektok’s famed leopard rainbows, which aggressively grabbed our flesh flies that we cast up against the omnipresent willows. We also found more and more silver (coho) salmon, with freshly landed fish finding their way to the frying pan.

It was not always easy going. Our tent stakes were next to useless on the gravel bars, and we had to tie our tents to driftwood and weigh down the sides with hundreds of pounds of gravel. Despite such precautions, our bug tent imploded in high winds on the fourth night.

On our last afternoon, Pete realized that he had been misreading his new global positioning system all week, and we were actually 10 miles farther away from the takeout place. He rowed like mad to close the gap, and we stumbled upon one of our best fishing spots of the trip.

We took turns hooking powerful silvers, fresh from the salt, somersaulting as they tore backing from our eight-weight outfits while the light leaked from the 11 p.m. sky.