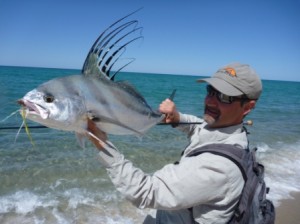 Roosterfish, with their namesake "comb" dorsal fin, have been called the Liz Hurley of sport fish. (Photo: Mike Ferris)

Cabo Pulmo, Mexico — The sun was high and hot as a group of five fly anglers stood 20 yards above the surf break on a beach north of Cabo Pulmo, Mexico, peering out into the Sea of Cortez.  “What’s that?” one of the anglers called out uncertainly, not wishing to raise a false alarm for misidentifying a rock as our quarry.  A dark torpedo coalesced in a wave that crested fifty yards offshore, joined soon after by an accomplice on each side.  Soon the fish were accelerating in formation toward the beach.  Twenty yards from the sand, one broke left, the others right.  The amassed anglers also broke ranks, racing south and north along the beach while desperately trying to not trip over the fly line they were peeling off their reels in an effort to make a successful cast to El Pappagallo – the roosterfish.

Roosterfish are a member of the jack family, and indigenous to the inshore waters of the eastern Pacific, from Baja California to Costa Rica and Peru.  Roosters can reach more than 4 feet in length and 100 pounds in weight, though 20 pound fish are most common.  Pappagallo are marked by one of the sport fishing world’s most unique dorsal fins—a series of seven long spines, its namesake rooster comb.  “Though they’re very fast and strong fighters, the greatest appeal roosterfish have is their appearance,” said Jad Donaldson, a fly fishing guide from Oregon who leads trips to Baja.  “Roosters are exotic, and I’d even say they’re sexy—and that’s not a word I use often to describe fish.  They’ve been called the Liz Hurley of sport fish.”

While roosters have long been pursued with conventional gear in deeper water off the Pacific coasts of mainland Mexico, Costa Rica and Panama, it’s on the East Cape of Baja California where roosters are in reach from the beach.  This region has become the epicenter for fly fishers seeking roosters.

The fly fishing world is perhaps not as attuned as some communities (say Justin Bieber’s fan base) to the vicissitudes of YouTube.  Yet the rising popularity of chasing roosterfish can be greatly attributed to a short film by Felt Sole Media called “Running Down the Man.”  The film chronicles the exploits of brothers Frank and William Smethurst as they set out to smash the hypothesis posited by many peers that roosterfish couldn’t be caught on a fly rod.  Much of the action involves Frank and Bill wind-sprinting up and down the beach in pursuit of their prey…and occasionally hooking and landing them.  Five minute snippets of the film posted on YouTube have gone wildly viral — at least by angling standards – and have fostered a new fishery with a decidedly aerobic twist.

A day of roosterfishing on the East Cape  means a day on the beach – walking, riding an ATV or sitting – depending on your preference.  “Fishing for roosters is all sight fishing, and you need the sun high in the sky,” said Bill White, proprietor of Cabo Pulmo Eco Palapa, an ecolodge catering to the East Cape’s  fly fishing turistas.  “Some people will roam the beaches searching for fish on the move, but others opt to find a spot with good visibility, and wait for the fish to arrive.  The biggest fish we caught in 2009 was by an angler who sat in one spot all day…by  a cooler of beer!”

Sometimes the fish are spotted coming out of the deeper water toward the beach; others, the roosters appear in the trough where waves break on the beach, just a few feet from shore.  Once the fish come in to hunt or coral baitfish, the workout begins.  Roosters have excellent eyesight, and the fly – a 7” baitfish pattern called a Rasta – should be presented a bit in front of the fish, and then stripped quickly.  When the fish turns right or left, the angler needs to sprint ahead of it to make the cast—no small feat when the surf is crashing, the fly line wants to tangle around your rod butt, and the object of your desire is barreling along on a parallel course, sometimes  just 30 feet away.  (Considering that the wind is often up and in your face, anglers will claim a small victory in managing not to sink the size 2/0 hook into their scalp!)

Sometimes you’ll only get one shot before the fish retreats to the deep; sometimes you’ll get three or four, and find yourself sucking wind 150 yards up the beach from where you started your run and gun assault. On this level, the quest for roosters is the fly fishing equivalent of the Olympic biathlon event, where competitors cross-country ski from target to target, pausing briefly to take aim at the bullseye.

Having not wind-sprinted since my high school hockey days some 30 years distant, I found myself bent over breathless (but not quite in need of resuscitation) after a few rooster dashes.  My efforts were not completely unrewarded.  Several times, smallish roosters (in the ten pound class) followed the fly nearly to my feet before turning away.  On another occasion, a jack crevalle darted ahead of a group of roosters intent on my Rasta and found itself fast to my ten-weight.  Though roosterless this trip, there is an upside:  I am inspired get in better shape before next summer and my next opportunity at running down the man.