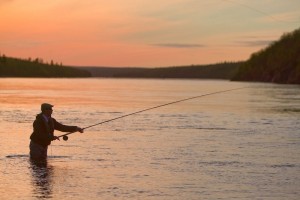 An angler unfurls a spey cast in low light on the Ponoi -- perhaps the world's most prolific Atlantic salmon river.

Through the latter part of the 20th century, the notion of catching many Atlantic Salmon in a given day’s fishing was the stuff of incredible luck—or more likely, pipe dreams.  Then anglers like Tarquin Millington-Drake discovered the Ponoi.

“I first fished the Ponoi in 1992.  The fish are extremely free-taking, especially in the spring. Catching tremendous numbers of fish was a new experience to everyone.  It made me think of Lord Hume’s description of throwing a fly into Scotland’s Tweed River from his boat to watch how his fly would swing – and watching fish come up and take the fly in the shadow of the boat.  It’s like that on the Ponoi so often, it’s embarrassing to admit it.  The fish are that plentiful, and at times, that eager.  It is great fun to show the guests who have never seen such things – to watch a fish take the fly right in front of you in fascinating.”

Situated just above the Arctic Circle on Russia’s westernmost borders, the Ponoi flows west to east, beginning on a tundra plateau in the northern climes of the Kola Peninsula and entering the Barents Sea on the east coast some 250 miles later.  The Ponoi is a big river, often averaging more than 100 yards in width, but its medium flow and shallow depth make it relatively easy to wade and fish.  Success in Atlantic salmon fishing is at least in part a numbers game, and on most river systems, the numbers are not in favor of the angler.  This is not the case on the Ponoi.  Consider the statistics cited by Tarquin:  “Last year, anglers visiting our lodge landed 13,500 fish.  I’d say that on average, each angler caught between 30 and 60 fish – and this figure includes some anglers who have limited or no fly fishing experience.  Our best week in 2003, 20 anglers brought in 1812 fish; that would be an average of more than 90 fish per angler!”

Not all the fish are MSWs, and fish don’t reach the gargantuan size of those found in Quebec or Norway (the Ponoi’s best is 30 pounds).  Still, the staggering catch rates – even with a number of grilse (immature salmon) in the mix – will leave most anglers content.  (It’s worth noting that the Ponoi also offers extremely consistent fishing throughout an 18-week season that’s longer than most; the odds of getting a “bad” week when the fish haven’t showed or conditions are unfriendly to angling are low compared to those of most other salmon destinations.  Put another way, the worst 12-year average for a week is 17 fish per rod.  Except for the rare times when cold or off-color water recommend the use of sink-tips, the Ponoi is a dry line fishery.  Anglers can fish from the boat or from shore, depending on their casting skill and preference.  Standard wet flies such as Mickey Finns, Green Highlanders or Ally’s Shrimps swung just below the surface produce excellent results.  You can also experience explosive takes skating flies (like greased Muddler Minnows); indeed, many who have fished the Ponoi consider it the best skating fly salmon river in the world.And sometimes it simply doesn’t matter what you use.  “There was a time recently when I was fishing with a few guides,” Tarquin confided, “and decided to have a bit of fun.  I had some earplugs from the helicopter ride over (from Murmansk), and impaled them on a few hooks.  Over the next few minutes, we took five fish on skated earplugs.  And that was following 12 fish we had already taken from the exact same sport…we had three on at the same time twice!”

“There’s another occasion that stands out in my mind.  There’s a set of rapids at the bottom of a run we call the Good Water.  I had a month guiding on the Good Water and as the water dropped the fish dropped back from the lip of the rapids into them  – not your typical holding water. Each day I took my guests there and parked the boat in the heart of the big water.  Waves were all around us, and I instructed my anglers to start casting.  They thought I was crazy.  Moments later, they were into the first of many fish, including one of 25 pounds.  The fight of those fish as we followed them down through the rapids was amazing.  Some we landed and others simply ran off into the distance and broke us!”

Salmon anglers seeking quietude will appreciate the Ponoi experience.  The Ponoi River Camp is a 2 hour helicopter ride into the wilderness.  There are no roads, and 20 guests share 50 miles of water with the occasional reindeer and falcons – plus a home pool by the lodge that gives up many salmon each week for the die-hard fly fisher who wishes to cast through the “white night.”  Be sure to bring bug repellent; from early July through early August, numbers of mosquitoes are present on the tundra.

Isolation does not mean an absence of jubilation on the Ponoi.  “We’ve assembled guides from a great number of nationalities who mix well with our Russian staff,” Tarquin said.  “Guests genuinely enjoy the staff and the atmosphere of the camp.  There’s a tremendous feel-good factor.  At dinner, staff and guests are not separated.  We celebrate together, and the toasts are frequent and heartfelt.”  Catch statistics are not the only validation of a great salmon river, yet the results anglers have seen on the Ponoi seem to promise a place for this river in Atlantic salmon fishing lore.  “On the Ponoi, our best days are not behind us,” Tarquin said.  “We’re still looking forward.  It’s fun to be part of creating history.”

Tarquin Millington-Drake first fished the Ponoi in 1992 and enjoyed many seasons as a representative for Frontiers International Travel before taking over as Manager and President of the Ponoi River Company in 1999. Born in Australia but living in the UK, Tarquin has fished extensively all over the world, particularly for Atlantic salmon. He guided and managed the camp in 1999 and 2000, overseeing current manager Roddy Hall’s training.  He has fished for Atlantic salmon in Canada as well as extensively in Scotland, Iceland, Russia and Norway. He has also fished Mexico, Bahamas, Venezuela, Argentina, Chile, Christmas Island, Seychelles, New Zealand, USA, Canadian steelhead, Alaska, Belize, Mongolia, UK, Costa Rica.