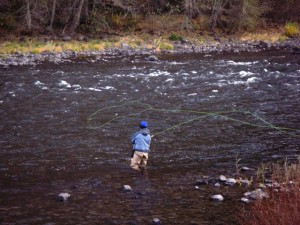 An angler on Oregon's Grande Ronde River unleashes a long cast with a spey rod.

Steelhead trout, like Atlantic salmon, have been described as ‘the fish of a thousand casts.’  On the larger steelhead rivers of the Pacific Northwest and British Columbia – the Deschutes, Skagit and Bulkley among others – hooking a steelhead on a fly may require a thousand very long casts.  After all, the longer your cast the more water you can cover, and the better chance you have of a fish actually seeing your fly.

To achieve consistently long casts over a long day of casting, many steelhead fly anglers have taken up longer two-handed rods, and a method called spey casting.  Where traditional single-handed fly casting requires the angler to make a back cast or multiple back casts – the billowing loops of line so artfully filmed in A River Runs Through It — to accelerate the fly line forward, spey casting does not necessitate a back cast.  Instead, the angler uses the tension of the water to harness the power of the rod (or “load the rod” in the casting vernacular).  The longer spey rod – generally 12’ to 16’ in length – allows the angler to make what might be called an exaggerated roll cast, shooting great amounts of line through the rod’s guides to launch the fly 80, 90 or 100 feet out into the river.  Highly proficient spey casters can toss a fly nearly 200 feet; the world record spey cast is 295 feet, registered by Steve Rajeff.

Like fly fishing itself, spey casting is a British import.  “The first references to what we now call spey casting occurred in the1840s and 1850s, and referenced a style of casting on the big salmon rivers in Scotland,” said Simon Gawesworth, one of the world’s pre-eminent spey casting instructors.  “On the River Spey, trees and brush extend right to the bank, and the river is wide and powerful, making it difficult to wade out far enough to have room to make a back cast.  Once you visit the Spey, you can understand why the style of casting evolved there.”  At that time, two-handed rods were 18 feet (or more) in length; and were often hewn from ash; managing one of these rods was not unlike wielding a tree branch.  Even 20 years ago, two-handed rods were ungainly beasts.  “When I was introduced to spey casting, the weapon of choice was the Double-Built Palakona manufactured by Hardy,” Gawesworth continued.  “It was 18 feet long, had two layers of split cane, and steel shaft in the middle.  It weighed 54 ounces.  It was a rod for real men.  I remember being bemused and baffled at the time that people would even want to use these rods.  But when it came to Atlantic salmon fishing in the United Kingdom or Scandinavia, anglers wouldn’t go to the river without a two-handed rod.  That’s still true today, though the rods have greatly improved.  Today, a 15’ graphite rod on the heavier side of the scale is ten ounces, a real pleasure to cast.  With the advent of some of the heavily weighted spey lines now available, I can have a newcomer throwing a line 70 feet with 15 minutes of instruction.”  Nearly every major fly rod manufacturer now has a two-handed rod in its offering, ranging from 11’ rods for 5-weight lines to longer, stouter steelhead/salmon rods.

After being introduced to spey casting by a fishing guide and fly shop owner named Mark Bachmann, I was a quick convert.  With the two-handed rod, I can easily make casts far longer than I could ever hope for with my single-handed 9’ rod, and I can do so with less effort – especially with the heavy sink-tips that are necessary to reach fish during the winter months.  Just as important, I can control my fly line much better with the two-handed rod, throwing large mends upstream or downstream to slow down or accelerate the fly, depending on the situation.  After acquiring my first two-handed rod, I proselytized the benefits of the spey experience to my single-handed brethren, quickly winning several converts (after out-fishing them).

I soon learned that I was not alone in my zealotry.  There are a number of Internet sites devoted to the joys and challenges of spey casting with two-handed rods.  For those interested in more of a hands-on interaction with fellow spey enthusiasts, there’s the Sandy River Spey Clave, held the first weekend in May along the banks of the Sandy in Oxbow Park, east of Portland.  The two-day festivities include how-to seminars conducted by some of the world’s leading spey casting authorities (including George Cook, Dec Hogan, Andy Murray and Andre Scholz), and the opportunity to demo the latest equipment.  The Spey Clave was first organized in 2001 by Mark Bachmann.  “There was a group of local anglers who wanted to know more about spey casting and fishing with two-handed rods,” Bachmann recalled.  “The first year, we had about 50 people in attendance, the next year 300.  Last May, we had over 1,000 anglers over the weekend, with some coming from as far away as South Africa.”

At last year’s Spey Clave, knots of anglers chatted as others took turns casting rods from a veritable forest of graphite provided by manufacturers, on the grass of a picnic ground that served as the event’s staging area.  Nearby, a makeshift kitchen served up free hot dogs and chili.  The real action was down on the river, where a procession of presenters demonstrated a host of techniques, from “Snap-Ts” to “Snake Rolls,” to hundreds of onlookers.  Most looked on with quiet awe as caster after caster easily landed their fly on the opposite bank, some 120 feet away.

“One thing I love about the Spey Clave is that everyone leaves any sense of competition at the gate,” Bachmann continued.  “It’s a gathering where anybody – whether they’re a newcomer or an old hand – can get free advice from the best spey casters in the world.”