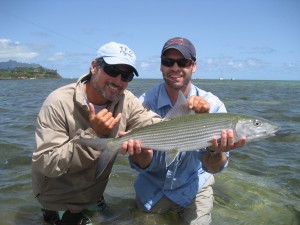 Angler Mike Rosato (right) and guide Mike Hennessey pose with an Oahu bonefish that tilted the scales at just under ten pounds.

For flats fishing aficionados, Hawaii is not the first (or even third) place that springs to mind.  That’s because there simply aren’t many stretches of shallow water, places where bonefish come out to play on waxing and waning tides.  That’s too bad, as the waters here are home to monster fish, with many eclipsing ten and even approaching fifteen pounds – fish several multiples of those regularly encountered in bonefish hot spots like Ascension Bay and Belize.

The island of Oahu is an exception to the rule understood by most fly anglers that “there isn’t any flats fishing in Hawaii.”  On a recent trip to the island, I watched dumbfounded as Captain Mike Hennessy (www.hawaiionthefly.com) led anglers to pancake flats scattered around Kaneohe Bay on the island’s east side, where tails more resembling salmon than any bonefish I’d ever encountered waved in the air.  On one late afternoon in the shadows of Honolulu’s warehouse district, I witnessed a spectacle that will haunt me forever – a flat festooned with tailing fish, nearly all between six and ten pounds.  From time to time, a bone nosing about for a meal would tumble over with a loud splash, seemingly unable to support its own weight.

The bonefish of Oahu don’t reach their absurd size by being pushovers.  To fool these fish, a perfect cast is only the beginning.  The right fly (these fish seem equally likely to take baitfish or crab patterns as they are to grab shrimp imitations) and the right retrieve (slower than I’m used to) are essential for success.  I didn’t have the magic.  But angler Mike Rosato, visiting from Seattle, did.  As a fish flashed in front of Captain Mike’s boat, angler Mike dropped a lizard fish imitation to the fish’s right, and the fish engulfed it – and then was off to the races.  It’s first run took 150 yards of backing off Mike’s reel, and dangerously close to a coral reef (a nice fish had been lost earlier in the day to the reef; cut leaders are a frequent problem).  “Stop him!” Captain Mike cried, and angler Mike cranked the drag down and turned the fish back.  Ten minutes later, the biggest bonefish I’d ever seen close-up was at the boat.  The “de-liar” showed it to be just a few ounces under ten pounds.  A fish of a lifetime, and one that will inspire me to return to Oahu someday, 8-weight in hand.