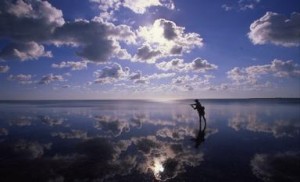 Casting at dawn for tailing bonefish on Andros Island.

The rich lore of bonefishing on North Andros pulls almost as powerfully as the present possibilities of the island’s endless flats.  North Andros served as an incubator for nascent grey ghost fly fishing efforts half a century ago, and was home to the Bang Bang Club and the Lighthouse Club – two of the earliest bonefish lodges.  Wall Street Brahmin sailed south on their yachts to hire Bahamians to help them hunt elusive bones, and the angling literati of the day – Lee Wulff, Joe Brooks and the like – followed closely on their heels.  The fishery has stood the test of time.  (And remnants of the past are returning; Charlie Smith, creator of the Bonefish Charlie fly, has abetted the reincarnation of the long defunct Bang Bang Club.)  And despite North Andros’ iconic place on the world list of bonefishing hotspots, it’s still quite possible to find a stretch of flats to enjoy by yourself.

Andros Island is the largest of the Bahamas Islands, measuring 100 miles long by 40 miles wide, and is divided into three smaller islands, North, Middle and South Andros.  Each island is separated by a bight – a broad channel, where tidal waters ebb and flow.  Where the North Bight merges with the Middle, hundreds of flats have been formed,  a veritable tropical paradise.  On the northern end of the island you’ll find Joulters’ Cays, 20 more miles of bonefish flats.  To the west lies a vast wilderness area, where flats and creeks are rarely fished, let alone named.  All told, Andros offers more fishable bonefish flats than any region of the Caribbean.  The predictability of the fish’s routines lets anglers (more accurately, their guides) target their preference – lots of smaller fish or shots at big fish.

The bonefish of Andros are legendary for their great size.  In his wonderful book Bonefishing!, bonefish pioneer Randall Kaufmann says of the Middle Bight and the west coast, “Anglers tell of getting 15-pound, even 20-pound bonefish to eat their fly and setting up hard on them four or five times before the fish just spit out the hook.  They talk about losing fly line and 250 yards of backing on the first run…”

While the revamped Bang Bang Club and several other lodges stand at your service, the adventurous Brian O’Keefe prefers to travel a la carte.  “We use Nicholls Town as our base.  It’s a small place with a few hotels, a great pub called The Big Shop that looks like Hollywood’s idea of a Bahamian pub, and a little grilled fish place – the Sly Fox, where you can get a conch salad that’s just unbelievable. The places we stay are pretty basic but clean and friendly.  We’re not in the room too much.”  On a typical day, Brian will have a fruit plate for breakfast, put on his wading booties and fanny pack, and meet up with his favorite guide – a fellow named Philip Rolle – and discuss options.  These are generally dictated by the weather.  If it’s calm, they’ll run over to west Andros.  It’s about an hour and half, but very worthwhile.  It’s a saltwater wilderness; the west side is uninhabited, so you won’t see any development over there, and not many other boats.  On west Andros, they’ll focus on bones and tarpon. Jacks, snapper, and barracuda are also available in the deep water cuts.  A floating line covers all situations here well.  “The beauty is, you never know what will happen next,” Brian continued.  “We might see 150 pound tarpon rolling, or baby tarpon in the 20-pound class.  Almost every flat has bonefish.  It’s constant action and constant variety.”

If the weather is breezy, Brian and Phillip will probably do a standard bonefish trip to the Joulters’.  Joulters’ consists of a smattering of low sandy islands, and a long string of flats, all wadeable.  The boat is used to get from spot A to spot B; most of the fishing is done from the flats.  “At Joulters, we work the tides to our advantage,” Brian said.  “If we catch things right, we can get in six good fishing hours.  Phillip has an excellent sense of when and where fish are coming and going.  Some of the fish we’re casting to are in the 30” range; fish of four to five pounds are average.  During down time, we might go for shark, permit or snapper; snapper can make a great dinner.  When I’m there, I feel like a kid.  There’s always something happening.  On the way back into town, we usually try to leave time to snorkel a coral head or two.  To only fish and not get into that beautiful water seems a shame.”

In his slightly younger days, Brian passed on the motel in Nicholls Town altogether, and roughed it out on the Joulters—that is, until some uninvited guests showed up.  “We’d built  a permanment, but very bare bones camp on one of the islands.  It was like something out of Gilligan’s Island.  It was literally a five foot walk to begin fishing.  We’re there with an inflatable kayak, and little else.  One night, we heard a good deal of ruckus out in the ocean.  There was the beating of helicopters and the flashing of flares; I figured that either some big boat hit the reef, or it’s a drug bust.  We went back to sleep.  A half hour later, our camp was under attack by a Black Hawk helicopter.  Apparently, they mistook us for drug smugglers.  Everything was airborne—our kayak, our tarp, our cooking stuff.  They completely trashed our camp.  This was pretty scary.  I learned that you don’t want to mess with the D.E.A.”

Even the rather rude intrusion of the narcs can’t displace Brian’s most vivid memory of Andros.  “In the evening, the sun has an orange glow.  There are times when the tide is just right, and the bonefish spread out, and there are pods of bonefish as far as the eye can see.  There might be more than 1,000 tailing bonefish spread out over a couple miles of flats.  It shows the amazing potential of a good healthy flat.  When the bonefish tail, their tails sometimes take on the orange glow.”

Brian O’Keefe has fished and photographed the world.  His photographs have appeared in the Los Angeles Times, the New York Times ,USA Today, Men’s Journal and just about every fishing magazine you can imagine.  In addition to his photography work,, Brian has been a tackle rep for Scientific Anglers, Scott Fly Rods and Chota Wading Boots and Waders. He is also a Master Certified Fly Casting Instructor from the Fly Fishing Federation (FFF).  He recently started an online magazine called Catch that features photo essays and video footage from some of the world’s great angling destinations.

Getting There:  Andros Island is located approximately 150 miles southeast of Miami.  Visitors generally fly to Miami or Nassau, and then arrange a flight to Andros Town.  Air Charter Bahamas (866-fly-islands; www.aircharterbahamas.com) and Yellow Air Taxi  (888-YELLOW-4; www.flyyellowairtaxi.com) both provide service.

Accommodations:  While the largest island of the Bahamas chain, Andros is the least populated, and has somewhat limited accommodations.  Green Windows Inn (242-329-2194) in Nicholl’s Town offers decent motel-style digs.  For a more comprehensive list of hotels and lodges, visit www.bahamas.com/islands/andros/index.html.

Equipment:  For Andros bonefish, you’ll want a 9’ 7- or 8-weight rod equipped with floating line and a minimum of 150 yards of backing.  9’ leaders tapered to Ox with tippet in 8 to 12 pound test will do fine.  Standard bonefish flies produce well, including Crazy Charlies, Clouser Deep Minnows, Gotchas and Brown Snapping Shrimp, in #2-#8.  For tarpon and permit, load up with a 9’ 9- or 10-weight rod.  Have floating line for permit, intermediate and fast-sinking lines for tarpon, all outfitted with at least 200 yards of backing.  For permit, you’ll need a 9’ leader ending in 15 pound tippet; for tarpon, the same set-up, plus an 80 pound shock tippet.  Decievers, Black Death and Cockroach patterns in #1/0 -#3/0 work for tarpon.  McCrab, Del’s Permit Crab and Expoxy flies are good permit choices.  Brian’s favorite guide, Phillip Rolle, can be booked through Mark Summers at 800-694-4162.