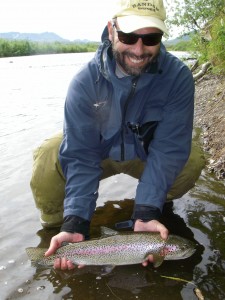 A fine "leopard rainbow" from the Kanektok, one of the famed rivers flowing into Bristol Bay.

The Bristol Bay area of Alaska, two hundred miles southwest of Anchorage, offers some of the greatest fresh water fishing diversity available anywhere.  During the short Alaska summer, visitors can anticipate tussles with one or more species of Pacific salmon (what you’ll catch depends on when you visit), rainbow trout, grayling, arctic char, resident and sea-run Dolly Vardens, pike and lake trout.  The fisheries vary from bigger rivers like the Togiak, Nushagak and Wood to lakes like the Nuyukuk and Tikchik to countless unnamed creeks.  Three mountain ranges – the Kilbuck Mountains, Taylor Mountains and the Aleutian Range – and abundant wildlife (including brown bear, moose, and caribou) provide the classic Alaska backdrop that visitors anticipate.

Leon Gorman timed his Bristol Bay adventure to coincide with the region’s prolific runs of silver salmon run.  He came away more impressed with the big rainbows he encountered on a small tundra stream.

“One day, we flew out to this little stream – in places it wasn’t more than 12 feet wide. The stream was a long series of oxbows, about a mile in length.  The strategy was simple: we’d kneel down to keep a low profile and cast downstream to where the Oxbow looped.  We were using huge muddlers to simulate a dead mouse.  The current would take the fly around the oxbow and out of sight.  A second later, the water would explode, and you’d have a big rainbow on.  There was quite a ruckus in that little stream when the fish came on.  The fish would be all over the place.  In a couple of hours, I got three rainbows that exceeded ten pounds, each.  There was a lot of anticipation as the fly drifted around the corner.  I had to remind myself to look over my shoulder now and again to keep a look out for bears!”

Trophy rainbows are certainly a major attraction of the Bristol Bay region, and the Auglapak, Agulawok and Alagnak are prime venues. In the early season, fish focus on salmon smolt, augmenting their diet with the occasional mouse or vole, and sporadic insect hatches (attractor patterns will generally suffice).  When salmon begin returning and spawning ensues, the ‘bows become more single-minded, gorging on eggs.  After spawning is completed, they will dine on drifting salmon flesh, making flesh flies the preferred pattern.  Not quite as elegant as dapping dainty duns, but a small compromise for some very big fish!

Variety is the spice of life during a stay at one of Bristol Bay’s many lodges, and the fishing program is set up to accommodate a spectrum of experiences.  Most fishing days begin with a brief jaunt in a float plane, and perhaps a jetboat ride. Want to battle some very big fish?  Visit in June, pop over to the Togiak or Rainbow River, and rig up your 10-weight with a high density sink tip for Chinook salmon that can reach 50 pounds.  (Sometimes, floating line and an indicator will do the trick.)  Want to switch gears completely?  Grab a 4 or 5-weight and a handful of dry flies, and head over to the Agulawok or Upper Nushagak for grayling, which are tremendous light-tackle sport.  Feel like a break from salmonids?  How about pike on Lake Beverly or Tikchik Lake?  The northerns will eagerly take popping bugs and other flies stripped along the surface, and go to 15 pounds.

Thanks to the abundance of arctic char that gather at lake mouths to intercept salmon smolt making their way to the Pacific, one can catch their lunch and continue fishing until the char has been prepared to your liking.

While Bristol Bay’s aggressive rainbows proved a greater challenge for Leon’s group, the fast and furious silver fishing they experienced provided some memorable moments.  “At one point, four of us were strung out along a sandbar, casting over a school of incoming silvers.  I was furthest downstream.  As I followed my fly on its swing, I saw a fly line drifting by; a fish had separated the fly line from my friend’s backing, and was heading downstream.  I grabbed the line with the fish still attached, and walked it back up the bar to my friend.  Together, we managed to get the line attached back to the backing.  Eventually, he landed the fish.”

No Bristol Bay angling adventure is quite complete without a bear story, and Leon’s trip did not disappoint.  “We were flying out to fish one day, and came upon a grizzly.  The pilot flew down for a closer look.  The bear got up on his hind legs shook his paws at us, as if he were ready for a fight.  It was wonderful to see such a great animal.  Though I have to say that I was glad we encountered him from the plane, rather than on that little tundra stream where we got the big rainbows.”

Leon Gorman, grandson of L.L. Bean, currently serves as Chairman of the Board of L.L. Bean, Inc.  Leon and his wife Lisa have championed a number of conservation programs in Maine and nationally.  Among those are the effort to preserve the St. John River in northern Maine; establishing a marine resource education center at Bowdoin College, his alma mater; and supporting the Appalachian Mountain Club.  Under Leon’s leadership, L.L. Bean has established itself as an environmentally responsible company whose support has included nearly $3 million in the last five years to conversation organizations.  Leon has fished in Montana, New Brunswick, Labrador, Belize and elsewhere, but Maine remains his favorite.

Prime Time:  The drainages of the Bristol Bay area are open from mid-May through the end of September.  Freshwater species (rainbows, grayling, char, pike) are available throughout the year, with the largest rainbows taken in June, July and September.  Salmon rotate through the systems as follows:  Chinook (King) and Chum in June, Sockeye (Red) and Pinks (Humpy) in July, and Silvers in August and September.

Getting There:  You’ll need to get to Dillingham, Alaska, where you’ll be transferred to either a jetboat or float plane to deliver you to your lodge. Commercial flights to Dillingham are available from Anchorage via Alaska Airlines; visitors will often overnight on Friday in Anchorage and take an early morning flight to Dillingham.
Accommodations:  Some of Alaska’s most storied lodges serve the Bristol Bay region.  Two perennial favorites are Bristol Bay Lodge (509-964 2094; www.bristolbaylodge.com) and Tikchik Narrows Lodge (907-243-8450; www.tikchiklodge.com).   Bristol Bay Lodge overlooks Aleknagik Lake and can accommodate up to 22 anglers.  Tikchik Narrows is situated on a narrow peninsula which separates Tikchik and Nuyukuk Lakes, and can likewise handle 22 anglers.  Both lodges offer excellent food, nearby and fly-out fishing, and both carry a price tag of $7,350 for a week’s visit, based on double occupancy.  (NOTE:  Bristol Bay Lodge guests spend two nights away from the main lodge at riverside outpost camps.)

Equipment:   Bristol Bay region rainbows can get quite big, and you’ll want to prepare for that eventuality.  While a 9’ 5-weight might do, a 6- or 7-weight is probably better.  Most fishing is done with floating line, but bring a few sink-tips in case of high water.  A modest selection of dry fly patterns – Adams, PMD, Elk Hair Caddis, Blue-Winged Olive, Light and Dark Cahill, Quill Gordon, Royal Wulf and Royal Trude – will cover any hatches.  An assortment of bead head nymphs, egg patterns, muddler minnows, wooly buggers, egg-sucking leeches, flesh flies and deer hair mice will round out your offerings.  Match a salmon rig to the fish that will be present; most anglers prefer a 9- or 10-weight for Kings, an 8-weight for silvers and chum, and a 7-weight for sockeyes and pinks.  Bring both floating a sink-tip lines; your guides will have favorite flies for each species.