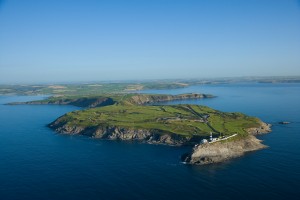 The site of Old Head was once used to pasture sheep, though the former owner claimed to have lost members of his flock over the edge.

The Old Head of Kinsale is a startling peninsula that extends some two miles out into the Celtic Sea from near the bottom of Ireland.  On the morning of May 7, 1915, Old Head played small, sad role in World War I history; roughly eight miles off the peninsula, a German U-boat torpedoed the ocean liner Lusitania, which sank, taking the lives of 1,198 passengers and crew.  Drownings still occur daily from April through September, but the fatalities are merely Titleists and Nikes.

And no one seems to mind.

“Old Head is a special place, indeed one of my favorite places,” Keith Baxter began.  “It’s so exposed to the winds off sea that they have to close it in the winter, as it’s unplayable.  It’s one of the more expensive rounds you’ll play anywhere at €295 – certainly the most expensive in Ireland.  But if you’re willing to dig very deep to do it once in your lifetime, you’ll never forget it.  I first visited a year after it opened (1997), while I was working for a large food retailer in England.  One of my suppliers had a manufacturing plant in Cork.  I convinced them that it would be a grand idea to get a corporate membership at Old Head – that way they could take me out there whenever I visited!”

Described alternately as a diamond, a heart or a swollen thumb, Old Head was once the site of castles, churches and the dwellings of medieval monks; ruins of these ancient edifices are scattered throughout the property’s 220 acres.  (One such relic is the Stone of Accord, a circular stone with a small hole in the center; married couples and tradesmen would link their fingers through the hole to renew their banns or business contracts.)  An exclamation point on this remarkable promontory is the Old Head of Kinsale Lighthouse, which has been helping to steer seafarers clear of County Cork since the 1840s.

Before its transformation to a golf course began, the Old Head was used as grazing land for cattle and sheep.  The land was sold to Irish-American financiers John and Patrick O’Connor in 1989, who were able to envision a golf course on this rock-ribbed terrain; rumors circulated at the time that the land was sold in part because the farmer was tired of losing livestock off the cliffs!  Building the course was no small feat, as thousands of tons of rock had to be carted away and tons of topsoil brought in.   Instead of importing a star designer, the O’Connors assembled an architectural team that mixed local playing talent and solid design resumes.  It included the late Eddie Hackett, an Irish golf pro and designer; Ron Kirby, an alum of Jack Nicklaus design; Liam Higgins, an Irish player active on the Champions Tour; Paddy Merrigan, an Australian architect; the late Dr. Joe Carr, Ireland’s most successful international amateur player; and the construction leader, Haulie O’Shea.  With the piece of land they had to work with, the O’Connors may have felt that Old Head hardly needed the drawing power of a big name designer.

Whatever the case, they were right.

“It is without a doubt one of the most exhilarating sites in the world where golf is played,” Keith continued.  “You feel as though you are on the edge of the world out there.  If you have any vertigo, you could be in trouble.  You play right by cliff edges where it’s 250 feet down to the water.  There are seagulls flying below you, and waves crashing.  The waves reverberate in the many caves that dot the bottom of the headland, making a great booming noise.  Your trousers are flapping in the wind.  It’s a total sensory experience.”

While the most casual duffer whose experience of seaside golf is limited to a lakeside driving range would find it difficult to completely ruin the playing possibilities of Old Head, the O’Connors’ design team did a fine job of getting the most from the site.   The par 72 layout has eight par 4s, five par 3s and five par 5s, with nine of the holes along the cliffsides — and the roiling Celtic Sea in sight from every stance (save from the depths of a bunker or two).  Visitors have the opportunity to slice or hook the ball into the water while advancing north or south along the headland; even if you’re hitting it unerringly straight, you may be unable to resist the temptation to tee up a tired ball on the 18th and take a swing toward Wales.  “The back tee is perched up near the lighthouse at the very edge of the headlands,” Keith added.  “It’s imperative to have a go and watch the ball soar!”

There are many descriptives for Old Head, almost all of them from the golfing community superlative and positive. (There has been some controversy regarding curtailed non-golfer access to the headland, and the O’Connors have certainly made some enemies.)  “For me, the best holes are those that hug the cliff edges,” Keith opined.  “They have a real ‘wow’ factor.  The holes in the interior are a bit of a respite – a chance to catch your breath and make a few good scores.  Despite the absence of dizzying cliffs, they’re still thoughtful holes.  Though many may think of Old Head as a links course because of its proximity to the ocean, Old Head is not a true links.  It’s not built on sand, there aren’t large sand dunes on the property, nor is the sea lapping gently within touching distance.  That’s not to say that some holes don’t have a links feel.  The course has another special touch—standing stones are used as markers.  You take aim at the stones on every hole.”

Of the many memorable holes at Old Head, the two par-5s on the back stand out for most players.  For Keith, it’s the 564-yard 12th, named Courcean Stage.  “This is when Old Head truly comes to life for me,” he said.  “It’s so rugged, so wild, so wind-swept, a visual feast bar none.  You feel like you’re on the end of the earth.”  The 12th rambles out on a finger of cliff that extends out into the water.  You’re tempted to cut off a few yards on your drive by playing to the left side of the fairway, but any miscalculations will put you with the fishes.  (You’d do well to think twice about searching for wayward shots; signs along the left rough in bright yellow bear the following warning:  “You are strictly prohibited from proceeding beyond hazard lines.”)  As you head further out onto the peninsula, the cliff top narrows, along with the fairway.  Suffice it to say, making a five on this hole is special.

Keith Baxter is the author of The Top 100 Courses of the British Isles and The Golfer’s Notebook.  He’s also the editor and managing director of the Top 100 Courses of the World website (www.top100golfcourses.co.uk).  He’s played more than 1,000 different courses worldwide and more than 80 of the Top 100 in Britain and Ireland.  Keith is a member of the International Golf Travel Writers Association and his home course is Bovey Castle.

Getting There:  Old Head is located 30 minutes from Cork International Airport, which is served by Aer Lingus (800-IRISH AIR; www.aerlingus.com) from the United States (via Dublin).

Course Information:  Old Head plays 7,159 yards from the black tees to a par 72.  Green fees are €295 for 18 holes, €490 for 36 holes.  Carts are available, though the course operates an extensive caddie program and encourages walking.

(from Fifty More Places To Play Golf Before You Die)