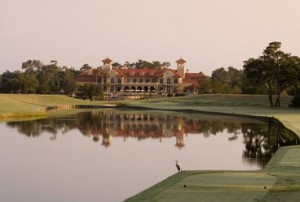 A view of the clubhouse at TPC Sawgrass.

The concept of the Stadium Course at the Tournament Players Club at Sawgrass belongs to former Professional Golf Association Tour Commissioner Deane Beman.  “The PGA Tour wanted their own tournament at their own venue,” Alice Dye recalled.  “Deane wanted a permanent venue that would essentially serve as the site for a fifth major.  He wanted each green to have four plateaus for four different pin placements.  The placements would shift for each day of the tourney.”  Beman also envisioned a course that would be designed with the spectator, as well as the player in mind.  The layout would need to give fans good vantage points of the action.  Lastly, the course would have to be open to the public, so average Joes and Josephines could test their mettle against the same course that their heroes played.  (At the time of TPC’s construction in 1980, most tournaments were held at private clubs.)

Deane Beman was the enabler of the TPC concept, but it’s Pete Dye’s wicked genius that’s made the Stadium Course at Sawgrass so memorable.  Many who’ve played TPC Sawgrass—including some of the pros—place this course among his most “dyeabolical” designs.  “Professionals who play on the PGA Tour get to know the courses that are regular stops pretty well,” Alice continued.  “They have a good sense of where they need to place a shot on the green to get the ball close to the pin.   When they come to a new course, they don’t know exactly where to play their shots.  In this respect, a new course is something of an equalizer.  When the first tournaments were staged at TPC Sawgrass, some of the pros complained bitterly that the course was too hard.  But a lot of it had to do with knowing where to hit approach shots on those small greens to stop the ball for the various pin placements.  Raymond Floyd was one of the first pros to play the course, and Pete went around with him and told him where to play his shots.  Ray shot a 68, but finished the 18th with a 7 when Pete did not tell him where to hit the ball.  To do well at TPC, you’ve got to be making good shots.  It’s not the kind of course where you can get away by making lots of putts, because that generally won’t happen.   The course sifts the poorer players out, and the professionals appreciate that.   The same people who criticized it came to love it.”

Like so many Pete and Alice Dye designs, TPC at Sawgrass is not bone-crushingly long, nor unreasonably punitive … that is, if the player is using his head.  Strategic thinking is paramount, with execution a close second; some would suggest that a grounded psyche trumps all considerations on the Stadium Course, as the layout can certainly play games with your head.  (One is inclined to wonder if this mastery of psychological manipulation is something that Dye honed in his earlier career as an insurance salesman!)   The 529-yard par-5 11th typifies the range of possibilities that are available on many holes at TPC.  Very strong players capable of connecting two very strong shots can play the left side of the fairway, though the second shot must be high enough to clear an oak tree and must fly two  immense bunkers that run much of the second half the hole.  Most players find themselves laying up with their second shot to the right, where another imposing oak tree can block your approach if the lay up shot is less than precise.

The 17th hole at Sawgrass—that tiny little 132-yard par-3 with the island green—has made the first TPC course recognizable to almost every golfer, even those who only frequent miniature golf courses.  Some architectural purists dismissed it as a novelty.  Many course designers have since mimicked it.  “The island hole was so unique, so different, no one even complained about it,” Alice said.  “It should have been the most controversial hole on the course, but I don’t think anyone knew what to say.  Number 17 certainly got Sawgrass a lot of attention early on.”

Considering 17’s notoriety, it’s interesting to note that the island green was really an afterthought, albeit a brilliant afterthought.  “We knew that 17 was going to be a short par-3,” Alice continued, “and the original plan was to have a water hazard on the right side.  However, there was good sand around the site of where we thought the green would be, and such good material was at a premium on the site, which was quite swampy.  We kept digging and digging this sand out – mostly for the 15 and 16th holes.  Eventually, there was a hole where the green was going to be.  Pete wasn’t sure what he was going to do, and I suggested that we make an island green.”

Though it is but a pitch shot for many players, the 17th has been proven a source of great consternation for tour player and tyro alike.  At 50 feet wide across the front, 87 feet wide across the back and 90 feet deep, the green is not insurmountably tiny.  Yet when such a green is surrounded by shimmering blue—and there’s a million dollars on the line—it can seem the size of postage stamp.  One year when uncommonly high winds made club selection trickier than usual, 64 balls found the pond during the opening round of the Players Championship; this is a statistic that every once-a-week duffer can relish with glee.  It’s estimated that in the course of a year, over 120,000 balls find the pond, making it a favorite swimming hole for the breed of men who make their living salvaging golf balls from water hazards.

When asked for a bit of advice that would prove beneficial to those playing Sawgrass during the 51 weeks when the Tournament Players Championship is not being staged, Alice Dye didn’t hesitate for a moment.  “I wish that when people play Sawgrass, that they’d play the tee that they play at home.  A lot of men come out here and feel like they have to play from where the pros play to get the full experience.  The reality is that when an average guy plays from the back tees, he ends up playing woman’s golf – two woods and a chip on to the green.  It kills the spirit of most of the holes, and kills the fun, too.  They don’t realize that when they play from the proper tee, they actually get to play the course the way the pros play it.”

Alice Dye has been involved with golf most of her life.  She has won 50 Amateur Championships, including nine state championships in Indian, two USGA Senior and two Canadian Senior Tournaments.  As a leader in  golf, Alice has served on the USGA Women’s Committee, the LPGA Advisory Council, was the first woman president of the American Society of Golf Course Architects, and the first woman to serve as an Independent Director of the PGA of America.  As an architect, Alice worked with her husband Pete to co-design P.G.A. West in La Quinta, CA; The Ocean Course in Kiawah, SC; Harbour Town Golf Links in Hilton Head, SC; Crooked Stick Golf Club in Carmel, IN; and Teeth of the Dog in La Romana, Dominican Republic.  Alice has received numerous awards, including honors from The Indiana Hall of Fame, The Red Coat of Fort Wayne, and the Don Rossi Award for Lifetime Contributions to Golf.  She served as Captain of the 1992 Women’s World Cup.

Getting There:  TPC Sawgrass is roughly 35 miles south of the Jacksonville International Airport, which is served by most major carriers.

Course Information:  The Stadium Course at TPC Sawgrass is par-72 and plays 6,954 yards from the championship tees. The course is open to guests at the Marriott at Sawgrass (see below).  Green fees for the Stadium Course  vary depending on when you visit.   Visit www.tpc.com for more details.

Accommodations:  Most visitors hoping to play the Stadium Course at TPC Sawgrass stay at the Marriott at Sawgrass(800-457-4653; www.sawgrassmarriott.com), as guests get access to the course.  Golf packages, which include resort accommodations, green fees, cart fees, and breakfast begin at as little as $190 per person/per night based on double occupancy.