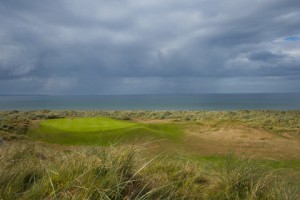 The second hole at Enniscrone, a 556-yard par-5 that concludes at a seaside green.

There is always much excited whispering in golf travel circles about the newest hidden gem, the latest undiscovered destination that’s on the cusp of being discovered.  Ireland hardly qualifies for this designation.  As golf travel to Scotland exploded in the 1990s, savvy golf travelers began to explore and appreciate the many classic links of the Emerald Isle – and the relative affordability of Irish golf travel.

With the 20th century drawing to a close,  Ireland’s economy enjoyed a tremendous surge, transforming the country from one of Europe’s poorer nations to a position among its wealthier members.  And Americans now flock in droves to play Waterville, Ballybunion and Lahinch – and to plunk down green fees approaching $500 to play Old Head.

You might say that Ireland is the new Scotland.

But as the Highlands Region of Scotland has been insulated from the minibus masses of conquering eightsomes by its remoteness, so the northwest of Ireland has been spared both the onslaught of visitors, and the subsequent homogenization of experience that can result from catering to too many said visitors.  “When you’re this far removed from the tourist centers, you get a taste of the real Ireland,” golf travel expert Brian McCallen has said.  “Up in County Sligo and County Mayo, it’s not all lace curtains and statues of leprechauns.  Better yet, the courses here are all incredible, underplayed, and priced well below other big-name venues.  I would group the assembly of courses here with any group of golf courses anywhere.”  The greater known among the lesser-knowns (to paraphrase a former U.S. Secretary of Defense) include County Sligo Golf Club at Rosses Point, Ballyliffin and Carne.  One that you may not have heard of, but will almost surely be hearing more about, is Enniscrone.

“I was on my honeymoon in Ireland with my wife Melanie,” John Steinbach began.  “We were staying at an inn in Ballycastle (County Mayo) that’s owned by an old friend of mine, Terry McSweeney.  I’d heard about Enniscrone from some of my Taylormade colleagues in Europe, and Terry noted that it was only 40 minutes away, so we made the trip.   Everyone at the clubhouse was very accommodating – that’s something I’ve always found wherever I’ve played in Ireland.  We engaged a caddie named Eddie – as colorful a character as you’d hope to find, with a sparkle in his eye and a few missing teeth – and  off we went.  The first hole is very flat and straight.  It resembled a driving range, and I was wondering what all the fuss was about this so-called hidden gem.  But the second hole takes you off into the dunes, and from there on it’s a whole different story.”  (Getting to Enniscrone, it should be noted, is part of the course’s challenge.  The width of the roads in this part of Ireland seem better suited to skateboards than automobiles, and the posted speed limits seem too fast by at least half.  To further complicate matters, many maps and roadsigns use the Gaelic spelling of the town, Inishcrone.  If you see signs for Inishcrone, know you are getting close!)

Enniscrone rests in the southwest corner of County Sligo, just south of the town of the same name, overlooking Killala Bay.  Like so many golf clubs here and in neighboring Great Britain, Enniscrone has a long history, and reached its current incarnation in fits and starts.  A golf club was formed in Enniscrone in 1918, and competitions were held at three different locales on casually laid out tracks around town through the 20s.  Nine holes were laid out in town in 1930 and Enniscrone had a formal home, where the fairways were maintained by a horse-drawn mower.  The club’s membership waxed and waned over the next 40 years, but by the early 70s, interest (and resources) had increased enough to allow the club to lease land in the dunes on the mainland and retain Eddie Hackett, Ireland’s most celebrated architect, to create a championship level 18-hole links.  Hackett’s best known layout is Waterville in County Kerry, but he cut a wide swath in the northwest, laying out Ceann Sibeal (on the Dingle Peninsula), Carne (on Belmullet Peninsula), Donegal and Rosapenna in addition to Enniscrone.  All in all, Hackett had his hand in 85 original designs and remodels, all in Ireland; that he’s not better known outside of Ireland is not testament to his talent, but a function of his mild-mannered and self-effacing nature.

Eddie Hackett’s reimagined Enniscrone was unveiled in 1974 to near universal acclaim (a least across Counties Sligo and Mayo and the few other hamlets that knew of its existence).  Three years after his death, in 1999, modern English master Donald Steel was commissioned to exploit the possibilities of some dunes land adjoining the Hackett layout.  The result was a re-routing of the course, with six holes on the less interesting flat land of the old layout replaced with six new holes in the dunes.  (The six old holes were augmented with three new ones to create the nine hole Scurmore course.)

Whether peering out at the Atlantic from its many elevated tees or hiking through its brilliant green tinted dunes, Enniscrone offers myriad pleasures.  The magnificent 556-yard par-5 second hole – “Kilcummin” – offers unforgettable ocean views as you make your approach to the seaside green.  The short par-4 Number 13, “The Burrows,” is one of Eddie Hackett’s gifts to the course.  From the tees overlooking the estuary of the River Moy, there’s a classic blind first shot to a narrow fairway that’s bounded by rolling dunes and replete with the humps and hollows that may send the perfect shot into the deep rough—or redirect the wayward shot into a premium position.  (At least there’s a white aiming stone to show the way!)  If you find the short stuff, it’s a short iron to a green guarded by deep bunkers.

“Enniscrone was a pure pleasure, with the long views and idiosyncratic bounces you expect from an Irish links course,” John continued.  “But what made the round so memorable for us was Eddie, the caddie.  He knew every inch of the course, and delighted in pointing out landmarks in the hills and across Killala Bay – though we had the impression that he probably had never traveled to those places, or perhaps even outside of Enniscrone.  His brogue was delightful – when calling out yardage to the pin, 144 yards came out ‘one-fardy-far.’  And seeing that it was our honeymoon, he was very eager to take pictures of us throughout the round.

“Melanie and I invited Eddie to join us for a pint after the round, and he accepted – though only after showering and changing out of his work clothes into ‘proper’ attire.  We were joined by the club pro and felt right at home.  Before leaving, we asked Eddie if we could take his picture.  He acquiesced, but he wouldn’t smile, though he was certainly a happy soul.  I think it he felt shy because of his missing teeth.”

John Steinbach began his career with TaylorMade Golf in 1982 as a regional sales manager.  He’s worked with the company for 25 years, serving as vice president of advertising and publication relations and later as TaylorMade-Adidas Golf’s director of public relations.