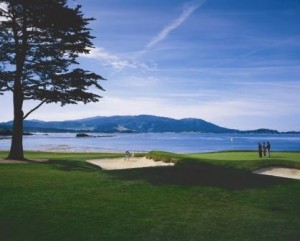 Thanks to countless televised tourneys, the 18th at Pebble is one of golf's best known finishing holes. (Photo Copyright Joann Dost)

Professional golfer and all-around nice guy Mark O’Meara does not mince words when asked about his favorite golf course.  “I’ve played on the Tour for 24 years, all over the world, and I’m hard-pressed not to put Pebble Beach at the top of my list.  Since before the first time I played there when I was 16 and participating in the California Amateur Championship, I’d heard so much and had so many expectations.  When I drove on to the 17-Mile Drive, it didn’t let me down.  It was incredible then, and it’s incredible now.  I’ve had the good fortune to play with many celebrities, athletes, and politicians.  I’ve had a great time every time.

“And it doesn’t hurt that I’ve had some success there.”

The Pebble Beach Golf Links was established on central California’s Monterey Peninsula in 1919, spanning a spit of land Scotsman Robert Louis Stevenson called “the most beautiful meeting of land and water that nature has produced.”  (This quote has often been used to describe the course, though it was uttered decades before ground was broken on Pebble’s first tee box.)  It was designed by Jack Neville and Douglas Grant – two prominent California amateur players with no course architecture experience whatsoever.  As any good golf architect would advise, Neville and Grant didn’t set out to impress their vision upon the land, but instead let the land define their task.  Near the end of his life, Jack Neville, speaking to the San Francisco Chronicle, had this to say about his role in creating Pebble Beach:  “It was all there in plain sight. Very little clearing was necessary. The big thing, naturally, was to get as many holes as possible along the bay. It took a little imagination, but not much. Years before it was built, I could see this place as a golf links. Nature had intended it to be nothing else. All we did was cut away a few trees, install a few sprinklers, and sow a little seed.”

Thanks to years of televised final round coverage of the AT&T Pro-Am and a smattering of U.S. Open Championships – not to mention countless golf calendars and coffee table tomes – the links of Pebble Beach are superimposed upon the world’s collective golf consciousness.  There’s the iconic lone cypress, once attacked by arsonists but saved by a vigilant Carmel resident.  There’s the wee seventh hole, a mere hundred yards to a well-bunkered green backed by the Pacific that can demand a delicate pitch or a slugged long iron, depending on the wind.  Then there’s the breathtaking eighth, a 416 yard par-4that demands a daunting second shot over an ocean chasm to reach a precipitously sloping green.  Average players, lacking the might to position themselves properly for this approach shot and/or to carry the cove, would benefit their tallies by bailing out and laying up on the left side of the fairway.  But duffers don’t travel from all ends of the earth to play it safe, so grab your hybrid iron or trouble wood, take your best swing and drop a ball into the Monterey Bay.  It’s all part of the experience.

If there’s one hole that defines Pebble Beach in the popular imagination it’s the 18th, a 543-yard par 5 sprawling Carmel Bay that’s widely considered golf’s finest finishing hole.  Walking up the misty fairway on an off-season afternoon, accompanied by the sound of lapping surf and barking leopard seals, it’s easy to imagine the penetrating gazes and roaring applause of thousands of onlookers as you prepare to hit a safe third shot home en route to your victory.  Mark O’Meara has known that sensation an amazing five times.  But one instance is especially etched in his heart.

“I had won the AT&T Pebble Beach National Pro-Am in 1989 and came back in 1990.  This time, I invited my dad, Bob O’Meara, to play as my partner.  He had played with me at the tourney a few years before, but we didn’t win, though he had made the cut.  I was paired with my dad all four days, and he made the cut again.  I don’t know of any other competitive sport where you can play with your dad alongside you.  Being able to share something like this with your dad is just an amazing thing.

“I was fortunate enough to have another good tourney in 1990.  On the final day, we reached the 18th, and I had a one shot lead.  I only need a par to win.  Throughout the tourney, my dad had always hit first.  He drives very straight generally, and here, on the 72nd hole of the tournament, he pulls it left, right into the ocean.  He turned to me and said ‘This isn’t a good time to hit a shot like that, is it?’  I said, ‘No dad, it’s not the best time.’  I bore down extra hard, and got it down the fairway.  We’re walking together down the fairway, and about 80 yards from the tee, as we’re getting to the place where his ball went out, my dad asked, ‘What do you want me to do?’  I said, ‘If I were you, I’d keep the ball in your pocket and walk up the fairway with me.  Take in the beauty, the fans, the television cameras.  Take it all in, and enjoy it.’  My dad turned to me and said ‘You know, that’s the best advice you’ve given me all week.’  I proceeded to par the hole and won the tourney, and gave my dad a hug and kiss on the 18th green.

“About a month later, I got a call from my dad.  He said, ‘I flipped through the USA Today the day after the tournament.  There was a big story about your victory, and the big purse you got.  Down below the big story, there was a listing of team scores.  It said that your team had won $8400.  I’m wondering when I can expect my check for $4,200.’  I said, ‘You can’t collect money dad, you’re an amateur.’  He said, “Okay.  I’ll turn pro.”

Mark O’Meara took up golf when he was 13, and turned pro in 1980, shortly after graduating from Long Beach State University.  Since turning pro, Mark has won more than a dozen PGA tourneys, including the AT&T Pebble Beach National Pro-Am (five times), the Masters (1998) and the British Open (1998).  He is an avid and accomplished fly fisherman and fly tier, and recently teamed with PGA TOUR Design Services to build TPC of Valencia, California.  Mark lives in the Orlando, Florida area with his wife Alicia and children Michelle and Shaun Robert.

Getting There:  Pebble Beach and the other attractions of greater Carmel are within a few hours drive from the San Jose and San Francisco airports, both of which are served by most major airlines.  Many visitors will come upon the 17-Mile Drive as they sojourn along the California coast from San Francisco to Los Angeles.

Course Information:  The par 72 Pebble Beach Golf Links measure 6,737 from the back tees, and carry a championship rating of 73.8.  Pebble Beach currently boasts America’s highest public course greens fees — $495.  Caddies, carts and rental clubs are available.  Despite steep rates, tee times are hard to come by, so plan in advance.  For reservations, call 800-654-9300 or visit www.pebblebeach.com.

(from Fifty Places To Play Golf Before You Die)