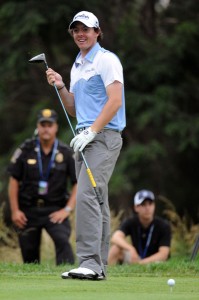 Rory McIlroy’s resounding victory at the U.S. Open might be great for golf, but it won’t be playing dividends for the PGA Tour.

The native of Northern Ireland elected not to become a member of the PGA Tour this year. As a result, he is not eligible to accumulate points to be a part of the season-ending FedEx Cup playoff series. That means there is no way golf’s hottest sensation will be in the field for any of the four tournaments in New York, Boston, Chicago, and Atlanta.

McIlroy’s absence will be a blow for the FedEx Cup tournament in my town, the BMW Championship at Cog Hill. He would have been a huge draw for the BMW. The tournament can use all the help it can get while struggling to attract fans with a challenging September date in the Chicago area.

The same could said for the other three events: The Barclays in New York; the Deutsche Bank in Boston, and the Tour Championship in Atlanta. The star meter for those tournaments will be down without McIlroy.

Commissioner Tim Finchem’s creation also can’t count on the presence of Tiger Woods, who continues to be sidelined with health issues. He currently is 107th on the FedEx Cup points list. He would have to be in the top 125 to qualify, which is no sure thing if he doesn’t play.

(Stop for a second: Am I really writing about FedEx Cup points in June?)

Last November, McIlroy opted against joining the PGA Tour, which would have required him to play in a minimum of 15 events. Instead, the 22-year old elected to remain on the European Tour.

Players such as Luke Donald and Graeme McDowell maintain their memberships on both tours, but McIlroy didn’t want to go that route. He likes the comfort level of playing the bulk of his golf in Europe.

McIlroy stood by his decision when asked about it prior to the U.S. Open.

That’s great for McIlroy, not so great for the PGA Tour. If he is going to become the No. 1 player in the world, and perhaps a transcendent player like Woods, it won’t look good if he isn’t playing in the Tour’s four-tournament FedEx Cup playoffs. McIlroy already opted to skip the Players Championship in May, a major snub that only will look greater if he does the same thing next year.

You can be sure Finchem is lobbying hard with McIlroy’s agent, Chubby Chandler, to get him to become a PGA Tour member. The campaigning probably intensified exponentially after last week’s showing at Congressional.

The PGA Tour is in negotiations with the networks for a new TV deal. With Woods’ star in a free fall, Finchem would like to the chip of a new rising star in McIlroy.

Finchem, though, can’t necessarily say the PGA Tour is best tour in the world anymore. While the depth probably is greater in the states, the top four players in the world rankings now are Europeans.

Did I say Finchem will be lobbying Chandler? Begging might be the better word.