by Evelyn Gruber and Andy Wapple

The thought of playing golf on land owned for 20 years by Sean Connery is enough to evoke memories of James Bond’s famous round with Goldfinger. In the 1964 film, 007 famously beats his cheating adversary in a marvelous scene that sets the tone for the rest of the classic thriller. Filmed at the Stoke Poges course at the splendid Stoke Park, in the English county of Buckinghamshire you only have to look at Connery’s swing to see he is indeed a good golfer. Many years ago he

had the ambition to spend some of his fortune secured over his acting career on a large plot of land in the South of France known as the domaine de Terre Blanche. With an imposing chateau and lots of undulating land, he had visions of 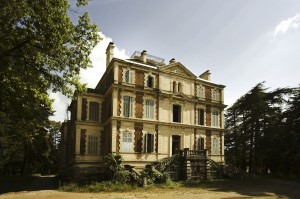 Terre Blanche is nothing like Stokes Poges, which also provided the setting for Tomorrow Never Dies, but it too would make a fabulous setting for a Bond film. At 266 acres, it is bigger than Monaco, has two fabulous golf courses, an internationally acclaimed golf academy and performance centre, and if you pardon the continuing 007 theme, a hotel to die for. The scenery is ruggedly spectacular and the area is dotted by medieval hill towns with romantic names such as Tourrettes, Mougins and Valbonne. Hopp had grand designs from the beginning when he bought Terre Blanche from the Swiss bank that acquired the property from Connery. With a passion for sport, particularly golf, and a mind set that demands excellence in everything, it was no surprise that he created something special.

Work on the courses, designed by world-renowned architect Dave Thomas, started in 2000 and was completed four years later when the fabulous Le Chateau course was opened with rapturous applause, followed by its sister course, Le Riou. Using their natural topography, both courses wind through spectacular pine- and oak-lined hills, providing sweeping views onto the mosaic of tree-clad hills and medieval villages of this classically Provencal countryside. Inspired by this stunning terrain, Dave Thomas created a series of unforgettable shot-making challenges, enjoyable by golfers of every ability. Designed to complement each other, both Championship courses share quality thanks to detailed attention of the ground staff, yet have different charms. 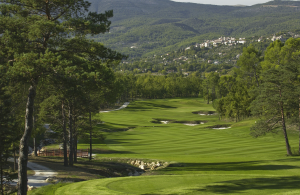 The wide tree-lined fairways of the fabled 6,481-metre Le Chateau course give the initial impression that this is a fairly easy course, yet you need length off the tee and a good ability to read quick, sloping greens to score well. It is also fairly undulating, but thankfully the man-made water hazards are generally more scenic than punitive for the average golf swing. A par five opens the round, but it takes three good hits to reach the first of the huge, sloping greens. You are soon away from the few properties enjoying the chirping of the birds and the gorgeous aromas of the wild countryside of the acclaimed Cote d’Azur.

A tight downhill dogleg left marks the start of this testing course, regarded as more of a challenge of your strategy than its slightly longer sister.

There are decisions to be made here whatever your handicap but players are rewarded with equally gorgeous surroundings and stunning views. Many stylishly bunkered holes lead to good-sized, undulating greens; getting down in two is far from guaranteed. Both the excellent par-4 9th and signature par-5 18th are strong closing holes of the two nine-hole loops, where fairways are flanked by cascading water features from tee to green.

It did not take long for Terre Blanche to attract the attention of Europe’s most eminent golfing organization, The European Tour. The resort became a member of the exclusive European

Tour Properties Portfolio and is only the third, alongside The London Club and Le Golf National, Paris, to gain European Tour Destination status. It is also home to the European Tour’s first Performance Institute, named The Albatros, which was opened in association with the David Leadbetter Academy. As a result, Terre Blanche is the winter training base for the French amateur team, who were the 2010 world champions and the resort will host the French Riviera Masters in September 2012.

The hotel, currently run by the Four Seasons Group, is soon to transfer to the Hopp family who pledge to maintain the high standards already attained. A long driveway takes you to reception set amid splendid mature gardens featuring pieces from the owner’s extensive art collection. Understated glamor and all the requirements of a seriously top destination are immediate to see as you are greeted at reception. Guests are accommodated in the 115 suites which cling to the sides of a hill with views over the villages beyond. Each includes a private terrace, living room, bedroom with king-sized bed, large bathroom with tub, separate walk in shower two wash basins. Transport to and from the suites to reception, spa, 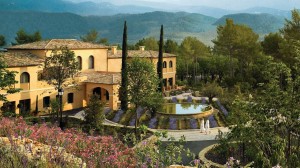 clubhouse and restaurants is provided by a fleet of chauffeured golf buggies.

With both Nice and Cannes an easy drive away, Terre Blanche is the perfect gateway to the French Riviera and deserves to be on the short list for anybody seeking exclusive, high quality golf and accommodation in one of the most alluring parts of Europe.

Leave a Reply to car insurance for teenagers average cost