This is Part III in a series of five posts chronicling my trip to Bandon Dunes Golf Resort from January 12-17, 2012. Read the other related posts here. 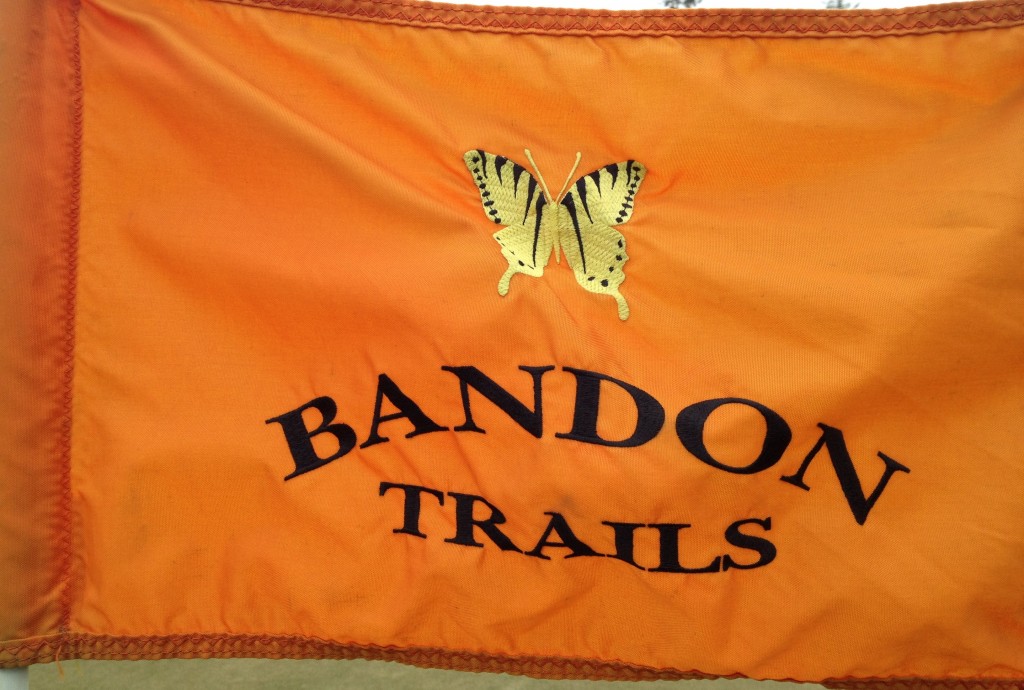 On Saturday, we awoke to a crisp but beautiful morning ready for our 9:40am tee time at Bandon Trails.  Before our round, Mark and I made our way to the all-you-can-eat buffet breakfast which was included daily with our stay and play package.  The buffet featured reliable and filling American breakfast fare.  The various young ladies that waited up us each morning were friendly and attentive.  Juice was always served promptly and coffee kept hot.

Following breakfast we squeezed in a quick practice session and then took the shuttle over to “Trails”, as the locals called it.  I quickly remembered that I had run out of cash and would be unable to pay Richard, my caddy, for his second round of service.  Thankfully, all of the resort’s pro shops offer “caddy cash”, an option whereby a guest can obtain greenbacks from the shop and have the money charged to his room.  This allows a golfer to pay his caddy post round without having to stop at the ATM first.

The weather turned much grayer than the early morning, the temperature dropped, and the winds picked up a bit.  We met our playing partners, Ken and Rob, on the practice putting green and later learned they were visiting from Eureaka, California.  After a few minutes of warming up, we teed off.

The course design team of Coore & Crenshaw immediately present their case to the golfer. The tee shot off the 1st requires an accurate drive to an moderately-sized fairway.  Should you miss, there is nothing but tall grass, steep knolls, and blowout sand bunkers to contend with.  I badly hooked my opening shot into the mess and was forced to blaze a trail through the grass and sand to find my forlorn ball. 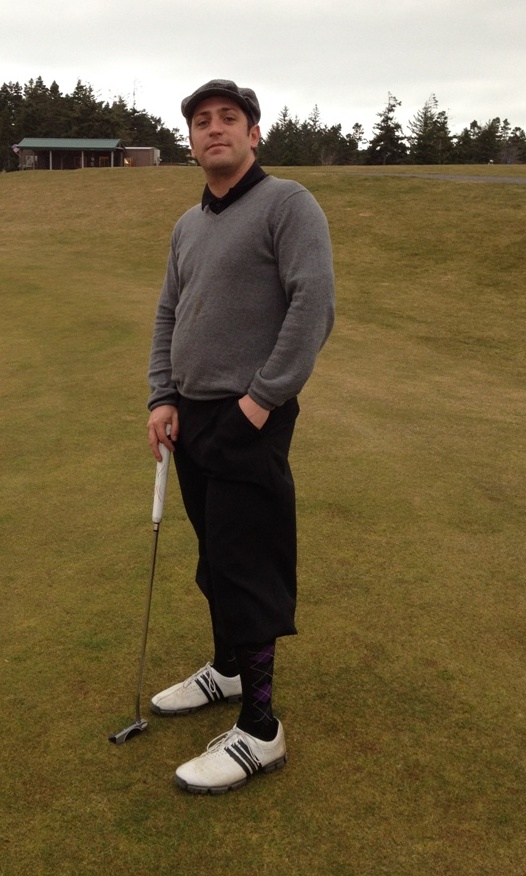 I am wearing golf knickers for the first time. They were a gift from Mark this past Christmas. I ended up really liking the look.

The long Par 3 2nd hole was one of my favorite on the course. From an elevated tee box, you must contend with a natural sand dune that runs the stretch of the right hand side of the hole.  On the the other side is a large greenside bunker and shrubbery with which to deal should you stray left. The wind was gusting hard from right to left and sent several players’ balls bounding off into the foliage well left of the green. Rob’s tee shot ended up on the face of the sand dune after overcompensating to the right. Teeing off last, I was able to shake off my rocky start on 1 and make great contact with the ball, cutting it into the wind.  I landed on the front edge of the green and felt it an accomplishment, having seen where my companions’ balls ended up. I two-putted for a rewarding par. 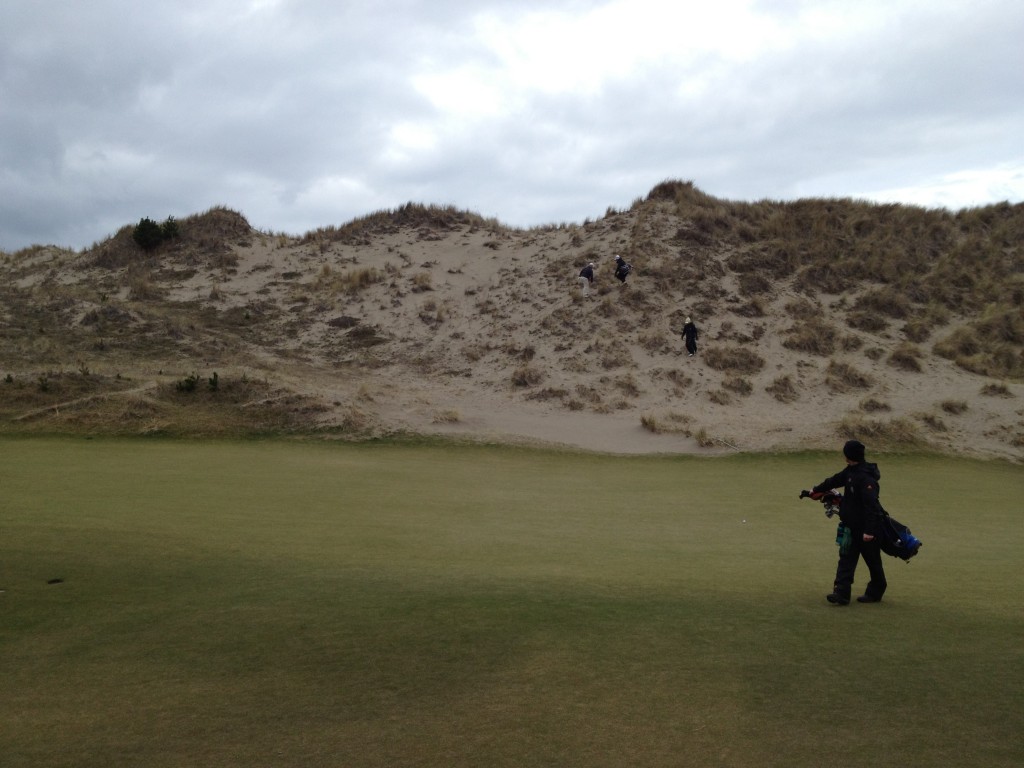 Do not miss right off the tee on the 2nd. You will contend with a severe downhill shot from the face of a sand dune. My ball looks relieved to be sitting on the green in one shot.

The adventure continued as the course began to head inland.  In so doing, we were immediately struck by the rugged nature that Coore and Crenshaw were able to capture in their design.  Meandering through the trails, I liked the story of Oregon they told through their hole construction.  Of the four courses at Bandon, I felt that Bandon Trails best captured the flora and fauna of the southern Oregon coast.  I also appreciated the subtle, woodsy tone of the hand constructed wood fencing that outlined some of the walking paths.  I have seen this style fencing before while playing at Cordevalle Golf Resort in San Martin, California.  It’s a simple rustic touch that adds character to a course’s setting. 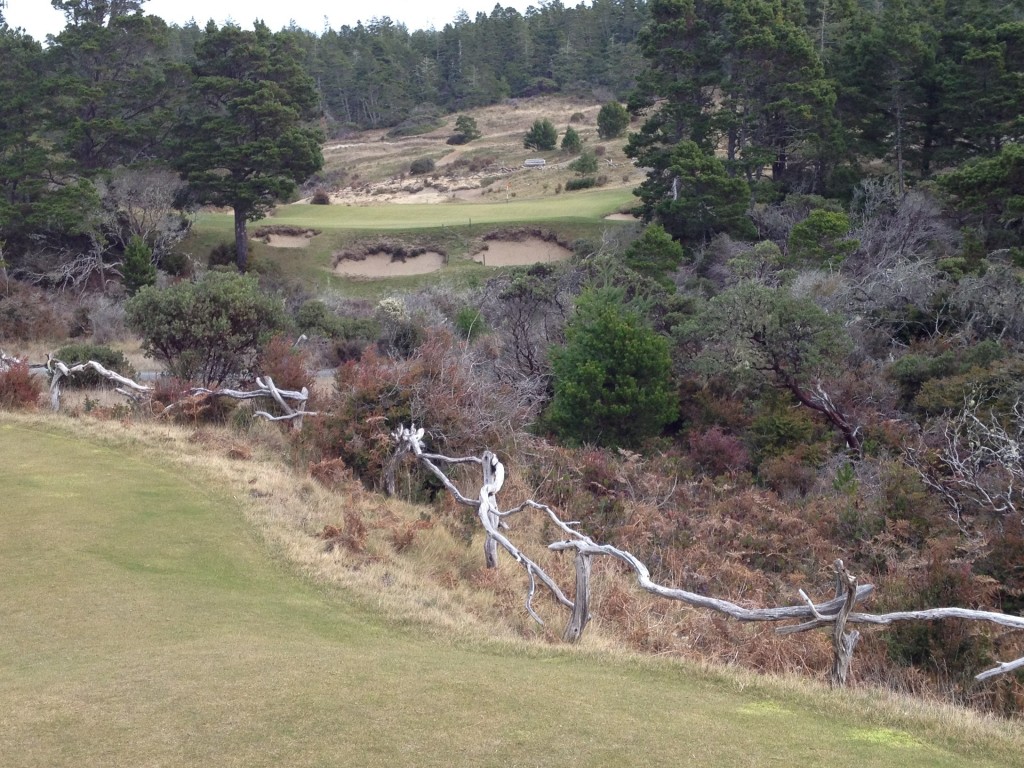 The wonderful looking Par 3 5th hole at Bandon Trails. This is the site of the craziest putt I’ve ever made.  Notice the rustic fencing.

On the 5th hole, we faced a nicely framed 135-yard shot to a two-tiered sloping green. Four menacing bunkers guarded the front of the green, so an accurate shot is required.  My swing continued to lack rhythm and I thinned a nine iron into the hill behind the green.  After a tough wedge off the hill face, I was on the green, but about 75 feet away from the pin on the bottom tier of the putting surface.  A two putt itself was going to be challenging.

After receiving a read from my caddy, I hit the ball with sizable force in order to run it up the two swales in front of me.  The ball was hit much too hard, continued up the hill, ran up a backstop behind the hole, did a hairpin turn around a drainage pipe, and began to run back down the backstop toward the hole.  Its speed started to look very good as it continued the last 25 feet along the green until it approached the cup and died into the hole with its final rotation.  The group erupted and we all laughed and hollered.  It was one of the luckiest shots of my life but it was also one of the most entertaining.  My caddy Richard listed it as one of his top five moments in his many years of caddying at Bandon. 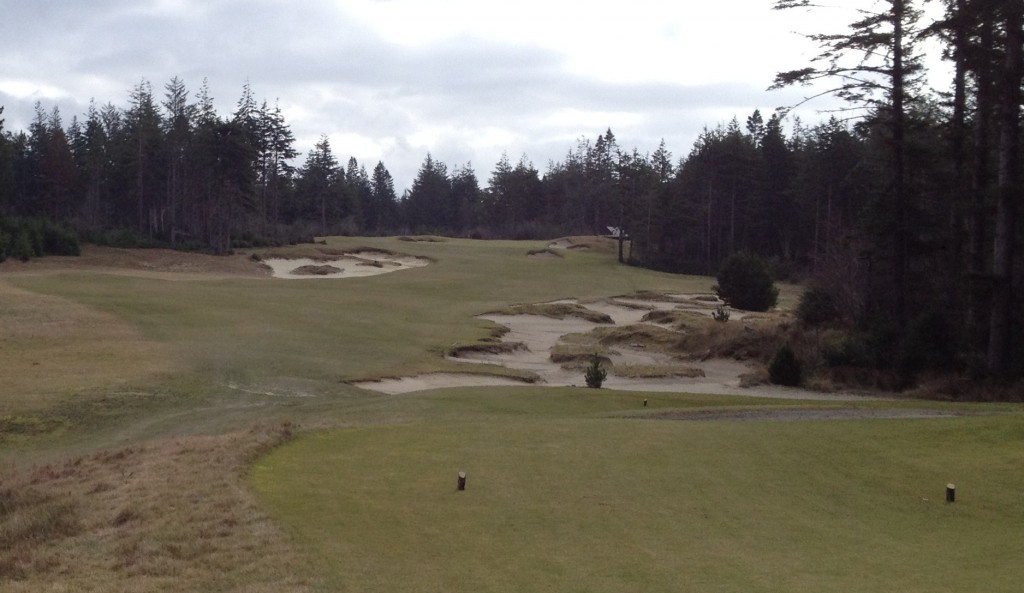 The bunkering on the Par 4 7th hole is a worthy display of the rugged style used by Coore and Crenshaw throughout the entire course.

I found the Par 4 11th hole to be delightful despite the fact that my second shot found the large lake running the length of the right hand side of the green.  The lake, teeming with life, featured lily pads, frogs, turtles, and lots of submerged white golf balls within view of the its surface.

Unfortunately, I was disappointed with the 14th, a short par 4 that played down into a ravine landing area and back up to a green that was being reconstructed with its greenside bunker also under repair.  Even without the remodeling, it seemed like an awkward hole at best. While I continued to appreciate Coore and Crenshaw’s design aesthetic through the remainder of the round, I felt like the finishing stretch ran out of steam.  Holes 15-18 had their moments, but they didn’t present the golfer with a memorable closing movement like a round of golf should.

That said, I do give the course credit for helping me to escape. The inland trek gave the day a feeling less of a round of golf and more as a spirited jaunted through the Oregon forest.  With the seaside links of Bandon Dunes and Pacific Dunes claiming the coastal portions of the property, Bandon Trails is an excellent third installment that gives golfers a refreshing look at the region’s topographical scenery.  It will be interesting to witness how the rugged design philosophy of Coore and Crenshaw transfers to ocean vistas when the resort opens its fifth course this May 2012, Bandon Preserve, a thirteen hole Par 3 Course located on the stretch of land to the south of Bandon Dunes.

Though it’s a tough test of golf that plays much differently than the resort’s other three courses, Bandon Trails is a round not to be missed upon your visit. 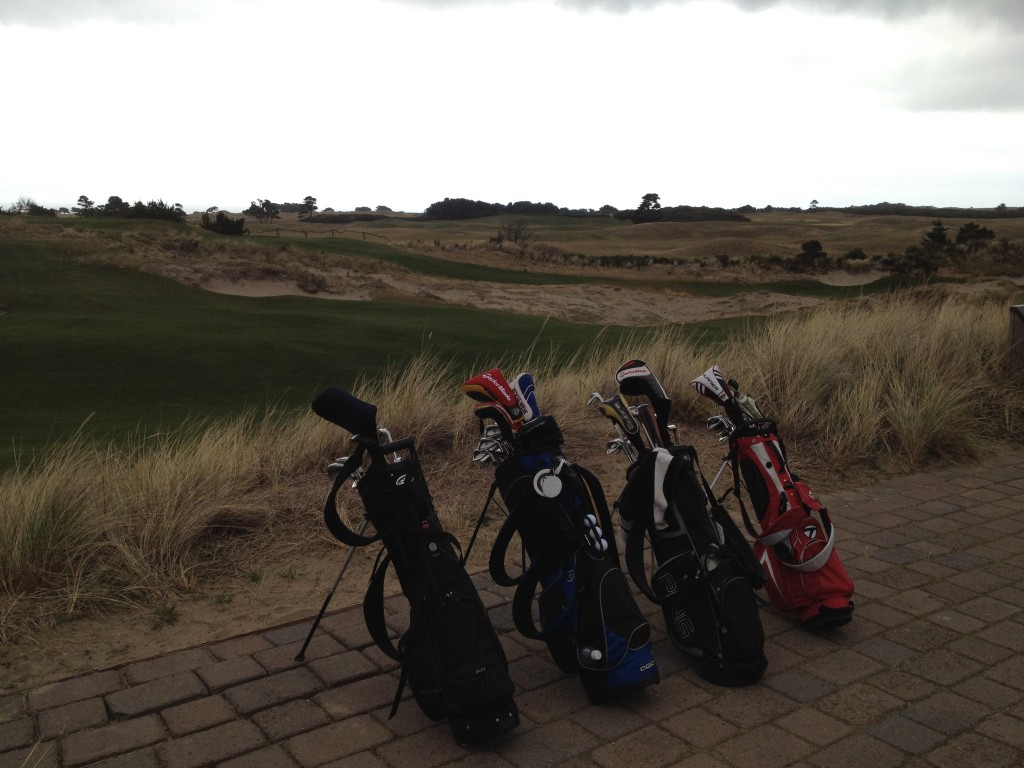 Bandon Trails provided a testing round of golf for all four of us that day.

One Response to “My first visit to Bandon, Part 3: Bandon Trails”