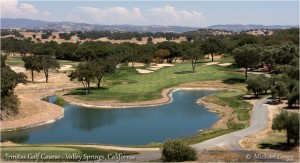 How long will Trinitas remain open to public play?

The story behind the creation of Trinitas Golf Club in Valley Springs, Calif. (22 miles east of Stockton) is as unique and novel as they come.  So, too, it seems are its legal battles.  The course is currently at the center of a lawsuit in Calaveras County Court where the County Planning Commission claims the course is in violation of zoning laws and fails to meet the definition of agrotourism as defined under Calaveras County bylaws.  To appreciate the unique nature of the case, however, it’s worth understanding the course’s backstory.

Mike Nemee, the owner of Trinitas, bought the land several years ago primarily for its historic oak trees, olive orchards, and wide-open cattle grazing spaces.  In fact, Nemee first purchased the land in order to start an olive oil business from the olive trees, which he did, and sells small batches of Trinitas Olive Oil.  Soon thereafter, Nemee picked up a copy of the book Golf Course Architecture by Michael Hurdzan, and began to sketch golf holes.  With no prior experience in landscaping, turf grass management, or golf course architecture, Nemee pieced together an 18-hole golf course on the land.

As Ron Salsig of the NCGA Golf Magazine chronicled in his profile of Trinitas:

It took seven years for the vision of Nemee and his creative friends to become reality. No bureaucrats, no beancounters, hardly any organization. Just the confluence of a vision.

Since its opening, Trinitas has flown under the radar.  Champions Tour golfer Bob Eastwood, friend of Nemee’s, praised the layout immediately.  Well-known golf travel writer and blogger, Bob Fagan, served as a consultant to the course and has labeled its par 3’s as some of the best in all of California and possibly beyond.

The unorthodox style in which the course was built, and in which lies much of its charm, is, ironically, the same reason why Nemee and the course now find themselves embroiled in a novel legal battle.

Buzz Eggleston of the Calaveras Enterprise explains the story behind Michael and Michelle Nemee filing suit against the county and its joinder with a pending bankruptcy suit against the Nemees.

The Nemees originally began work on what would become the golf course in 2001, saying it was for their private use. They also maintain an olive orchard on the property and later, when they decided to pursue county approvals for a commercial golf course, said the course would provide supplemental income to support their agricultural operations.

After hearings and studies, including an environmental impact report, the county Board of Supervisors denied the project, leading the Nemees to file various lawsuits. After a Stockton bank that had loaned money to the Nemees began to press them for repayment, the couple filed for bankruptcy protection. Their civil cases were then joined with the bankruptcy case, over which Judge [Ronald] Sargis also is presiding.

The crux of the case centers on whether the Nemees’ use of the property–combining olive orchards, cattle ranching, and a commercial golf property–qualifies as “agrotourism” under the Calaveras County ordinance.  Attorneys for the Nemees had argued that a commercial golf course is permitted under the county’s agricultural laws, by past practices of the county and by statements allegedly made by public officials in support of that belief.  One of the witnesses for the Nemees, David Zilberman, a professor of agriculture and resource economics at University of California-Berkeley, presented testimony that presents a different view on the definition of “agriculture”.

“Agriculture is an activity where you apply inputs like fertilizer or water to the land to grow a crop, and the crop is a source of revenue. Now, not all agricultural activities produce food. We have cotton production, we have biofuel production, we have flower production. … Now what we have in a golf course is a product of recreation.”

On November 1, 2011, U.S. Bankruptcy Court Judge Ronald H. Sargis announced his ruling in the Nemee vs. County of Calaveras Declaratory Relief and Equitable Estoppel trial, over which he presided October 13-17 (Note: as of the date of this article, no opinion on the ruling had been released to the public).  He ruled against the Nemees and orally declared during the ruling that:

“The term agritourism does not include a commercial golf course, golf is not agriculture, and Trinitas golf course is not a permitted use under Calaveras County’s agricultural zoning codes.”

The ruling against the Nemees bodes poorly for the future of Trinitas Golf Course.  With the land being included in the Nemees bankruptcy case, it is only a matter of time before the fate of the course may be sealed.  Trinitas Golf Course raises issues related to defining agrotourism and highlights the ill-effects of vaguely-worded local ordinances.  Part of the problem, it seems, is that the course was built as a private establishment for the use and enjoyment by Nemee and his friends.  The minute it became a commercial property open to the public, the morass of government redtape came flooding in and the course now fights to survive.  Without the ability to operate as a commercial venture in the future, the Nemees ability to service the debt on the property may prove untenable and the course may soon become a nostalgic bygone.  So much for thinking outside the box with one’s golf property.

In the meantime, Trinitas Golf Course is still open for play.  The Nemees are encouraging any and all golfers to stop by, play a round, and tell as many others as possible to do the same.  Given the course’s uphill legal battle, one never knows when the opportunity to play the fabled course will come to an end.