This is Part V in a series of five posts chronicling my trip to Bandon Dunes Golf Resort from January 12-17, 2012. Read the other related posts here. 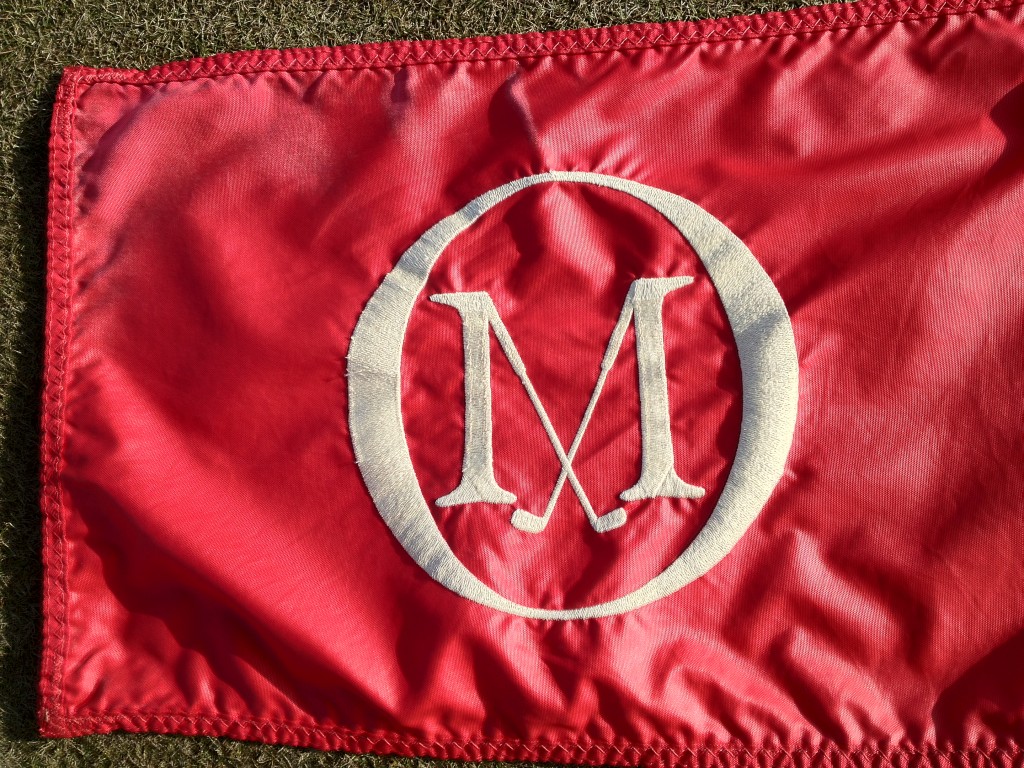 Our original plan for our final day of golf was to play thirty-six holes–Old Macdonald in the morning and Pacific Dunes in the afternoon.  With the unpredictable weather and the short period of daylight in mid-January, that plan was quickly foiled.  We awoke to a beautiful but brisk Monday morning.  On the shuttle ride to breakfast, we were informed that there was a lengthy frost delay on all the courses.  What was supposed to be the first tee time of the day at 8:20am turned into a noon shotgun start.  Furthermore, our delay meant we would squander most of the terrific morning weather and likely encounter some of the nastier stuff forecast for the late afternoon.  But if Bandon will teach you anything, it’s patience.  So we sat tight, stay loosed, had some breakfast, and then eventually began our round where were paired with another twosome, Gunnar and Robert, a father-son combination from Sacramento and Portland, respectively. 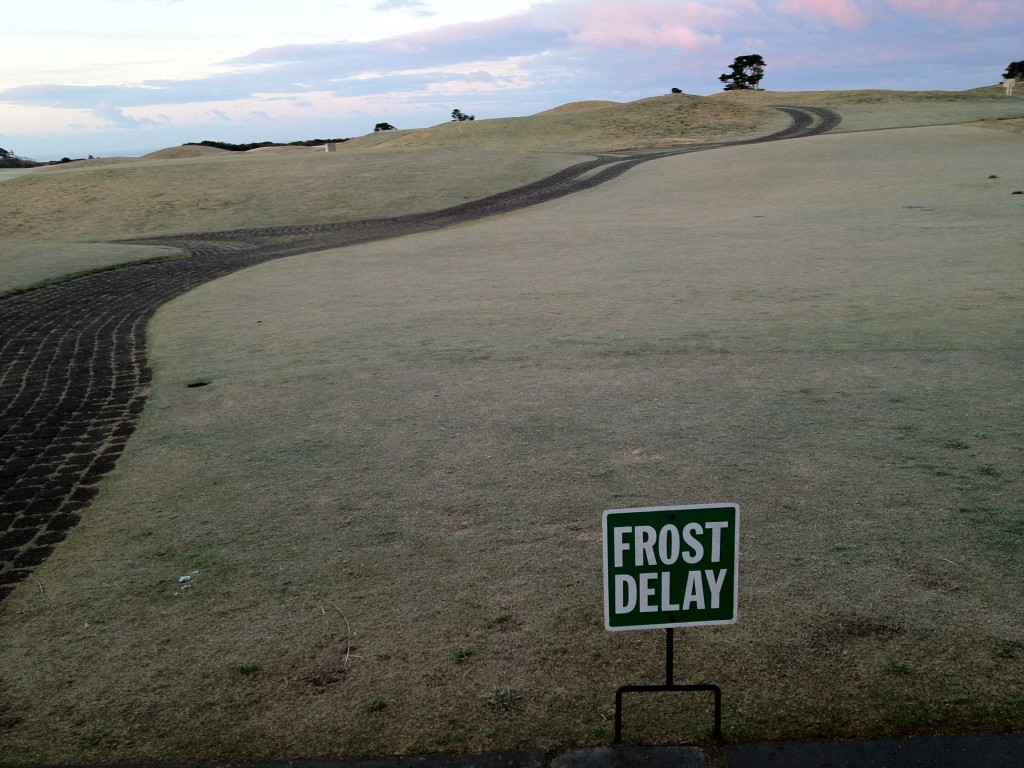 A lengthy frost delay pushed our tee time back four hours and into a shotgun start.

Before the round began, I walked to the top of a small knoll where the 1st and 18th holes were visible.  It looked like a golf course had been placed on the surface of the moon.  The hardened browned earth was pronounced,  the fairways and greens had a much darker hue to them than other courses on the property, and the bunkers were carved out in crater-like fashion. Almost no vegetation divided the different lanes of play.  It certainly didn’t inspire the same grandeur that the other three courses presented. No matter, I thought, there are some great golf courses in Britain and Ireland that look and play just like this.  Was it wishful thinking or a silent premonition?  I’m not certain, but I was certainly correct.
I’m not going to hesitate to say that Old Macdonald, the fourth golf course built at Bandon Dunes Golf Resort, was  not only my favorite, but it was also the most fun I’ve ever had playing any round of golf.  My score wasn’t terrific, but I walked away from the round distinctly remembering most all of the holes and really enjoying all the different shots that I was asked to play.  I was struck by the creativity and imagination that Doak and Urbina team employed when designing the course. More than anything, I fell in the love with the story it told.
For those who don’t know, Old MacDonald is an homage to the early 20th century American golf architect, Charles Blair Macdonald, better known as “C.B. Macdonald”.  Macdonald built the first 18-hole golf course in the United States and was generally responsible for the spread of the game throughout the country. His architectural style borrowed heavily from the features of courses in the British Isles which he had visited regularly before constructing the famed tracks such as Chicago Golf Club (1893), Shinnecock Golf Club (1906), and National Golf Links (1909).
And so, like C.B. Macdonald, Doak and Urbina set out to tell a story with their 18 holes at Old MacDonald.  Each hole references or impersonates features of a MacDonald hole and/or a hole from a famed British course (which MacDonald used for his own inspiration).  It’s not necessary to be familiar with the courses being referenced, but if you are, it makes for a fantastic round of golf. It’s as if you’ve been let in on a secret of which others are unaware and your understanding of the round is somehow more sublime because of it.
Take the 3rd hole at Old Mac, “Sahara”. This Par 4, based upon the 3rd hole at Royal St. George’s, requires a blind tee shot over a large ridge which stares back at you like an imposing wall. The most well-known tree on the property, dubbed the “Ghost tree”,  sits directly in the line of play — a barren trunk with leafless, spindling branches long dead from a bout with lightning. If you remember nothing else from the course, you will remember this tree.  Mark will remember it even more given that his tee shot managed to make it through the branches, passed about 6 inches from the trunk, and landed to the “A position” in the middle of the fairway. He parred the hole. 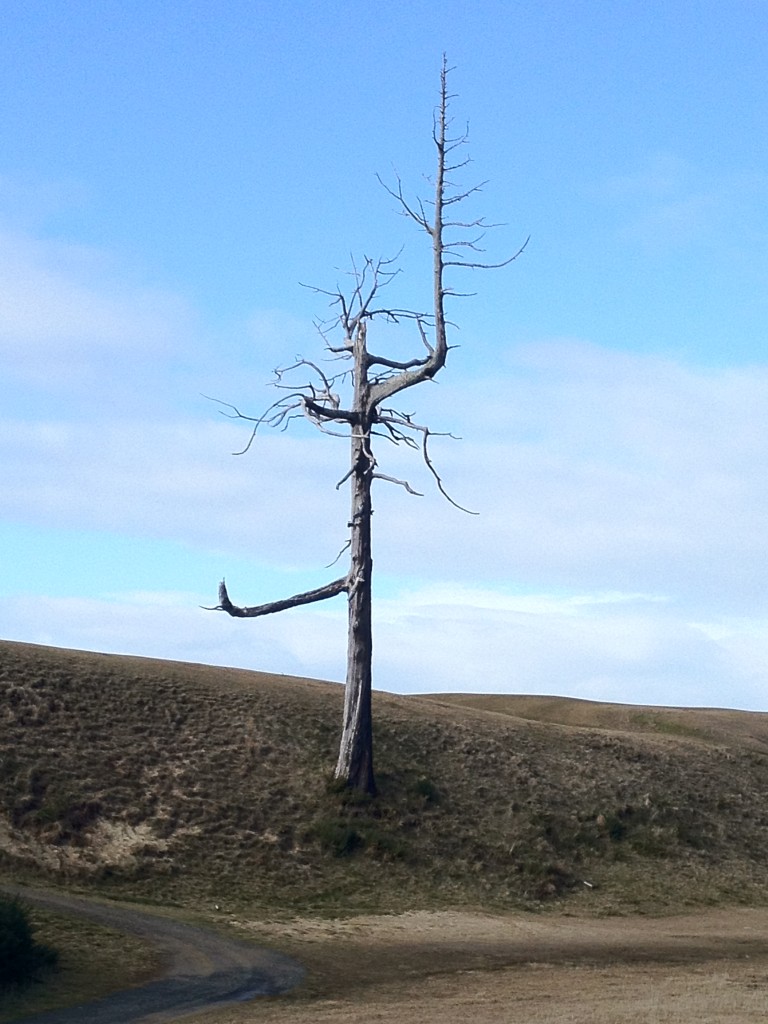 The short Par 3 5th, aptly named “Short”, features one of the largest greens on the property.  Despite its unimposing length, the green complex is fascinating.  There are several tiers to the green and hitting the proper level with your tee shot is imperative if you wish to avoid circus putts with incalculable amounts of break.
This hole is then countered by the lengthy Par 5 6th, titled “Long”, which features the most extraordinary bunker I’ve ever beheld. The bunker, based on the “Hell Bunker” on the 14th at at St. Andrews, is even more imposing than its inspiration. The railroad ties supporting the walls of the massive sand trap looked like a crooked smile from Lucifer himself, as if daring you to enter and take your chances at getting out.  Thankfully, everyone in our group played around the trap and made it safely onto the green. 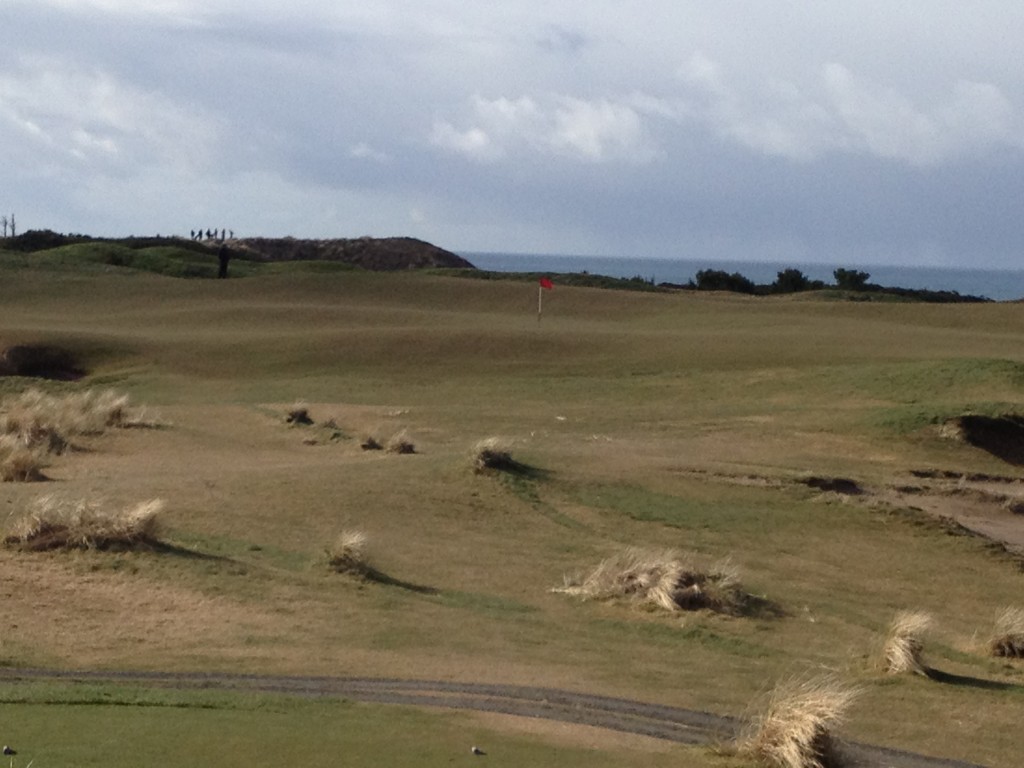 The “Short” hole features a unique green complex. The tufts of beach grass perfectly accent the pleasing simplicity of the hole. 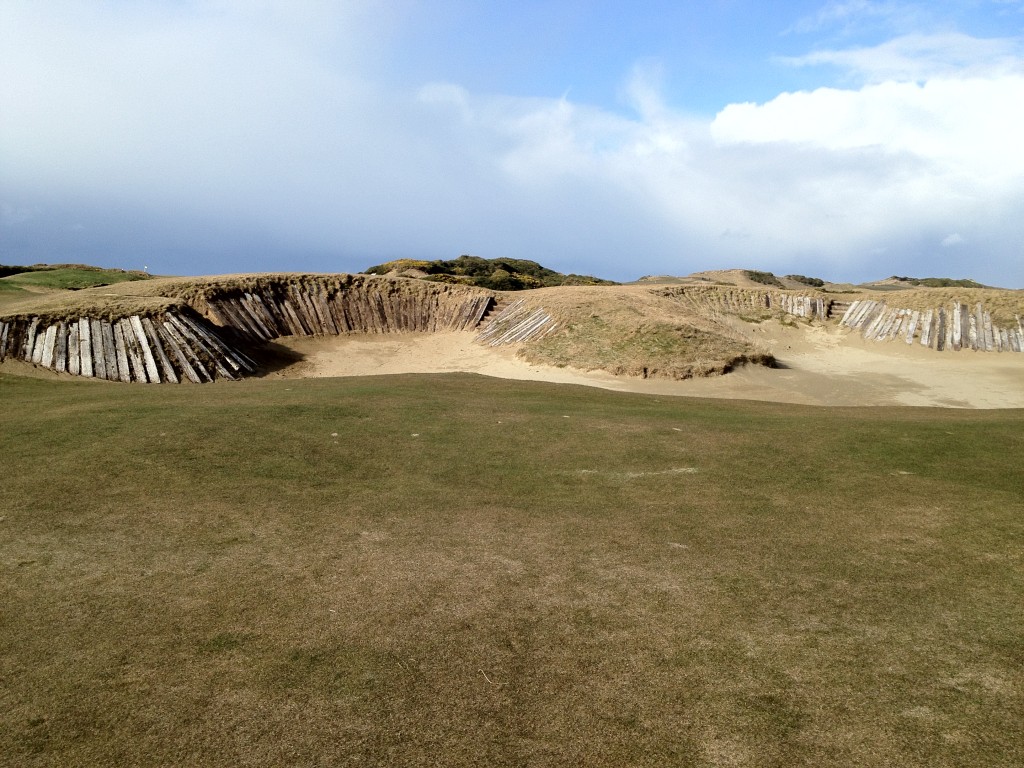 The fairway bunker on the 6th is the most innovative bunker I’ve come across. Avoid it at all costs or there will be hell to pay.

The remarkable stretch of imaginative holes continued with the 7th.  The hole is an original and is one of two on the course not based on any previous work.  It is also one of the best holes on the course.  It asks the golfer to place his tee shot into the middle of a generous fairway at the bottom of a hill.  From there, the hole doglegs left and up a steep embankment as a lonely red flag sit atop the perch awaiting your approach shot.  The second shot requires a good deal of calculation to account for the upward elevation change and  gnarly bunkers guard the right hand side.  The only thing a golfer sees behind the flag is the infinite sky, making him second guess where a ball hit too far might end up.  Upon arriving at the green, you are rewarded with a majestic view of the Pacific Ocean and stand on the highest point on the golf course.
We ambled along in our round.  I was extra pleased with the fact that I could use my bunt driver (a short half-stroke shot off the tee which would fly beneath the heavy winds) and my hyrbid putt (an effortless bump and run shot that I had been practicing all week) on many of the holes.  The firm and fast conditions allowed a golfer to play a ground game if he wished.  As someone who often is not afforded such a chance with typical American-style golf courses, I loved the refreshing fun of rolling multiple shots along the ground.  I also felt that Old Macdonald had the best greens on the property.  They accumulated less sand than Bandon and Pacific and rolled truer than Trails. 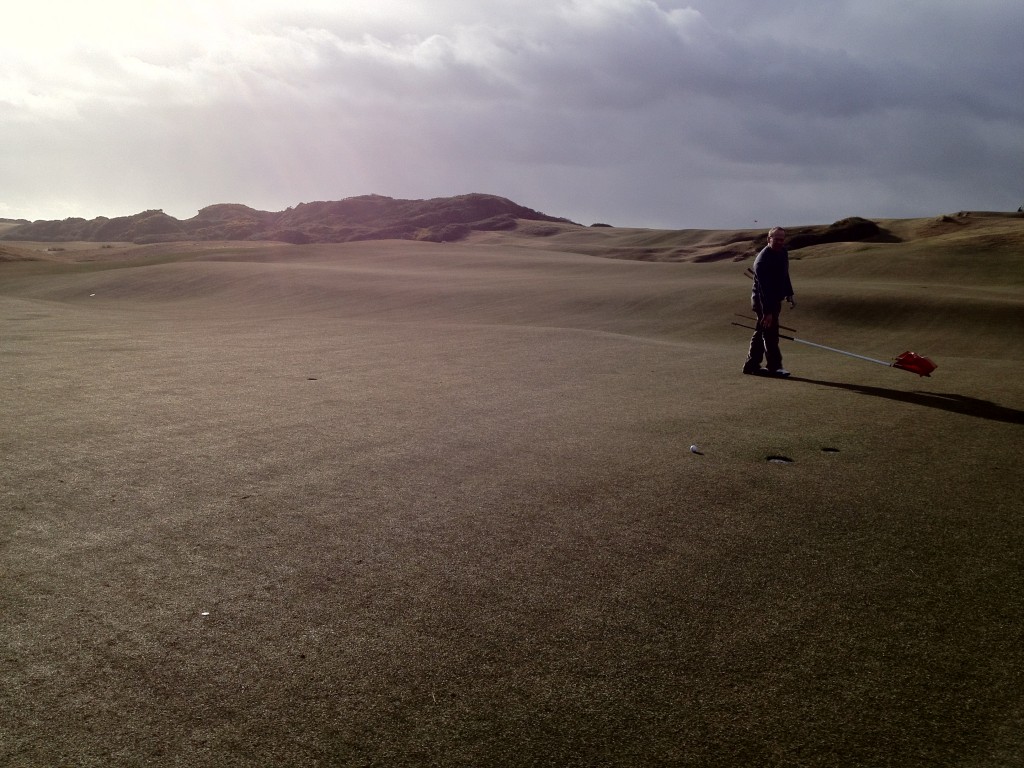 The greens at Old MacDonald are massive and require great touch. The 8th, pictured here, is no exception.

The quirkiness of the course was perfectly summarized with the 18th hole, cleverly named “Punchbowl”.  This Par 4 features a a bowl-shaped green surrounded by small knolls along either side of the green.  From the fairway, the knolls funnels shots down a left-to-right slope and to the bottom of the bowl where the pin is located.
I used a bunt driver off the tee to the middle of the fairway.  From there, I hit a low screamer with my hybrid at least 75 yards left of the pin.  The shape of the knolls funneled my shot along the ground, turning the ball a hard right, and then rolling gently down into the bowl about 30 feet from the flag.  It was nice to have the land formations and gravity do all the work.  In fact, the hole practically begs for a shot such as mine, as playing it aerially makes little sense. Since we began our round on the 18th with the shotgun start, we actually played the hole twice.  As my favorite of any of the finishing holes on the property, I felt blessed to get a second crack at it. We left the 18th green in good spirits.
I will fondly remember my round at Old Macdonald.  It was a fitting end to an adventurous voyage. The weather throughout much of the round was a challenge.  Cold, driving rain and high winds made for difficult scoring conditions.  And yet, I felt accomplished to have braved a second day of extreme conditions on the links at Bandon Dunes Golf Resort. A round like that makes the 19th hole whiskey taste better and warms your soul to its core.
Bandon Dunes is a special place. Any true  golfer will immediately recognize the importance of the experience — its quiet dignity, its egalitarian premise, and its magical ability to distort time and space. Many complain about the difficulty in getting to Bandon, but its remoteness is part of the charm. It is a pilgrimage.  No pilgrimage can be carried out without enduring some travel, without testing your commitment to reach your destination.  The beauty lies in the fact that Bandon will reward you time and again for your efforts and, as it did for me, call you back the minute you leave. 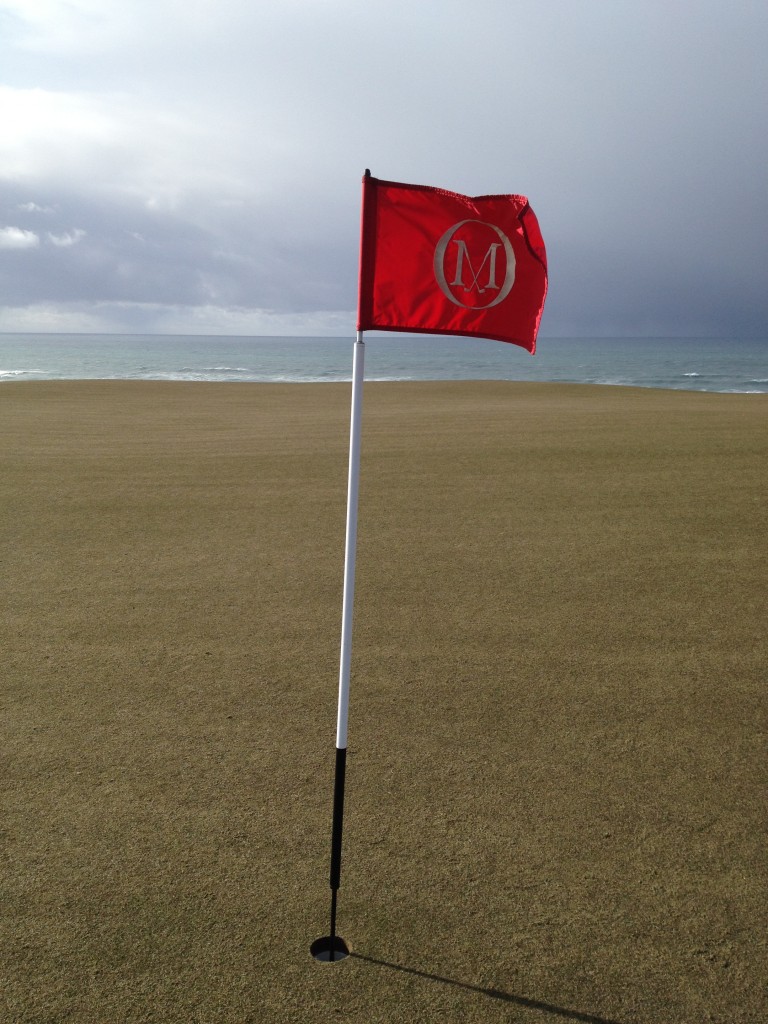