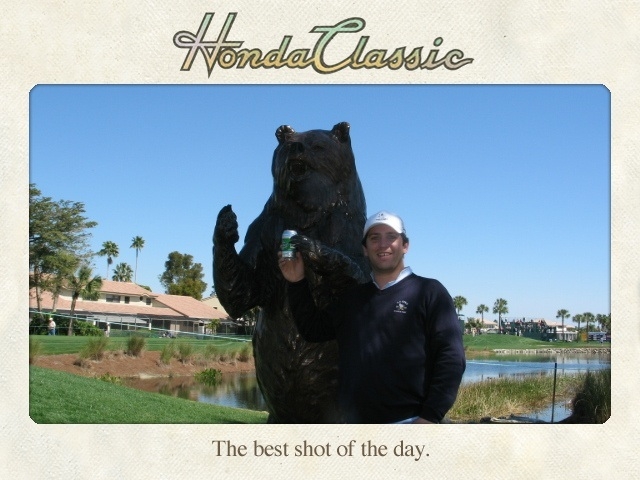 You're know you're in The Bear Trap when...

Two years ago, I had the good fortune of attending the Honda Classic, site of this week’s PGA Tour stop in Palm Beach Gardens, Fla.  Holes 15-17 are affectionately known as “The Bear Trap”, an ode to the Golden Bear, Jack Nicklaus, designer of PGA National.  The stretch of holes are also considered a “bear” because they are very tough, even for the best pro’s out there. A large statute of a bear stands beside the 15th tee box and I decided to have some fun by sharing my beer with him.

PGA National does not necessarily evoke the beauty of some of the Tour’s other venues, but it’s an incredibly challenging course.  When the March winds start blowing over the Florida peninsula, it becomes even tougher. On the day I was in attendance, you could see the frustration of many players who found themselves in the water, the bunkers, or the deep rough.  Simply putt: you must bring your A game to PGA National if you want to win the Honda Classic.

The most interesting (and perplexing thing) I saw that day was Sergio Garcia bolting out of the tee box shortly after teeing off on the 16th.  He ran in a dead sprint down the fairway, veered left under the spectator ropes, and approached a woman with a baby stroller.  He picked the baby up out of the stroller, twirled it around in the air, and said something to the mother in Spanish which a huge grin on his face.  She seemed both shocked and delighted with Sergio’s impromptu move.  It wasn’t entirely clear to me whether he knew the woman, but I imagine he must have since he spoke to her in Spanish (how would he have known she spoke Spanish otherwise?)

Camilo Villegas ended up winning the Honda Classic that year and had a huge Colombian (and Latino) following in Miami the next week when he played the WGC Cadillac Championship at Doral.  Living in South Florida, it was fun to hear a lot of spectators cheer and yell out to the players in Spanish.  Camilo and Sergio were among their favorites.  Certainly NOT something you see every day at the usually demure PGA Tour events.  Definitely one of those things that give the Florida Swing a little spice.