This is Part V in a series of five posts chronicling my trip to Bandon Dunes Golf Resort from January 12-17, 2012. Read the other related posts here.

“What seems so special about this place is that it will likely go on to become a legendary landmark in the game of golf,” I told my friend, Mark Martinez, as we walked along the wooded foot path behind Chrome Lake, “And we’ll be able to tell our grandchildren that it was built in our lifetime and we were fortunate enough to have played it.”

After a failed attempt to visit six years ago with a group of old high school buddies, I finally managed to make the trip to Bandon Dunes Golf Resort in January. My friend Mark and I decided to roll the dice with the weather and booked a five day trip over MLK weekend from January 12-17, 2012.

“It’s all about the golf.”  This is what I had read and heard from so many other golfers who had made the trip to Bandon Dunes Golf Resort before me.  After five days of experiencing it for myself, I can say they were correct.

Mike Keiser’s vision when obtaining the property on the southern stretch of the Oregon coast was to build a resort focused solely on golf and provide Americans the chance to play a links-style version of the game without ever having to pack their passport.  The resort’s four (soon to be five) courses speak to the golf-centric nature of the place: only walking is allowed; there are no unnatural features on the course; no ball washers or trash cans by the tee boxes; caddies are encouraged; and a battle with nature’s elements is inevitable.

Mark and I stayed in a Chrome Lake Loft, one of the nicer accommodations on the property. The lofts features two spacious bedrooms with their own mounted flat screen television, two bathrooms, a spacious living (with another flat screen), and a fireplace and dining table.  Showers and beds were spacious and, had we brought a car, there was plenty of parking throughout the resort with easy to follow road signs.

On our first morning, we took a walk along the footpath trails around the lake and discovered signs for a labyrinth.  We soon stumbled upon a small clearing in the middle of the  woods where a replica of the labyrinth at the French Gothic cathedral, Chartres, was embedded into the ground.  I was immediately struck by the beauty of the design and the haunting appeal of medieval labyrinths. A plaque by the entrance revealed that the labyrinth was a monument to Howard McKee, one of Keiser’s business partners that helped procure the land for the resort, who died of cancer in 2007.  It eloquently pays tribute to McKee and reminds visitors of the spiritual meaning behind the labyrinth. 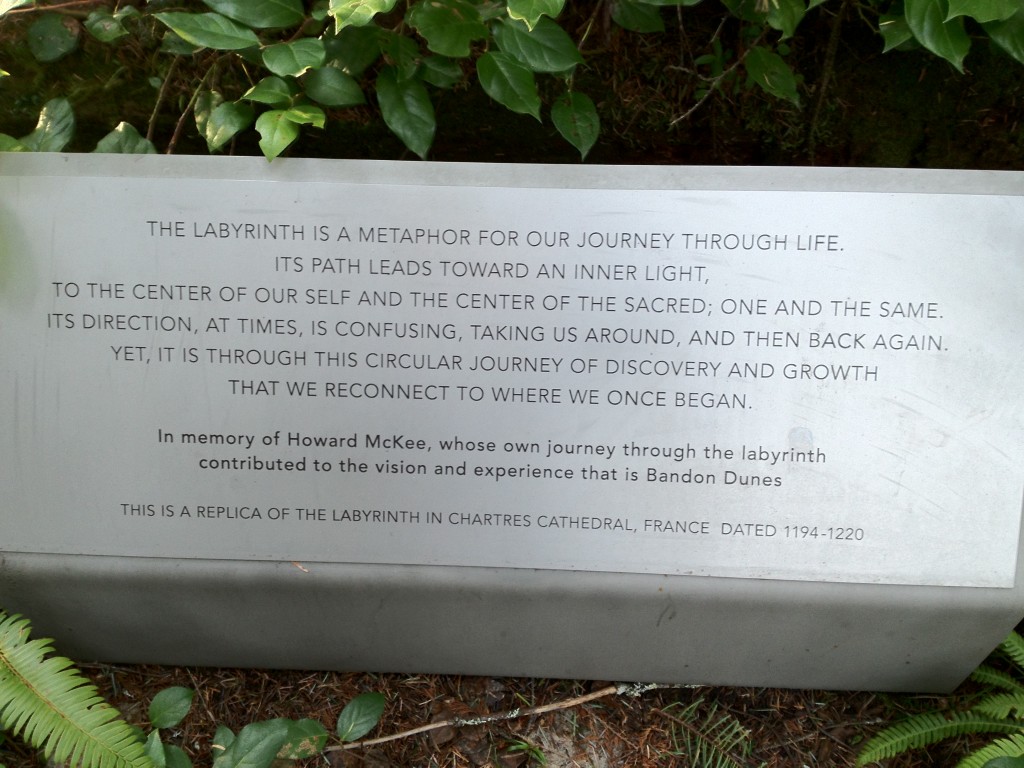 This plaque, in memoriam of Howard McKee, is a fitting tribute to the solemnity of the labyrinth

As we passed throughout the various portions of the property, I was struck by the overwhelmingly friendly service from the staff.  The bag attendants, shuttle drivers, front desk attendants, and restaurant servers greeted each guest with a smile. We were constantly asked where we were from and if we were enjoying our stay. None seemed unwilling to help us with whatever we’d need to fully enjoy our time at Bandon.

The food at Bandon is decent. I had heard wonderful things regarding the food at the property’s four dining establishments. In the end, perhaps spoiled by the bounty of the Bay Area food scene, I found most of the meals to be well executed and flavorful, but nothing stood out to me.  The drinks at Bandon are fairly priced, except for the Laphroig scotch!  Not sure who set the pricing on that one, but a 10-year old, entry level scotch from that brand should not cost $16. I don’t even pay that in San Francisco.

The Bunker Bar downstairs in the Lodge is a pure guys’ lounge.  Poker table, cigar smoking, billiards, and the best bartender on the property.  I highly recommend spending some time there, but realize your apparel will reek of cigar smoke afterwards.

In all, the resort is humble and no-frills.  The great thing is, that’s exactly what most of the golfers are looking for when they make the trip.  Because there are few spouses and children at the resort, activities and attractions for non-golfers are kept to a minimum.  So while it may not be the perfect family vacation destination, it’s as good as they come for golf trips.

Interestingly, I found that the overwhelming majority of guest were from the West Coast, mostly San Francisco through Seattle area.  In a sense, it feels like a hidden gem in the Pacific Northwest that most people can’t or won’t travel to.  And yet, with such worldwide acclaim, how can that be?  I am certain the resort sees its fair share of East Coast or international guests, but I suspect the place will always hang onto its small town local appeal, no matter how big it gets or how much it’s praised.

On Friday, while sitting in my room before our first round, I was pondering the experience I was about to encounter during my time at Bandon and was inspired to write the note below.  I can honestly say that I have been living by it ever since. 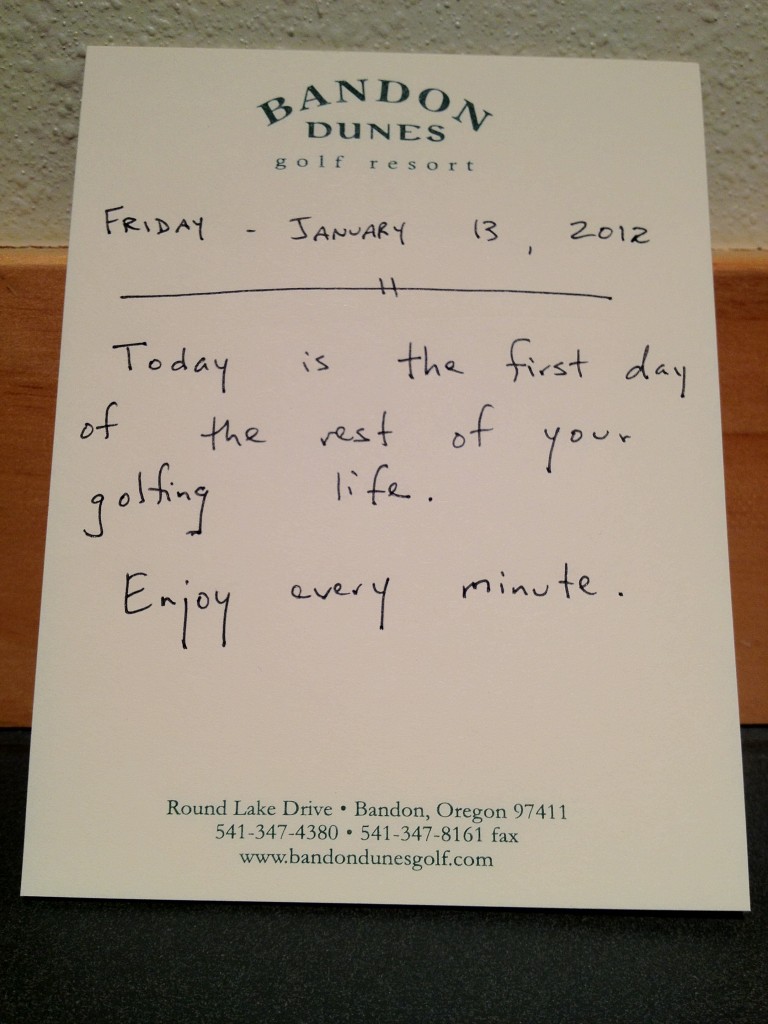