The idea was simple. Angelo Papadourakis was at the range after an early round of the 2006 PGA at Medinah. 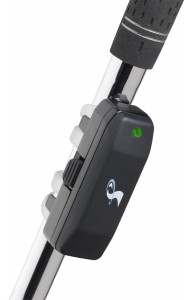 Bluetooth device, which weighs less than 3/4 of an ounce, attaches to club shaft underneath grip.

“Thomas Bjorn, who’d had a horrible day, was working with his coach,’’ Papadourakis said. “His coach was moving his club from position to position, teaching him like it was the very first time he’d picked up a club. Here’s a guy who’s won millions of dollars, playing in a major, and yet he still needs this type of feedback.’’

And so, Papadourakis said to himself: “Who am I to think I can hit a bucket and fix my swing? There has to be a way to get that type of feedback. I can’t have a pro behind me all the time telling me what I’m doing right and doing wrong.’’

From there, the SwingSmart was born. A small Bluetooth device attached to a golf club transmits data to the users’ smart phone or tablet. A readout shows things like swing speed, face angle and shaft lean. An animated display shows the swing from two angles, including a revealing overhead shot.

Swings are logged and stored with notations that allow a golfer to identify good swings that can be compared with future swings.

Who wouldn’t want to know all of this? 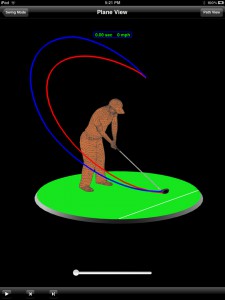 “When we were introducing the SwingSmart at the 2012 PGA  show, some pros came up and said, `Hey you’re trying to put me out of business,’ ’’ Papadourakis said. “I said, `Exactly the opposite.’ ’’

Not only would the SwingSmart be a great teaching tool during a lesson. It would allow a player to work more effectively on his game on his own, because he’d have quantifiable feedback.

Who wouldn’t want to know that?

The golf world is starting to get it. In its November issue, Golf Magazine gave the SwingSmart a “Techy Award.’’ Last year, it named the SwingSmart “Best app for Instant Feedback.’’

The SwingSmart is easy to use. Even before purchasing it, golfers can download the SwingSmart app to get a feel for it. The free app not only explains in surprisingly few steps how to operate the device. It also includes some training videos by Peter Kostis that show how to interpret the data provided by the SwingSmart and tips for improving your swing. 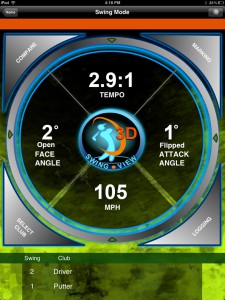 SwingSmart’s analysis screen is easy to use

At $249, the SwingSmart is not inexpensive. Considering how much players spend on a new driver or lessons, though, the cost becomes less of a hurdle. That’s even more true because it’s not a gimmick or a toy; it’s a device that works.

I’m not the biggest techy, but I found the SwingSmart easy to use. Attaching the device, which is as unobtrusive as can be, initially requires some finger dexterity. But once it’s on, it stays on, which is important. And the design of the software is very user-friendly. The Kostis videos are very helpful, and the system for logging and comparing swings is very straightforward.

Interestingly, the SwingSmart can be used for putting as well as full swings. I wouldn’t have thought of that, but put it like this: Wouldn’t it be helpful to log some putts when you’re putting well, and then be able to compare face angle and inside-out swing information at times when putts aren’t falling?

In short, this is an item that’s making golfers’ Christmas wish lists. Especially the ones who like to practice, and who are always looking for new game-improvement angles.