Joe Sheren and Tommy Asuma have consulted, and come up with several new exercises to help me generate more clubhead speed.

They range from a variation on the “Keep on Truckin’ ’’ walk we used to do in college, a tribute to cartoonist Robert Crumb, to making exaggerated golf swings with a 10-pound weight. 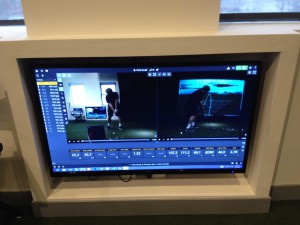 The swing feels better. So do the numbers.

When I can feel my hips straining and creaking, I know I am doing them right.

In another new set, I get on my knees with a wedge and make three hard swings, baseball style. Then I turn back as far as I can—to the right and then the left—pumping my shoulders a few times, pushing my creaky hips to the limit.

After doing this with a wedge, I repeat the sequence with a 6-iron, and then simply a shaft with no clubhead. The idea is to swing as hard as I can, with the whooshing sound as evidence.

Then I repeat the whole routine while standing.

Since I am lefthanded, the lefthanded swings generate more clubhead speed. Since I have played golf righthanded since I was a kid—except for a failed 2-3 year experiment decades ago—I ask them if I should use a golf grip or a baseball grip for the righthanded swings.

“Should I try a baseball grip when we hit golf balls?’’ I say.

I’m on board with that. I’ve always been a traditional Vardon-grip guy. It feels very comfortable. But with my right pinky on the club rather instead of wrapped over my left index finger, there’s no denying that I am generating more speed and power.

And it’s more of a hybrid than a true baseball grip. All I do is take the right pinky off the left index finger and put it on the club itself.

The grip change reminds me of my crazy softball days with Mike Royko, who was an excellent power hitter as well as the greatest newspaperman ever. “Take two and go to right,” Mike used to say, quoting somebody–can’t remember whether it was an athlete or another newspaperman. The point is, it was a philosophy of life, about the importance of adapting, rolling with situations.

I wouldn’t recommend a baseball grip to anybody else. And I’m not even sure I’ll stay with it. But it’s an interesting experiment for now.

This is one of the benefits of a comprehensive program where fitness/strength/flexibility are combined with traditional golf instruction. It also helps to have an instructor like Joe, who’s very good at analyzing and adapting on the fly. The grip change is my idea; I wouldn’t have done it without Joe signing off.

Rather than always pulling his drills from a script, he often has developed visualizations and techniques on the fly, depending on a particular student’s abilities.

After the hour of fitness drills, I go to the Trackman simulator with Joe, eager to see how the baseball grip fares at clubhead speed—and whether the ball goes reasonably straight.

Before I hit a ball, Joe suggests a pre-shot drill that connects the dots from the baseball swings to a golf swing. He has me bring the club back at a baseball level, but I stop at the point where my backswing breaks down because of my flexibility issues.

He helps me keep the club closed, then steps away—and I fire away. I do this again with a golf-style practice swing. Using a short backswing and a baseball grip, I make a really hard practice swing. 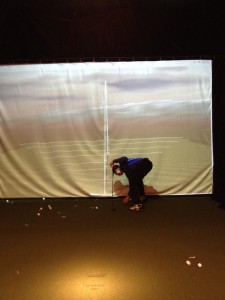 When I finally hit a ball, it’s the same result. Even though the club doesn’t go back as far, the combination of baseball grip and better angles with a short-armed swing produce significantly improved clubhead speed and distance.

Not only that. This is a compact swing I’m more likely to be able to repeat. It’s an easier move to make. And with the added power I’m feeling from the baseball grip, my brain is letting me table my longtime impulse to wrap the club around my neck in an effort to generate speed.

This is strange. After all those stumbles, a baseball grip and a dedicated workout regimen are providing some positive results.