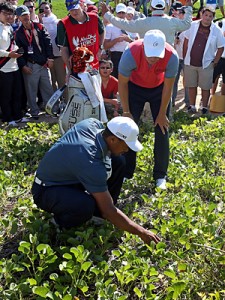 Based on what happened in the second round of the Abu Dhabi Championship, evidently Tiger Woods and Martin Kaymer didn’t realize the full extent of what constitutes an embedded ball, but another armchair rules expert, later identified as writer Alistair Tait, who was watching did and brought it to the attention of the European Tour rules officials.

Woods, apparently still having trouble with his driver, sprayed his tee shot at the fifth hole right of the fairway and into vines in a sandy area. He thought the ball was embedded and players can get free relief in such cases. He called over fellow competitor Kaymer, who also agreed. So he took a drop and chipped out to fairway, making a bogey.

The rule is very specific saying: A ball is embedded in its own pitch-mark in the ground in any closely mown area, defined as any area of the course, including paths through the rough, cut to fairway height or less.

For a ball to be embedded, it must be in its own pitch-mark with part of the ball below the level of the ground. However, the ball does not necessarily have to touch the soil, grass or loose impediments may intervene.

The European Tour and most other major events use a local rule that extends relief through the green, any area of the course except hazards. The exceptions to this local rule is that it doesn’t apply to balls plugged in sand like Tiger’s ball or if other conditions make a stroke clearly impracticable.

Rules official Andy McFee–no kin that I know of–indicated the rule was very specific and applies to balls embedded in the ground, not the sand.

“I thought my ball was embedded so I called Martin (Kaymer) over,” Woods said. “He agreed. Evidently it was sandy-based and it doesn’t call for an embedded ball there.” Woods accepted the ruling, saying that McFee knew what he was talking about.

If two of the top players didn’t know the correct procedures, it makes me wonder that perhaps other fellow competitors may not know either and perhaps some may have taken relief when no cameras or armchair rules experts were around.

With the two-stroke penalty for an incorrect relief procedure added to his total, Woods missed the cut by one stroke along with Rory McIlroy in their much talked-about head-to-head 2013 debuts. While obviously not satisfied with their performances, both left with millions of dollars in their pockets from guarantees to play.

Looking at other decisions related to the embedded ball rule, a player’s ball is considered embedded if it spins back into its own pitch-mark, but only from the prior stroke. The embedded ball rule also applies when a player takes a drop and the the ball plus. If this happens twice, the player may place the ball as near as possible to the spot where it embedded.

What happens if a ball is embedded in the side of the hole? It is considered holed only if all of the ball is below the lip of the hole. Otherwise, the ball must be placed on the lip and then holed.