One of the major changes in the modernized Rules of Golf that will take effect next year  will allow a local rule that permits committees to allow golfers an alternative to the stroke-and-distance penalty for lost balls or balls hit out of bounds.

Golfers can opt to drop the ball in the vicinity of where they lost or hit the ball out of bounds—including in the nearest fairway area—with a two-stroke penalty under the local rule, which is not intended for professional or elite-level competitions. 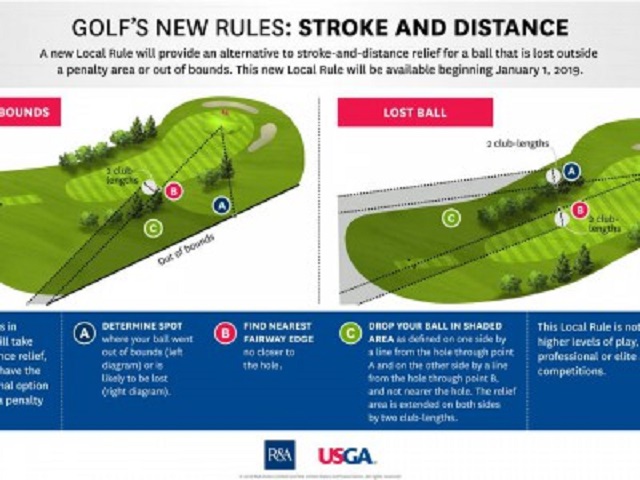 “This addresses the issue you hear at the club level about the practical nature of going back and playing under stroke and distance just doesn’t work,” said Thomas Pagel, USGA senior director of Rules & Amateur Status, pointing out it had a negative impact on pace of play.

“You simply estimate where it’s out of bounds or where you ball is likely to be lost, you can go all the way out to the fairway and drop anywhere behind… But the primary objective here is to keep the player moving forward, and we think that’s the real benefit of this.”

The governing bodies also decided to drop the penalty for a double hit, allowing golfers to simply count the one stroke they made to strike the ball, something that had not been introduced previously.

Thank goodness, two other originally proposed changes have been amended. Instead of allowing  drops for relief to be done as close as two inches above the ground, players will be required to drop from knee height. Pagel said this seemed a fair compromise, helping simplify the dropping process while preserving the randomness of a drop.

Additionally, the provision that outlined a 20-inch and 80-inch standard measurement for taking relief returned to the two club-length standard, using the longest club in your bag.

“I think of all the changes, that one is the real concrete example of we listened,” added Pagel.

“Because the fixed measures, philosophically, makes total sense, but from a practical standpoint with people saying ‘I’m scratching my head a little bit, I’m not sure how I’m going to measure this,’ we had to step back and say, OK let’s change. It’s a lot easier if I just use my club length. And so we just went back to the drawing board.”

While getting many requests about finding a way to provide relief when a ball comes to rest in the fairway in a divot hole, the governing bodies stood firm on the notion that this was something too fundamental to change.

“One of the primary objectives for the overall initiative is to make the rules easier to understand and apply, but to also make sure we maintained the traditions and principles behind the game,” Pagel said. “And the principles are to play the ball as it lies and the course as you find it. So to write a rule that allows a player to sort of deviate from that, was not something we were wanting to do.”

We’ll have to take closer looks at all of the new rules in the next nine months to prepare for 2019, but several updates outlined in last year’s proposed rules will remain in place, including two fewer minutes to search for a lost ball, elimination of penalties for accidentally moving a ball on the green or during a search, allowing for the removal of loose impediments and touching the ground in hazards, and fixing spike marks among other relaxed procedures on greens and in bunkers.