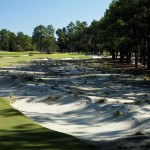 Based on some early reviews, it appears Pinehurst No. 2 may regain even a bigger following with modern day golfers after they get to see what Ben Crenshaw and Bill Coore did in turning back the clock to reflect how it was intended to be played when Donald Ross created it more than 100 years ago.

At the official reopening the Monday after the Masters, Robert Dedman, owner and CEO of Pinehurst, said, “I think they’ve been able to capture the true intent of Ross on this golf course.

Dedman admitted that he and others viewed No. 2 as Ross’ masterpiece and knew that making changes could be dangerous. “It’s like messing with the Mona Lisa. We all realized it would be the smartest thing we’ve done, or the dumbest thing we’ve done.”

“We could have continued with the status quo, but we felt something was missing,” added Pinehurst President Don Padgett Jr. “Pinehurst was always meant to stand apart, to embrace its natural elements and to offer a unique atmosphere of creativity. We felt the time was right to embrace the original character of No. 2.”

Dedman admitted that Pinehurst officials probably had moved in the wrong direction for No. 2 with all the modern day emphasis on wall-to-wall grass and a sea of green “So we wanted whatever changes we made, we wanted to make sure they were authentic and genuine and consistent with the legacy,” Dedman said. “Secondly, we wanted to make sure whatever we did was more esthetically pleasing,”

Both Pinehurst officials admitted the restoration probably wouldn’t have been undertaken without the involvement of Crenshaw and Coore, who both thought so highly of the course.

“We just hope that if Donald Ross could see it, that he’d be pleased with what we’ve done,’ Crenshaw said, noting that they largely just uncovered what was on the ground before instead of making major changes.

Using the 75-year-old center irrigation lines and marking perimeters 40 feet on either side, the pair was able to see the shapes of the holes change considerably, uncovering more diverse angles of play and greater variety of tee shots and lines for approaches. The result also was wider fairways.

Then they stripped all the grass away from the rough bordering these new fairways to reveal a natural sandy area common to this area of North Carolina. They added 100.000 wiregrass plants to these waste areas. Bunkers were also restored and reshaped liked they looked 70+ years ago. Adding their two cents worth, a bunker was eliminated at the corner of the dogleg on the 7th and another one added on the 13th.

The greens, which were always the course’s main defense against low scores, remain basically unchanged except for a different blend of bent and a couple of tweaks on the 15th and 17th that should open more pin locations. Approach shots tend to roll off these “turtle back” greens and getting up and down is difficult.

Pinehurst officials did consult with the USGA and get its blessing about the radical renovation since the course will host both Opens back-to-back in 2014. Eight new tees were added to the championship course, stretching it from 7,214 to 7,491 yards. Two of the par 5s for members and guests (Nos.8 and 16) will be played as par 4s for the championships.

Mike Davis, the new executive director of the USGA, gave his blessing to the restoration, saying, “My mouth literally falls open when I see the incredible work that they’ve done. I’ve got to say, I’m so excited about 2014 because it’s going to be a very unique U.S. Open.”

Padgett indicated that Davis was of the opinion that the No. 2 green complexes can defend the course and did not seem worried if somewhere in the higher single digits or even 10 under par might be needed to win—a change from past administrators who liked to keep the winning score right at par for 72 holes.

Speaking about how the game’s best players will see a different type of test with fast and firm fairways and no rough, Crenshaw said, “Luck will be involved. You could have a good lie in the sand or have problems with the wiregrass. You had zero chance to recover from the deep rough.”

No. 2 might be more fun to play for members and guests willing to pay big bucks for the right to walk where the game’s best have, especially if players use the correct set of tees for their ability levels. I played from 6,307, but wished I had gone to the green tees at 5,838 more than the two times that I did. Tee options are also offered at 6,930 and 5,231 yards. It’s hard to lose balls, especially with a caddy around. However, expect to have your short game tested and be prepared to even see a chip miss the green. Remember, it has happened to the pros, too.

Having had knee replacement surgery three months earlier, I did find that it was a little distracting to have to park the golf cart on the mostly sandy cart paths out in the woods and walk to the ball, sometimes with the wrong clubs. The fore caddy wasn’t as helpful since he was also carrying the bag of another player who was walking. My knee was really hurting after play and I spent some time with an ice pack on it before dinner. Walking as I had done on my previous round 36 years earlier would be my choice when I return and my knee is better.

While the final verdict on the restoration is still out and even Crenshaw said it needs time to evole, No. 2 will definitely not play like your course back home!

One Response to “Pinehurst turns back the clock on No. 2”