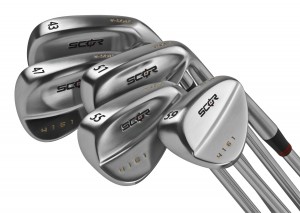 While there were all kinds of interesting things to see at the PGA Merchandise Show, the one thing that caught my eye was an interesting new concept being offered by Texas-based Terry Kohler of SCOR Golf, a division of Eidolon.

If Kohler’s theory about the short game concept catches on, I can envision a 14-club set made up of the following in the future: putter, driver, fairway wood, two hybrids to replace the long irons (something already being done even on the PGA Tour), 5 thru 8 irons with lofts of 27 to 40 of your choice and five of the custom-made SCOR golf clubs, featuring 21 different lofts from 41 to 61 degrees .

Kohler believes his products will make an impact on the performance of golfers in the scoring zone just as the hyubrid did on the other end of the set.

“Short irons that work like the middle irons don’t work as well as they could,” Kohler said, pointing out the difference between a 6-iron and wedge is much like that between a 5-iron and a fairway wood.

The clubheads are forged of a mild carbon steel, which is preferred by most tour professionals. There are seven distinct head designs for every 3 degrees of loft. The lower lofts have a little more heel/toe weighting, top lines Shawn Dinwiddie, and higher centers of mass that will not let the ball climb up the face as much, thus producing a lower flight, while the higher lofts have a progressively lower center of mass for more ball-stopping action.

The patented V-Sole can handle any lie on any course, ac cording to vice president Shawn Dinwiddie who chatted with me in Orlando. The leading edge of the sole has a high bounce that prevents digging in softer turf or for more delicate pitches around the greens while the primary portion of the sole has a low bounce for tight lies and shots from the fairway.

Dinwiddie also noted that the shafts found on a lot of wedges are too stiff. Working with KBS Tour and UST Mamiya, SCOR offers two weights of graphite or a standard weight on steel with two or three flex options that are softer in the middle sections and stiffer in the tips.

In addition, the grips designed in conjunction with UST Mamiya feature a firmer material with a soft cord embedded for secure club control in the upper portion and a softer material in the lower portion of feel and touch around the green.

It appears innovation seems to come from small companies not afraid to challenge the status quo. Looking back at almost 40 years of involvement with the golf industry, t’ve seen what Ping, TaylorMade, Callaway and Adams did in brining revolutionary different concepts about club designs .

Terry and Shawn have convinced me that their comprehensive re-design of the scoring clubs is worth trying and I plan to actually test them out for myself.